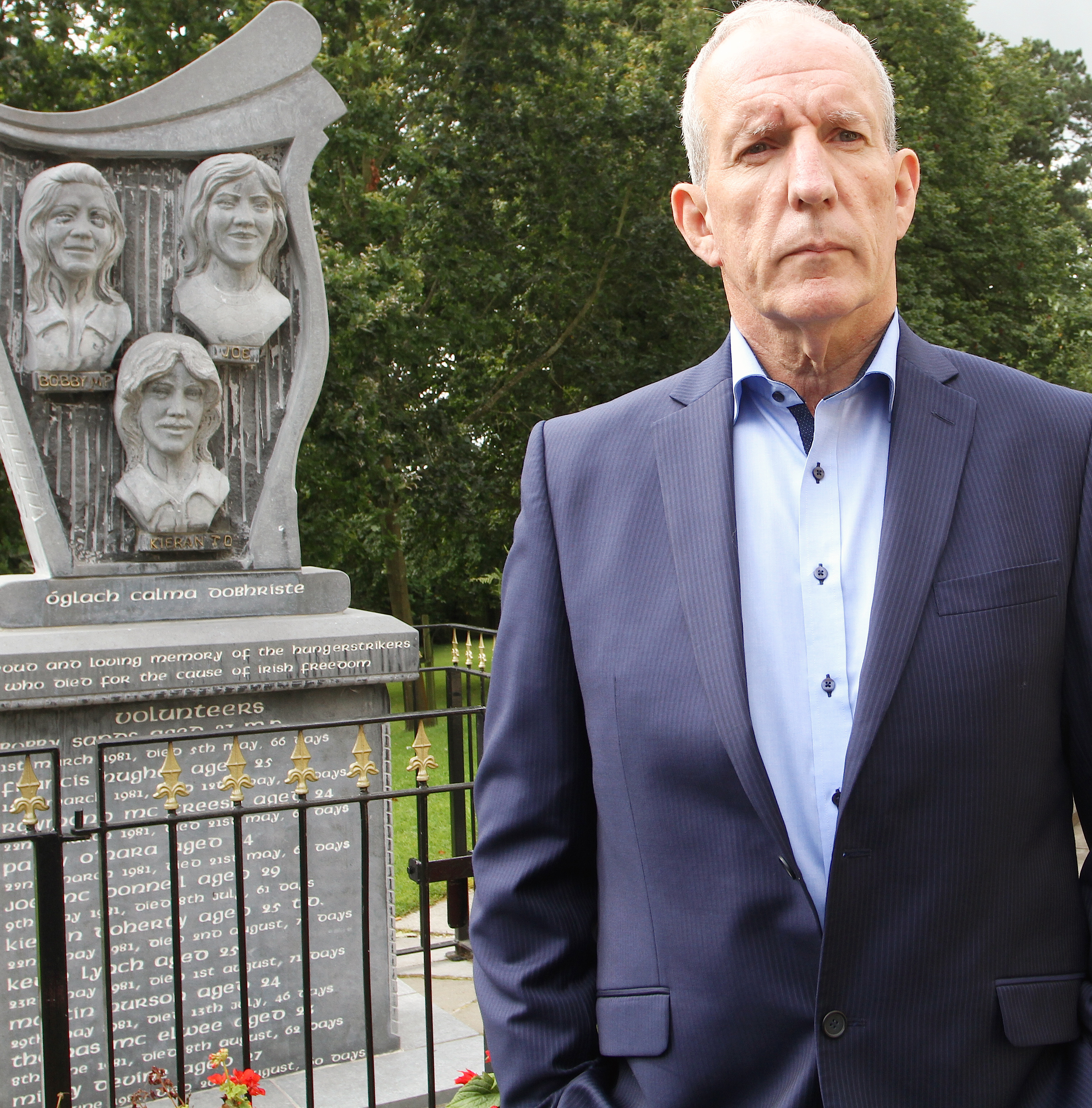 Bobby Storey was warned of a death threat against him as he left Antrim Serious Crime Suite last Thurday evening, the northern Chair of Sinn Féin has revealed.

The West Belfast man was questioned for over 30 hours by detectives in connection with the murder of former IRA man Kevin McGuigan.

However, Mr Storey doesn’t believe the threat has anything to do with the murder of Mr McGuigan in Short Strand on August 12, but is a direct result of his arrest and the political fall-out that has followed.

The DUP followed the UUP out of the Stormont Executive after Mr Storey’s arrest and now talks to ressurect the instutions are floundering after Secretary of State Theresa Villiers refused to accede to unionist preconditions in a House of Commons address yesterday.

Speaking to Daily Belfast about the death threat which police handed to him as he left Antrim, Mr Storey said: “It has added to the distress of my family.

“I believe that threat is a direct result of last week’s unjust and wrongful arrest. I believe it has nothing to do with the death of Kevin McGuigan but that it has to do with the charade that we have publicly seen play out in the last week.”

He said his arrest and release were all part of “a sorry charade around the murder of Jock [Davison] and Kevin”.

“It was something I should never have been arrested for.”

He added: “I totally reject these scurrilous allegations around my arrest and any suggestion that I personally would do anything to damage the Sinn Féin peace strategy or the peace process that we have worked so hard to build and advance.

“Let me be very clear, the people who carried out these killings, whether they are individual criminals or gangs like Action Against Drugs – who are a hybrid of pseudo republicans, criminals and extortionists – are anti-republican, indeed anti-community.”

The Andersonstown man said no evidence was put to him or his solicitor during his time in Antrim.

“There was nothing about the actual murder of Kevin McGuigan that was in any way specific to me, generally speaking any questions that were put about his death could have been put to anyone, really.

“An example of questioning involved a detective telling me that particular people believed I was involved in this murder. My solicitor asked the detective what was his basis for saying that – did someone make a statement to the police to that effect? The detective looked to his interviewing partner for support then said to us: ‘No, I think I heard it on the TV, on a news programme or something like that.’

“My solicitor continued to challenge this ridiculous basis for questioning me. Much of the questioning was quite bizarre.

“Over the two days there were around eight lengthy interviews. There was nothing said to me which in my opinion and in the opinion of my solicitor which warranted my arrest.

“My solicitor regularly raised the absence of any evidence, the length of interviews, the time-wasting gaps between interviews and the repetitive nature of the questioning.

“It would be common for my solicitor to ask was a particular question based on intelligence only to be told, ‘No it’s an opinion.’ An example of how time was taken up was when my solicitor interrupted a detective who had been giving us a ten-minute narrative on me and my history to ask, ‘Is there an actual question at the end of this?’”

Mr Storey remains adamant that a number of unionist politicians and sections of the media had received briefings from the police, given their utterances before his arrest.

“Over the course of my detention I and my party were subjected to trial by media as a result of those briefings,” he said. “The basic rule on which the justice system is built, the presumption of innocence, was discarded and wild accusations and allegations were being presented as facts. For some, it seems that backroom briefings from security sources were taken to be fact and reported as such.

“I have grave concerns at both the nature and timing of my arrest. There are also concerns that unionist politicians and sections of the media appeared to have advance knowledge that I was going to be arrested. The fact that it came at a highly important time politically when we are involved in talks also raises many questions.

“We are determined to see those questions answered and that is why Sinn Féin is seeking a meeting with the PSNI Chief Constable. We will also make him aware of the deep sense of concern within the republican community surrounding my arrest.

“We will use the accountability mechanisms which Sinn Féin have secured in relation to policing in order to have these questions answered. We worked hard with others to ensure those mechanisms are in place and I now intend to use them.

“In addition to those, I have instructed my solicitor, John Finucane, to begin legal proceedings against the Chief Constable.”

The former IRA prisoner, who spent 20 years in jail, said it has to be remembered that there are two grieving families who deserve justice.

“The murders of Jock Davison and Kevin McGuigan were criminal acts and those responsible should be brought before the courts,” he said. “Sinn Féin has publicly called for anyone with information to come forward to the PSNI and I repeat that call today.

“The only way to deal with these killings is through the criminal justice system.

“Over the course of recent years I have played a significant role in the development of Sinn Féin’s policy in support of an accountable police service and of working political institutions. My commitment to that remains fast and neither I nor my party will be deflected from that by the actions of criminals.”

While unionist politicians are calling on Sinn Féin to admit that the IRA is still in existence, at a press conference in West Belfast on Sunday Bobby Storey said the PSNI Chief Constable, George Hamilton, viewed the IRA was a caterpillar. As far as he was concerned it had turned into a butterfly that “flew away”.

Speaking to Daily Belfast, Mr Storey repeated his belief that the IRA “has gone away”.

“It has left the stage and is not coming back,” he said.

“People living in republican communities across the north know that to be the case.

“Unionists may want to continue looking for the non-existent IRA bogey man, but the fact is that the IRA has gone.

“This whole contrived crisis has been about the cynical manipulation of two criminal acts for narrow electoral gain by unionist parties.

“The fact is that Sinn Féin are in the power-sharing institutions because we want to be, unionists because they have to be.”

Asked where he thinks the way forward is from here, he said: “Well, I am not sure cynics can be convinced, they are, after all, cynics. But I look at it like this: the conditions and circumstances that gave rise to the emergence of the army (the IRA) are gone, the Orange State is gone.

“The IRA left the stage, as articulated by Séanna Walsh in 2005, and not only was that the right thing to do, it happened.

“I also think there is a clear logic about this, there is no actual role for the IRA. Look at attempts in recent years by others to invent other charlatan so-called IRA groups. Every one of them quickly fell into a confused mess of in-fighting, splits, criminality, extortion and vigilantism with new groups being announced every other month. In the absence of historical context that was always the way that would go and they have become another blight on our community.

“It is not up to Sinn Féin to convince anyone. What we are saying is fact. Others may choose not to accept it because it does not suit their narrative or agenda, but that does not change the fact.”

He added: “The people responsible for these murders are criminals and the enemies of the Sinn Féin peace strategy. The familes of both these men are entitled to and deserve justice.

“Sinn Féín has publicly supported the investigations into these killings and have called for anyone with information to come forward to the PSNI. That remains our position.

“We want to see full and robust police investigations, free from any interference, so those responsible can be brought before the courts.

“The cynical exploitation of these killings by unionist politians has been absolutely shameful. Their actions have nothing to do with concern for justice or for the Davison and McGuigan familes but instead are about a squalid battle for votes between the two largest unionist parties.”

Mr Storey said Sinn Féin will approach any new round of negotiations in good faith to find a resolution.

“Sinn Féin entered into this talks process in a constructive mode in order to find a resolution to the difficulties currently facing the Executive. We want to see resolution on the basis of the Stormont House Agreement, including welfare protections and issues around the legacy of the past, flags and identity.

“We expect other parties to meet their commitments on the implementation of the Stormont House and previous agreements and we want to achieve a workable budget.

“That is how Sinn Féin has approached all of the negotiations we have been involved in throughout the peace and political processes and this is no different.

“The two governments also have a role and a responsibility as co-guarantors of the Good Friday and subsequent agreements to work to safeguard the political process in the north, not undermine it.”