Burnett enjoying the build-up ahead of world title challenge 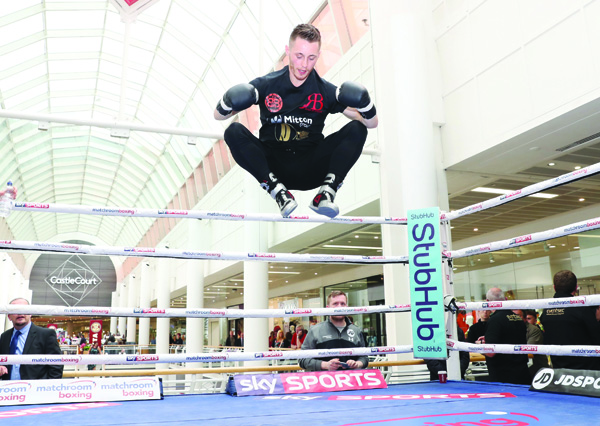 FLYING HIGH: Ryan Burnett said he is enjoying the build-up to his world title shot on June 10 at Monday’s public workout

RYAN Burnett says he is enjoying the build-up ahead of his IBF bantamweight title challenge to Lee Haskins at the SSE Arena (Odyssey) on June 10.

The Newington man took part in a public workout in Castle Court on Monday as the Belfast public got a glimpse of what they can expect from the 25 year-old who is aiming to become the city’s latest world champion.

“There is such a buzz now and it’s great that everyone is being so positive about it,” he said as he stepped out of the ring.

“It’s great. I was thinking to myself, ‘what’s it going to be like going to the Odyssey because I’ve built myself away? Is it going to sell?’ I had those questions in my head and thank God, ticket sales are going brilliantly, everything’s going perfect so it couldn’t be better.”

Burnett has appeared on several big shows including Carl Frampton v Scott Quigg in Manchester last year, but now it is he who is the centre of attention with the added element of the prize on offer.

While there will be an expectant crowd in the arena in just over two weeks, the undefeated Belfast man says he relaxed as his big night closes in.

“You would think it would bring a bit of pressure and I would be thinking differently, but I’m not (feeling it) strangely enough,” he countered.

“I’m looking at this fight as just another fight. Because of what’s on the line, I’m not getting anxiety from it, I’m enjoying it more. I know plenty of fighters says that, but I genuinely am enjoying this whole experience.

“I have never done anything of this magnitude before where it has been solely about me, but now it is. It’s really great and I’m enjoying it a lot.”

It is certainly not a straightforward assignment for the 16-0 Burnett who faces a vastly experienced champion in Haskins who has held British, Commonwealth and European titles before annexing the world title last year.

The 33 year-old southpaw has lost just three times in a 37-fight career with his last defeat occurring against Stephane Jamoye in Belgium back in 2012 and has another Belfast man, Luke Wilton in his wins column with a second round TKO back in 2014.

Burnett is respectful of the Bristolian, but confident he will get the job done nonetheless.

“I think I have the qualities to beat Lee Haskins,” he predicts.

“In fact, I know I have the qualities to beat him. It’s just about doing it on the night.

“Lee Haskins is a great champion and has only been beaten once in the last nine years, so you help but respect that.

“It speaks volumes in itself, so I know what kind of work I am going to have on the night. It’s something that every fighter builds themselves up for and something every fighter prepares themselves for, so I’m definitely looking forward to this one.”

There is a host of local talent on the card with debuts for Padraig McCrory and Sean Magee, while Paddy Gallagher returns to action and title fights for James Tennyson and Paul Hyland Jnr expected to be made next week while the hugely intriguing cruiserweight showdown between Tommy McCarthy and Mike Perez was added earlier this week.

Some of the boxers were present at Monday’s workout and Burnett is delighted to be bringing the big nights back to his home city.