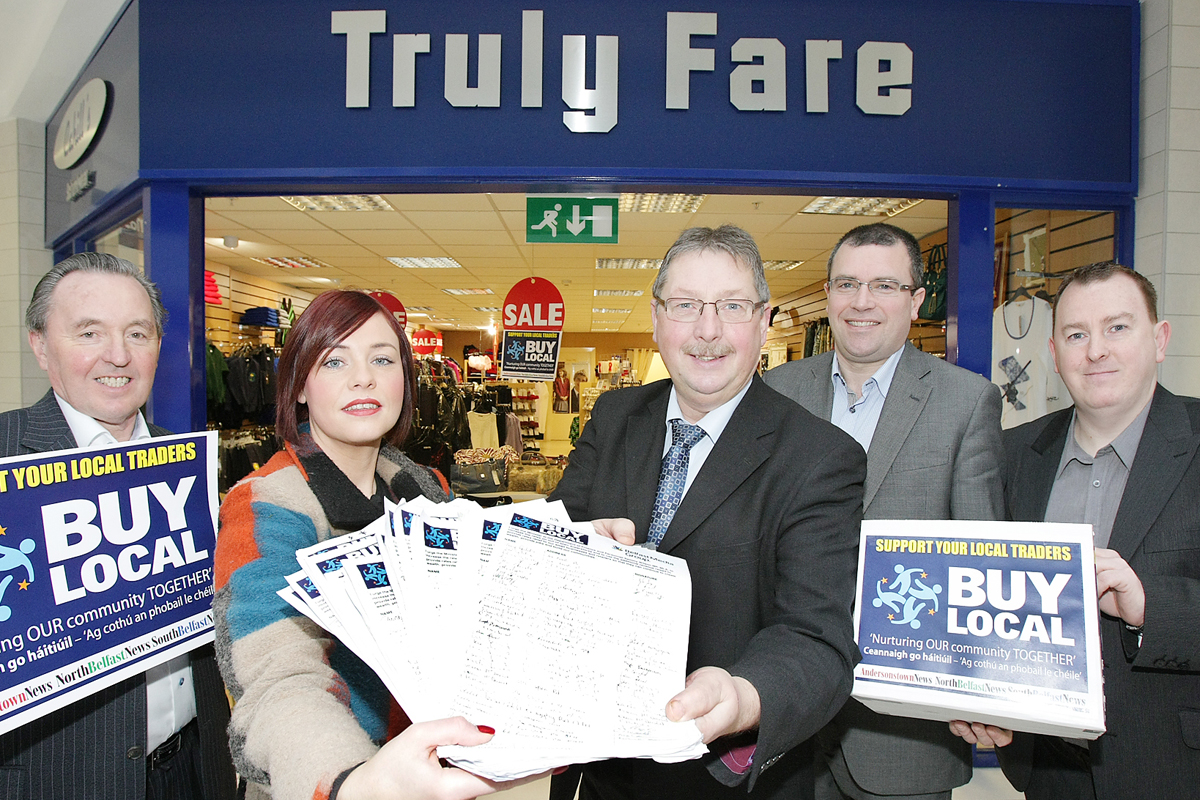 The publishers of the South Belfast News, Andersonstown News and North Belfast News offered readers the chance to throw their weight behind the campaign to spend money locally and help keep small business afloat in some of the toughest economic conditions in living memory.

Mr Wilson took the bold step of visiting the Kennedy Centre in the heart of West Belfast to receive the petition from representatives of the BMG, including Gerard Mulhern, who headed the campaign. Those who signed the petition support the minister’s legislation which aims to impose stiffer rates on larger big-name supermarkets, aiding smaller traders at the same time.

Although the deadline to sign the petition has passed, the BMG will be keeping its Buy Local campaign to the fore, in support of local business owners right across the city.

The minister ducked into local shops, including clothes outlet Truly Fare, to hear the concerns of traders at the coalface of the local economy.

“Anything at all that means a bit more money in our pocket to keep businesses afloat is to be welcomed,” she said.

“Mr Wilson was very sympathetic to our plight, and was explaining how the legislation would work.

“However, this move certainly won’t fix the problem overnight, as despite the help it will bring, we continue to face hefty rises in water, electricity and VAT.”

Minister Wilson said he was pleased to accept the petition, which endorsed the Executive’s decision to expand the small business rates relief scheme that would be funded by a levy on large retailers.

“I know that small businesses in particular are struggling and I fully support the ‘Buy Local’ campaign. The Belfast Media Group has provided a platform for local people to voice their concerns in organising this petition.

“The people I met at the heart of our local communities have demonstrated a commitment and determination that they will continue to work hard at maintaining their businesses and it is hoped that the change in the commercial rating system will assist in alleviating some of the severe financial pressures that these small businesses are facing.

“The policy changes aim to rebalance the rating system for a finite period during the economic downturn, helping to create the right conditions for recovery, and broadly double the amount of rate relief provided to small businesses.”