Captured on the canvas of a glass window 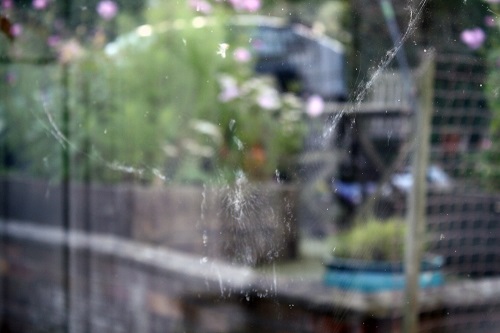 THE afternoon silence was shattered by a loud thump on the window and Dúlra jumped from his armchair, almost spilling his mug of tea.

He knew immediately what it was – a bird. The odd one still flies into the conservatory window despite it now being covered with clearly visible stickers. Maybe it’s the angle of the setting sun that makes the glass invisible at certain times because there is still an occasional collision, and Dúlra will find a stunned bird on the ground below, frozen like a wax model. He’ll pick it up and take it inside, where it’ll eventually spark into life as if it had just thawed out.

But this noise wasn't like the others. It was a helluva thump. Maybe it was one of those damned pigeons that sweep up all of Dúlra’s bird seeds.

Dúlra went out and checked the path. Whatever had hit the window had disappeared. He would never know what it was.

He looked at the glass to see if there was any sign of impact, and what he found was truly amazing.

The bird had left a perfect imprint like a film negative. Its form was etched on the glass as if it was sketched with a pencil. You could make out every single feather, right from the beak to the tip of its wings. And you could even see details within the feathers themselves – some smooth, some barred and ragged.

It was like something the great Leonardo da Vinci would have drawn – although a phone camera doesn't do it justice.

The shape of the bird as it hit the window was the most remarkable thing of all. Its wings were curved beautifully upwards in an arc as it smashed against the invisible wall.

This was no pigeon. This was the ghost-like image of a sparrowhawk, painted by its well-oiled feathers.

With a camera-like imprint like this, Dúlra could recreate the scene like Columbo at a murder scene. And indeed, with a sparrowhawk, death will never be far away.

A flock of goldfinches are a permanent feature of the garden now that summer has ended and the sunflower heart feeders are well stocked. Up to a dozen of them will fill their stomachs – sometimes four hanging on the same wire feeder.

They were too tasty for the sparrowhawk, spioróg in Irish, to resist. It must have swept in over the hedge, making sure to keep low so the goldfinches wouldn’t have seen it until it was a few feet away.

Then they scattered to the four winds in terror.

If the hawk then crashed into the window, did the goldfinches also? Dúlra looked closer.

There were two smudges either side of the hawk’s image. Both had tiny red feathers from the goldfinches’ faces.

In their terror, they must have bolted straight into the glass, followed by the hawk.

It wasn’t that the glass was invisible, but in their terror the goldfinches hadn’t time to think. They just darted – like a person crashing into a lamppost to avoid a car.

It was only the next day that Dúlra discovered a mound of beautiful and delicate goldfinch feathers on the grass. The sparrowhawk obviously wasn’t hurt by crashing into the window and managed to get one of the finches, maybe even one that had been stunned by the window.

And Dúlra is left with the ghostly image of a killer in full flight.

Joseph Spreight, Cliftonville Road: “This is the wee visitor who comes into my back garden every night – and it’s very tame.” Dúlra writes: You’re very lucky Joseph – hedgehogs are beautiful animals – and they’re getting rarer.