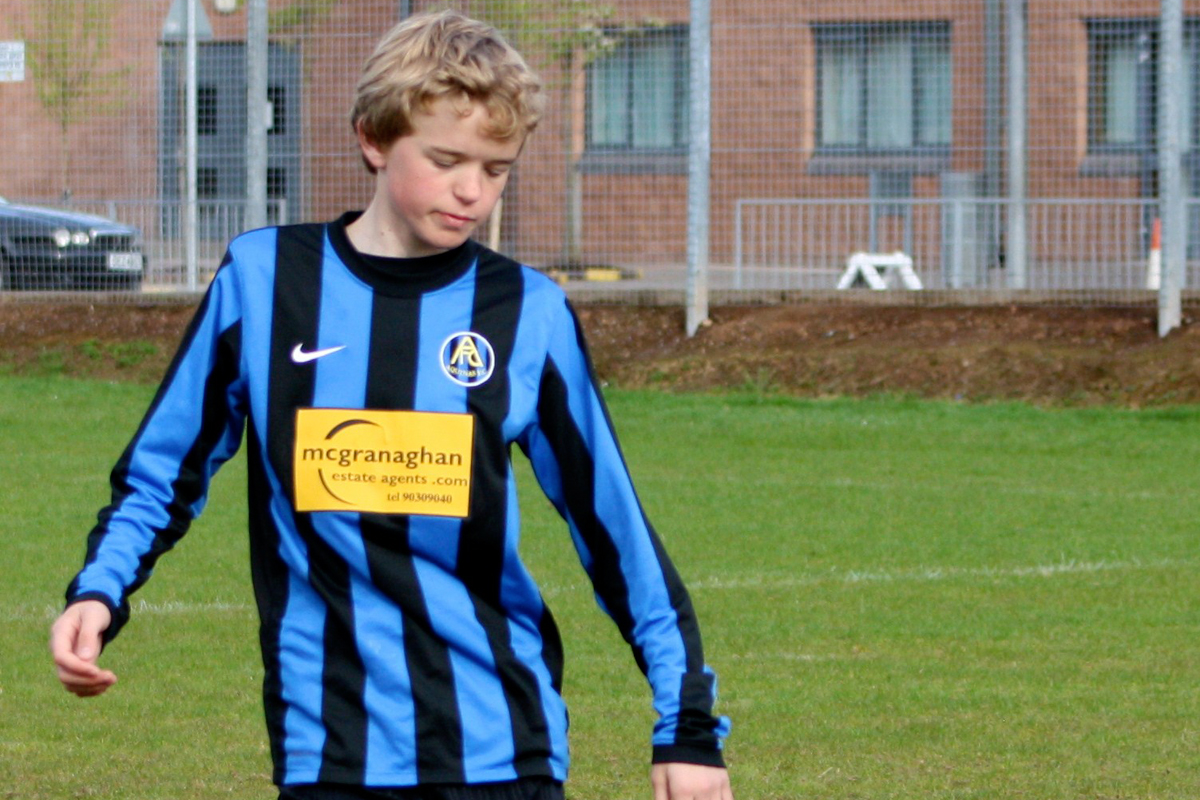 Having failed to shine during their last two outings, Aquinas would undoubtedly have been satisfied with any sort of victory over a decent Ridgeway team at sunny Strangford Avenue on Saturday.

To emerge with all three points in the face of such adversity though was extra special.

Reduced to ten men from as early as the tenth minute, after the harsh sending off of left back Thomas Cafolla for his role in some handbags after he shipped a dangerous tackle, the Blue ’n’ Blacks steeled themselves for an uphill struggle.

Striker Conor Toner epitomised the spirit of the team with a masterly display as emergency full back in a re-jigged formation which rode out a bit of a storm, during which Niall McCourt miraculously cleared off the line, before getting a strong foothold in the game in the run up to the break.

Ciaran Mohan started to boss proceedings from the centre circle with Joe Cunnane providing spark on the right as the numerical disadvantage became much less evident as time went on.

In such a tight match, the first goal was always going to be important and on the half hour it was Aquinas who stole ahead in familiar fashion as, for what must be the 100th time in his career, a Matt Carson corner found a teammate’s forehead.

This time the beneficiary was Conor Flynn whose bullet header gave the keeper no chance.

The breakthrough provided a visible boost to Aquinas and within five minutes the lead was doubled with corner assist number 101 from skipper Carson.

This time it was Tom Maguire who nodded it in at the far post to get his just reward for a great day’s graft leading the line on his own.

Following this double whammy the interval came at a good time for Rovers, who regrouped and came out for the second half with renewed vigour.

Within five minutes the deficit was halved with a cool finish after some pinball in the Aquinas box.

Again though Aquinas dug in and some big displays from people like Cormac O’Hanlon and Dan Rainey ensured the balance did not tip in Ridgeway’s favour.

The clincher came on the hour mark when, remarkably for the third time in the match, a towering header from a perfectly delivered corner found the net.

This time though the architect was Matt, of the Hughes variety, who picked out Paddy O’Boyle in the six-yard box for déjà vu.

Back though came Ridgeway and only a fine block from Hugh O’Connor, coupled with a wonderful left handed save from Kevin McGovern, protected the two-goal cushion for Aquinas who almost pinched a fourth on the break when a great strike from Martin Beeton was hacked off the Ridgeway line at the death.