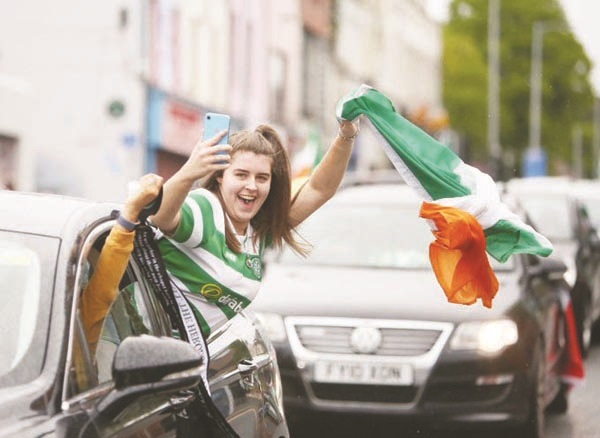 CELTIC have been crowned Ladbrokes Premiership champions for a ninth successive time and their manager, Neil Lennon, is already thinking about an unprecedented 10th consecutive title.

On Monday, SPFL clubs reached a unanimous decision that the season could not be concluded in the mist of the global Covid-19 pandemic, with Celtic crowned champions while Hearts have been relegated with the remainder of the games settled on a points-per-game average.

The season was halted on March 13 because of coronavirus, with Celtic 13 points clear of Glasgow rivals Rangers, having played one game more while Hearts were four points adrift of Hamilton at the foot of the table.

The announcement sparked celebrations for Celtic fans across the world and, locally, Belfast’s Celtic supporters clubs organised a cavalcade up the Falls Road for fans to celebrate the club’s historic achievement.

Lennon praised the club’s legendary support and hopes they’ll have even greater cause for celebration at the end of next season.

“Even when I took over and we got to eight, people were talking about 10,” said Lennon.

“We had to get the nine first and thankfully that's been accomplished now.

“We can go for 10 now, because I know that's been on the tip of a lot of our supporters' tongues.

“Together we have shown that we are a powerful force and once again the best team in the country.

“It has also been an honour to work with such a special group of players, a squad crammed with talent, spirit, strength and resilience.

“As manager of this great club it has been an honour to deliver your ninth successive title win. I could not have done this without John Kennedy and Damien Duff and thank both of them for their support.

“I returned to Celtic to win. In the tradition of our club I wanted to bring you positive, exciting football, to give you goals, an attacking, dynamic style of play which produced results. As a group we like to think we achieved that already and in this season in particular.”

Lennon added: “We would have loved to play out the season in front of you, it is what we all wanted.

“We were desperate to continue the blistering form we were in when the season was suspended. However, do not in any way let this detract from our achievement. While many will seek to challenge us, the title is ours and we deserve it. We are indeed champions for a reason.”

Those sentiments were echoed by Celtic captain Scott Brown who, alongside James Forrest, has been at Celtic Park for all nine title triumphs.

“It’s incredible, to be perfectly honest,” said Brown. “We obviously wanted to play every single game but, due to the circumstances, we’ve not been able to. I think the league has done the right thing having crowned us champions because it was only a matter of time anyway.

“We do our talking on the park and we’ve shown over the last nine seasons with how consistent we’ve been. We wanted to continue that, we wanted to show how dominant we’ve been with the leagues as well.

“It’ll be amazing to get everyone back to Celtic Park, to see everyone’s faces, and to see us lift the trophy as well. We can’t wait to get back to winning ways and we need to make sure that we push and work hard as we possibly can to get 10 and I’m sure all the fans will be backing us all the way.”

While Celtic celebrate their title success, Hearts have hinted that they will seek legal advice and stressed that no club should be punished because of the pandemic.

A club statement read: “Following today's (Monday’s) decision to end the 2019/20 Premiership season and expel Heart of Midlothian Football Club from the top flight, the club would like to provide a brief update to both its fans and the wider Scottish football audience.

“We have stated from the outset that we don't believe it is right that any club should be unfairly penalised because of the Covid-19 pandemic. It was previously indicated that league reconstruction would not generate enough support to pass a vote between member clubs. In recent days a number of positive talks have been held with both the SPFL and member clubs and this topic is currently being revisited.”

However, while league officials said they have sympathy with the Edinburgh club, they insist the outcome was the fairest way they could conclude the season in extremely difficult circumstances.

SPFL chairman Murdoch MacLennan said in a statement: “Firstly, I would like to take this opportunity to officially congratulate Celtic on their achievement of winning the Ladbrokes Premiership this season, and also to sincerely commiserate with Hearts on their relegation.

“We would all have rather seen the league season played out on pitches, in stadiums and in front of supporters.

“This is not the way anybody involved with Scottish football would have wanted to conclude the league season but, given the grave and unprecedented circumstances that we are facing, the board has agreed that it is the only practical way forward.

“Covid-19 has wreaked havoc on sporting competitions around the world and the repercussions will be felt for a long time.

“Scottish Government restrictions and deep concerns for both player and spectator safety left the SPFL with no realistic option but to call the Ladbrokes Premiership now and we thank the Premiership clubs for their support on this decision.”

SPFL chief executive Neil Doncaster added: “On Friday, Ladbrokes Premiership clubs expressed their clear and unanimous view that there was no realistic prospect of completing the outstanding fixtures from Season 2019-20.

“The SPFL Board met this morning and in line with the express agreement of member clubs in April, the board determined that League Season 2019-20 and the Ladbrokes Premiership be brought to an end.

“This decision now enables us to pay out around £7million in fees to help clubs stay afloat during this incredibly difficult time. We will begin processing these payments immediately.

“The focus of all those involved in the game will now turn to how we get football up and running again safely as soon as possible.

“Nobody should be under any illusion as to how complicated and difficult a challenge it will be to return Scottish football to normality.

“We will be liaising with Government on the best way forward and working to ensure that all of our 42 clubs are playing football again as soon as humanly possible.”