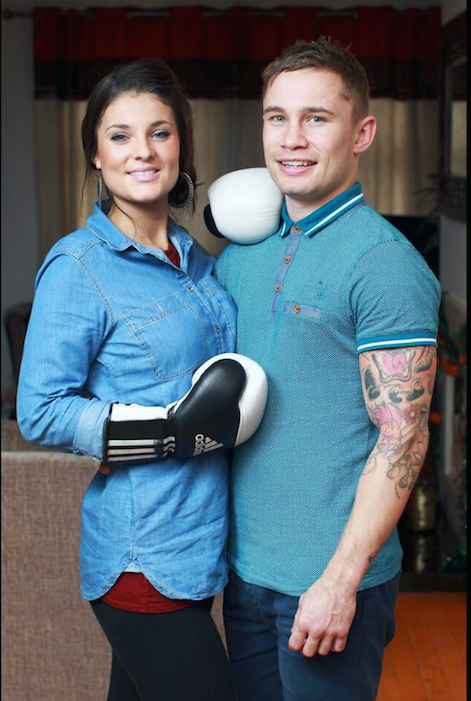 Christine Frampton with her husband Carl

AS Carl ‘The Jackal’ Frampton prepares to go head-to-head with Leo Santa Cruz on Saturday night for the WBA World Featherweight title, his West Belfast wife is making last minute plans to join her husband in New York for what promises to be an epic battle.

Former St Dominic’s pupil Christine Frampton is due to arrive in New York today, Thursday, with their children Carla (5) and Rossa (1).

Ahead of the big fight a media frenzy is already brewing in the US.

“I think the American press have been full on with Carl already,” she said. “They love the Irish over there and because of the magnitude of the fight the interest has been huge.

“I'm just so excited to see Carl and finally get some family time together. It's been almost a month now that's he's been away after a long spell in training camp in London also,” she said.

Christine, who is from Poleglass, spoke of how the couple manage being apart for extended periods of time

“It's very difficult staying behind at home while Carl is away. It's difficult for him too because he misses the kids a lot. But there are times where I can go for days without any adult company or conversation. You start to lose your marbles a bit. I've always said I applaud single parents who do it all year round. It’s not easy.

“Carla is at that age now where she fully understands everything. She does fret after Carl sometimes but she knows he has to go away to work and it's always been that way so she doesn't know any different.

“Rossa is only one so he's into everything at the minute especially climbing and smashing things including phones. I hope he doesn't follow in Carl’s footsteps. I know how difficult it is and how lonely a sport it is. I want Rossa to be a doctor or an astronaut, something good like that,” she said.

Grounded Christine remains very family orientated and is glad to have an entourage of relatives for support on the trip.

“I'm really excited to have some company in New York and will be flying with my mum (Lillian) and Carl's parents Craig and Flo. Rossa loves Carl’s daddy and I’m sure he will run up and down the plane the whole time so it’s good to have some help.

“I used to visit New York with my mum every Christmas so I’m really looking forward to returning to my favourite city with her. There’s just something magical about New York. On the first night we are staying right at the Brooklyn Bridge and then moving into Manhattan.

“My sister lives about a two hour drive from the city so she's booked into our hotel with her family to stay for the week.  We're planning on doing a few different things, all the usual touristy stuff. But I'm most excited about doing a helicopter ride over the city!”

Christine laughed at the suggestion that she will have a glamour team along with her.

“I'm not that high maintenance. My friend Stacey is coming over and she's really good at hair and make-up so I'm sure she will sort me out the night of the fight. I'm useless at things like that. I'm not sure yet what I'll be wearing. I have a couple of dresses and a trouser suit to choose from. I'll just see how I feel on the night,” she said.

The family will have a quick turnaround ahead of the weigh-in on Friday.

“It’s my mum’s 60th birthday the day after the fight so I will have to get her something special over there. Carl has also hired a bar in Manhattan and arranged informal lunch on Sunday. It’s not really a party, more a casual get-together for a few drinks and a bit of food to say thank you to the people who are travelling all that way to support Carl.”

Looking to the serious topic of life in the spotlight and being married to a boxer, Christine explains how daunting it can be for her as a wife and mother.

“I never take any of the fights in my stride.  Carl is always cool as a cucumber but I start to have sleepless nights from about a week or so beforehand. I'm a nervous wreck.

“I'm planning on bringing the kids to the arena (Barclay Centre NY) with me but get them minded out in the changing room until the fight’s over. Carl can see them immediately after. I think this is going to be a tough one, really toe-to-toe so I'm not sure the kids would enjoy watching that,” she said.

Christine said that her main concern was the safety of her husband who she met in the Kelly’s complex in Portrush ten years ago when they were both teenagers.

“In the grand scheme of things the fight to me and the kids doesn't matter. Obviously we all want Carl to win because we know how hard he’s works and how much it means to him, but as long as Carl comes through it safe and sound we're happy.” she said.