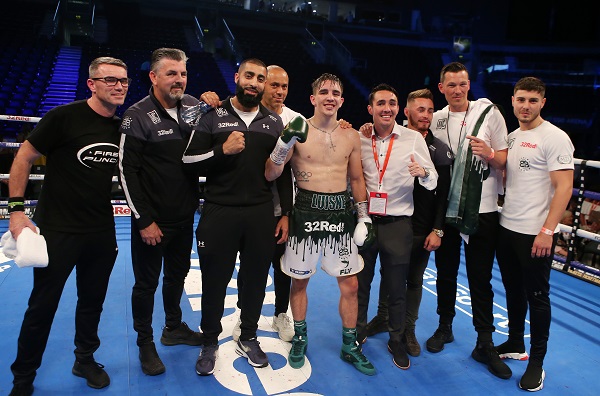 HAVING swatted Nicola Cipolletta aside in Las Vegas in seven one-sided rounds, Michael Conlan will close out a year to remember by challenging for his first pro title belt against on the undercard of Warrington-Frampton on December 22 in Manchester.

It’s a huge addition to the BT Sport PPV card – and a huge boost for Conlan. I represents the beginning of his descent to where he wishes to be – the world class level.

The West Belfast man made light work of the Italian at the Park MGM on Saturday night, closing the show in the seventh and improving his record to 9-0, paving the way for his first title fight on what will be a massive night for Belfast boxing.

He stuck meticulously to the orthodox stance, bar a few fleeting seconds in the fourth when he went lefty.

Each round appeared to be an exhibition in body shots, uppercuts, ringcraft and overhand rights with a stiff ramrod jab thrown for good measure in as he gradually broke down the unadventurous Italian.

It was an overhand right that broke Cipolletta’s dour resistance and saw a halt to the action after a performance that had trainer Adam Booth’s paw prints all over it.

While the opposition could have been better, it was still a phenomenal boxing display from Conlan who exhibited all the skills that saw him grab world gold as an amateur.

He was disciplined, economical and ultimately ruthless on the night. The display highlighted he can now drive forward and that is the plan for December 22 when he begins takes to the world title trail.

“He could have lasted a few more minutes, but I was going to get it done in that round.” he said.

“Next up is Manchester on December 22 and it will be a significant step up in class. To be honest, I wasn’t happy with the opponent tonight. I didn’t want someone who was going to be so negative.

“We want someone who’s going to try and fight me because that’s when you’ll see the best of me.

“Next time will be for some sort of a belt and I’m excited about that. I don’t care who it is – a top 15 opponent and I’ll be ready.”