Crocker intending to make his mark on the big stage 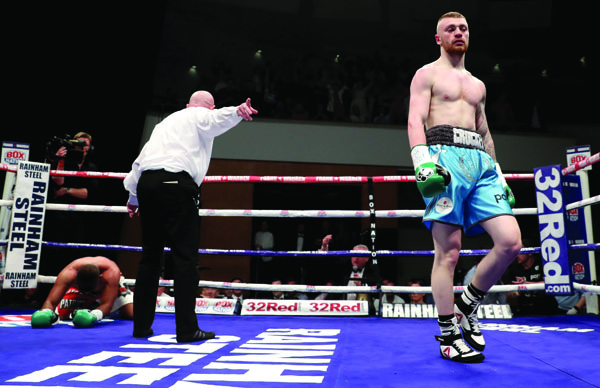 LEWIS Crocker hopes to cement his reputation as a hot prospect when he takes on Gyula Rozsas (2-1) at the SSE Arena on the undercard of a huge night of boxing at the SSE Arena on Saturday night.
‘The Croc’ has won all three of his first professional contests in devastating fashion since his debut back in March this year with his opponents yet to hear the bell for the third round and the Sandy Row man is hopeful of a similar scenario this weekend.
Not that the former Holy Trinity amateur is just a big puncher, with his skills honed boxing in the vest and while he admits it would be nice to showcase those skills, should the finish present itself this weekend, he won’t have to be asked twice.
“I’ll go in and just do what I always do and that’s to go and try to knock people out,” he insists.
“Some people have seen me spar and see that I can box and box great against top lads, so if we get the rounds in, we get the round in, but with those tiny gloves on and it lands, it’s over.”
Crocker thought the prospect of facing Sylwester Walczak was over on July 29 when his slot on the undercard of the ill-fated Carl Frampton v Andres Gutierrez fell through after the Mexican’s now famous slip in the shower the night before forced the cancellation of the whole card.
However, Crocker’s management, MTK Global saved his fight with the Pole although it took place in Birmingham instead of Belfast.
While it came as a shock to Crocker, he got on with it and recorded a first round win to improve to 3-0.
“I still got a fight last time and still got the win, but I am looking forward to fighting at the SSE Arena this time in front of all of those fans,” he confirmed.
“I was with my mates and thought the fight was over (last time). Once I got a call the next morning I was shocked and had to think about it for a few minutes, but we were on the plane an hour and a half later.
“It was the same guy (Walczak), he was on the same flight as me and we shared the same ride to the hotel and the fight together. Once I got there I was the main event as well, so if there was no pressure before, there was pressure then.
“I was with my mates the night before and enjoying myself, so it was awkward, but a good experience.”
It will be an even better experience fighting on the same card as a man like Frampton who once described Crocker as ‘one of the best kids in the country’, something that sits will with the affable South Belfast man.
There was disappointment of the July 29 card at the SSE Arena falling through, but he was only too happy to accept a slot on this one and says he is humbled by the compliments that have been coming his way.
“Even still when he (Frampton) mentions my name I get goosebumps,” he said.
“I’m still a massive fan of his, so to be fighting on one of his undercards is amazing.
“I want everyone to leave the Odyssey talking about me so I will try to make a statement. People have a lot of trust in me, so I’m just going to work hard and try to keep improving.
“Once I got the call (to box on this card) I was over the moon, as would anyone be.
“All these great fights are on the show and even if I wasn’t fighting, I’d want a ticket to go so I’m really looking forward to it.”
It has been a good start to his professional career and Crocker says he couldn’t be happier as he gets ready for his fourth outing against his Hungarian opponent this weekend.
The plan is to continue to make the adjustments, make the improvements and enjoy his apprenticeship and he says he is in no hurry to jump into title fights at the minute.
Instead, he feels he still has a lot of improving to do and with each win, his confidence will improve.
“I had my first fight in March and from then until now, my confidence has gone up,” he added.
“I hadn’t fought in a couple of years with everything so my confidence is booming and training is going great. I’m getting better and better every time.
“I’m getting fights on the big bills too, so once it’s my time to fight higher up the card I’m be ready and the nervousness will be gone.
“It’s still early in my career so I’m just going to take it all as it comes and keep getting better. All I want to do is improve and in a couple of years I will start think about titles and all of that. This is my job and I am loving it, loving life at the minute. I just want to keep doing what I’m doing.”