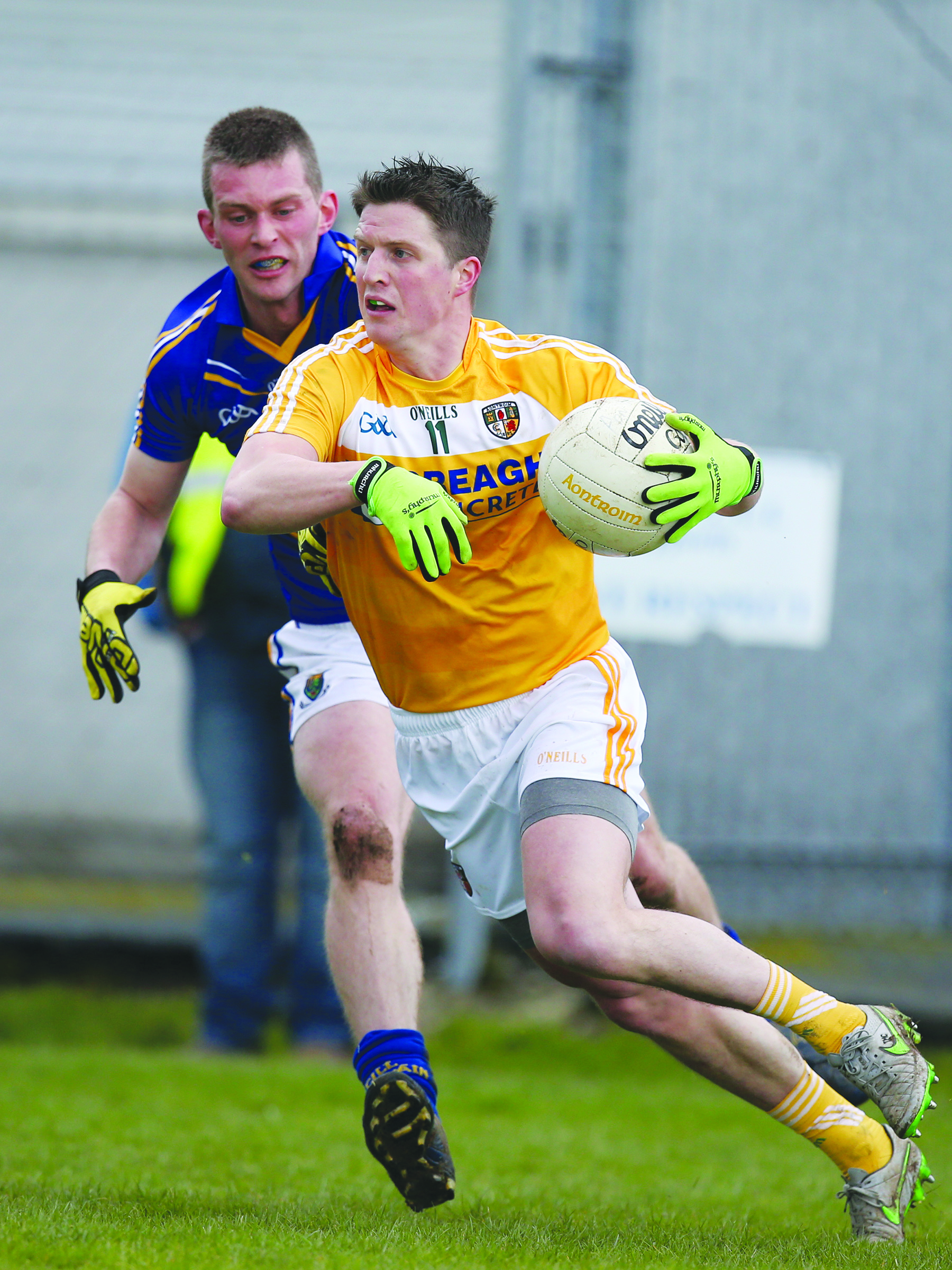 Tomas McCann in action against Wicklow last week. The Cargin ace bagged Antrim’s first goal as the Saffrons clinched promotion with a four-point win in Aughrim.

ANTRIM manager Frank Fitzsimons has indicted that he will use Sunday’s dead-rubber game against Louth in Corrigan Park to give some of the fringe players a run out. The Saffrons achieved promotion from Division Four with a four-point win over Wicklow in Aughrim last Sunday.

Their opponents also sealed promotion with a two-point victory over Wexford rendering the round seven ties this weekend rather meaningless. Antrim have picked up more than their fair share of injuries since the beginning of the year and Fitzsimons is keen to rest a few key players ahead of the Division Four final in three weeks time.

“We have a few boys injured,” said Fitzsimons. “We have 26 players there who have been knocking their pan since the start of the year. “We’ll have to give as many people as we can a run out and see if they are good enough. We know they are good enough but they haven’t been tested enough.

“There are a few who we have to rest to get them mended for Croke Park.” Captain Kevin Niblock was deemed unfit to start after shipping a heavy knock in the round five win over Waterford – although the St Gall’s ace did come off the bench in the second half against Wicklow.

Defender Justin Crozer remains sidelined with a troublesome hamstring complaint while Sean McVeigh sat out Sunday’s win in Aughrim with a shoulder injury. A number of other players are also carrying niggling injuries so wholesale changes to Antrim’s starting 15 is likely for Sunday’s clash with the Wee County.

Additionally, the sides are set to re-oppose in the Division Four final at Croke Park on Saturday, April 23 so Fitzsimons is anticipating a bit of shadow-boxing this weekend.

“Obviously it will be a bit of a chess game,” said Fitzsimons. “Louth have videos on us and we have videos on Louth so what can you do? “We will get back to the drawing board and, hopefully, we’ll get a win against Louth.”

Sunday’s game may be for little more than pride but completing the League program with a 100 per cent record is something which can only be achieved by Antrim and All-Ireland champions Dublin.

Fitzsimons hailed his players and his backroom team after the Saffrons sealed their place in Division Three for the 2017 season. Antrim’s prospects received a boost in pre-season when the likes of Michael and Tomas McCann, Kevin Niblock and Brian Neeson all made themselves available after opting out last year.

“To be honest, they (the backroom team) have been the difference,” added Fitzsimons. “The players coming back too – the guys who left last year. We also have the younger players coming through.

“The work goes on behind the scenes with Brian (Magee). He is very passionate about it. “He is on the ball with the players all the time. Our fitness is fantastic and everything is going well. “That all comes with winning and it is a great feeling.”