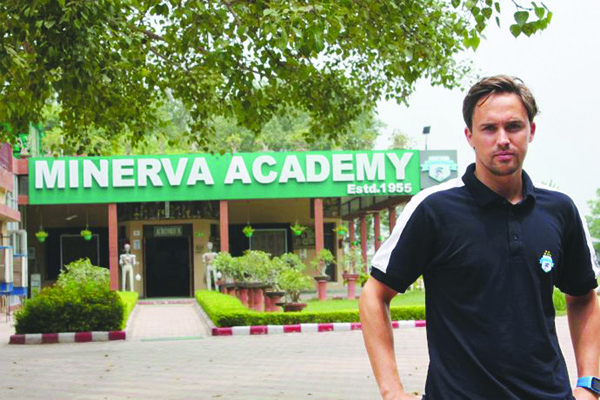 Paul Munster has taken up a role with Minerva Punjab after a successful stint with Swedish club, Orebro last season

PAUL Munster has been appointed at the Technical Director and first team coach of Indian champions Minerva Punjab FC.

The former Linfield and Cliftonville striker joins the club after guiding Örebro SK to their maiden U19 Swedish Cup success last year.

Munster had been mulling over whether or not to continue his career in Sweden. In an interview with Belfast Media Group last November, Munster hinted at remaining in European football.
However, those plans are now on the back burner for the Belfast native as he prepares to take charge of the Indian champions, who will embark on their first AFC Champions League campaign this season and Munster says he is excited by the challenge.

“I have always been going up and achieving more and more each time, even in the coaching courses,” said Munster.

“Everything has been going well and now it’s a great time for some new experience, especially in India.

“Joining a club that has been playing in the highest level, are the current champions and the fact that they are going to play in the AFC Champions League, it’s just perfect. I’m moving in the right direction.”

Munster was also well travelled as a player. Having started his career with Celtic Boys in West Belfast, he played for Cliftonville youths before moving to Canada. Munster later linked up with Slavia Prague and, on his return to Belfast, he signed for Linfield and helped the Blues secure the League and Irish Cup double in 2010 and 2011.

Moving to the north Indian club didn’t phase Munster in the slightest and he is relishing the prospect of helping Minerva Punjab FC secure more silverware in the near future.

“I was looking into Minerva Punjab a few months back, doing research on their scores and social media to see how it is and the first thing that I noticed was Mr Ranjit Bajaj, the owner is very passionate about the club,” added Munster.

“He wants the team to be the best at all levels and that is what I liked a lot.”

“For me, it’s a challenge, a new experience but I am coming here to win. As a player, I’m used to winning leagues, cups, individual awards. Coming here as a coach and working at the highest level in India and also playing in the AFC Champions League, it will be a great experience.”

In a statement posted on the club’s website, Minerva Punjab FC owner Mr Ranjit Bajaj, added: “We are excited to have Paul on board. He comes in with a lot of experience both as a player and as a coach and we believe that he can contribute a lot to this club.

“We believe that both of us together can achieve great things at this club.”