Frampton and Donaire make weight ahead of featherweight showdown 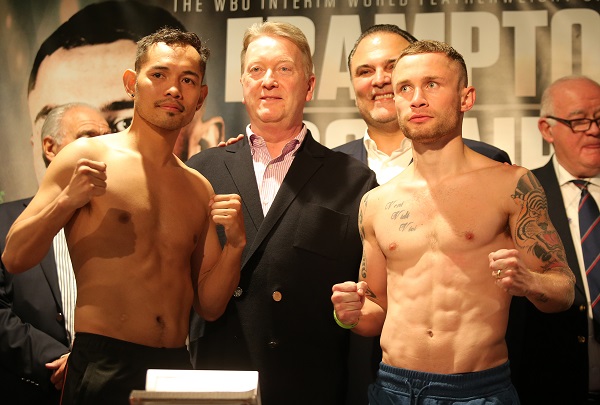 Carl Frampton and Nonito Donaire pose for the cameras as promoters, Frank Warren and Richard Schaefer look on at today's weigh-in at the Europa Hotel Picture by Jonathan Porter/PressEye

CARL Frampton and Nonito Donaire both weighed-in under the featherweight limit of 126 lbs at the Europa Hotel this afternoon, ahead of their interim WBO title fight at the SSE Arena tomorrow night.

The 'Filipino Flash' was first onto the scales and came in at 125.7lbs, with Frampton slightly less at 125.3 lbs.

This is the first time since January 2017 'The Jackal' has weighed-in less than nine stone, with last November's non-title bout against Horacio Garcia set for 128 lbs and last summer's infamous Andres Gutierrez fight that never was.

Both men looked in fantastic shape as they posed for the traditional head-to-head photos and Frampton puts his excellent conditioning down to a meticulous training camp spent between Manchester and Tenerife.

"It's (making weight) been ok because of the approach I have taken," he said.

"I have a nutritionist on board for the first time ever. It has always been done by myself and my previous team.

"We have had a good nutritionist, a good S&C (strength and conditioning) coach and I haven't been afraid of the scales like I have in the past. I would look in the mirror and tell myself what weight I think I am rather than get on the scales so I've done it right.

"It's never too late to make changes and I think they are all for the better. It's never easy to make weight, but this time it's been easier."

Donaire has won over the Belfast fans with his genuine and friendly approach throughout, but there was a noticeable shift in his demeanor on the scales as he switches into fight mode.

The 35 year-old four-weight champion is being written off in some quarters, but not by the North Belfast man who knows he has a huge task ahead of him.

Still, Donaire is happy to play the underdog although he is certain of victory and another shot at world honours.

"His trainer (Jamie Moore) was saying that I was a world champion when Carl was still an amateur, but I fell great and that's something that has always been with me - that personality that I have," said Donaire who has been blown away by the reception he has received in the city.

"You have Carl who is up (there) in this division and he still has that ability to fight anybody else. For me, everyone is writing me off as the old man."

Tomorrow's meeting between the pair has all the ingredients to be a classic between former World Fighter's of the Year.

One slip could be costly for either man, so expect the pair to be on point from the opening bell and most likely, through 12 rounds.

The magnitude of the occasion and opponent is not lost on Frampton who wants to score another famous win that will enhance his legacy further.

"This is the one in 30 years time, people will still be talking about it and say 'I was there the night you fought and beat Nonito Donaire'," he predicts.

"It's going to be a proud moment for me on Saturday night and I fully believe everything has come together for me at the right time."