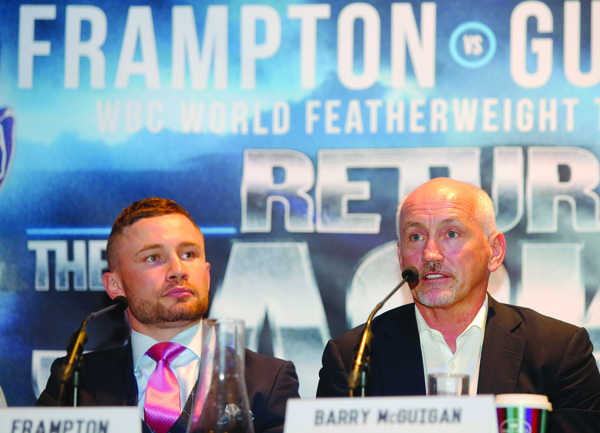 BARRY McGuigan believes Andres Gutierrez is the ideal opponent for Carl Frampton ahead of Saturday’s WBC featherweight eliminator at the SSE Arena.

Having fought Leo Santa Cruz twice in-a-row, McGuigan felt Frampton could use the change in opponent and while their first choice was to secure a third meeting with ‘El Terremoto’ in order to win back the WBA title, a different Mexican opponent for Frampton’s homecoming after two and a half years on the road could be just what the doctor ordered according to his manager.

“It was frustrating when it was quite obvious Santa Cruz didn’t want to fight him next,” said McGuigan of the challenge of finding a suitable dance partner for ‘The Jackal’.

“I’m not saying he didn’t want to fight him again, just not next. He obviously had trouble with the (Abner) Mares fight too because that has been on and off, on and off. It was on in July, now it’s September so when both fighters are on the money they’re used to, it’s difficult to get fights that satisfy everybody because you’ve got to pay the money, get the television on board to make it financially viable and find the venue, so it’s a very difficult situation.

“I think in many ways this is a better situation for Carl. He needed a change of opponent because three fights against the same guy with the same style can get you into a groove. He needs to get out of that groove, sharpen up in other areas and be able to set himself for a different fighter.

“Santa Cruz (in the rematch) didn’t fight in the same marauding style this guy does, but he (Gutierrez) isn’t as technically good as Santa Cruz so we have to change and alter our tactics. I think Carl will look great against this guy.”

The third meeting with Santa Cruz is still likely to happen should both come through their next fights, but back in the United States most likely although it will almost certainly not be happening this year given Santa Cruz’s rematch with Mares takes place in October.

That could bring either IBF champion, Lee Selby of WBC holder, Gary Russell Jnr into play and McGuigan says he is unconcerned who the other man is so long as his fighter gets his chance to become world champion again.

“I believe he is a future Hall of Fame fighter and needs to get those big fights, but we also understand we need to get his sharpness back and put on a performance in what is a semi-final fight.

“It’s in these ‘semi-finals’ where you can get caught out so he needs to be switched on and he will be on the night. I think this could be the best fight of his career.”

While Andres Gutierrez is somewhat unheralded, the 24 year-old Mexican will travel to Belfast confident of causing an upset and putting himself in the world title mix.

‘Jaguarcito’ has a come-forward, aggressive style that Frampton loves to face so the styles ought to mesh well on the night and McGuigan believes is the perfect foil for his man.

“It’s very much a good opponent for him and a fight he needs to be focussed on, needs to get motivated for,” he insists.

“I think the fans are going to have a great fight.

“This kid has a great chin so it’s going to be a sensational fight and I think we are going to see Carl at his best. That will enliven him again and rev him up again. Then we won’t give him much time before we hopefully organise a world title fight before the end of the year.”

Coming off a loss can always be difficult, especially the first of your career so for Frampton, it will be about producing a top performance and scoring an impressive win to restore confidence.

McGuigan knows what this takes and believes Frampton has the mental wherewithal to come back better than ever, but can’t be looking past Gutierrez or else that third meeting with Santa Cruz could disappear: “You saw what happened with Santa Cruz, he bounced back and was more alert, better tactically the second time. Carl has got to show he can do the same.

“I know Carl will be sharper, better and more focussed in the next fight with Santa Cruz, but we have to do this on July 29 (first). He has been in the gym a long time and is looking very good.

“We’ve been using heavy guys in sparring because this guy is strong, marauding and attacking. We are preparing for a long, hard night’s work.”