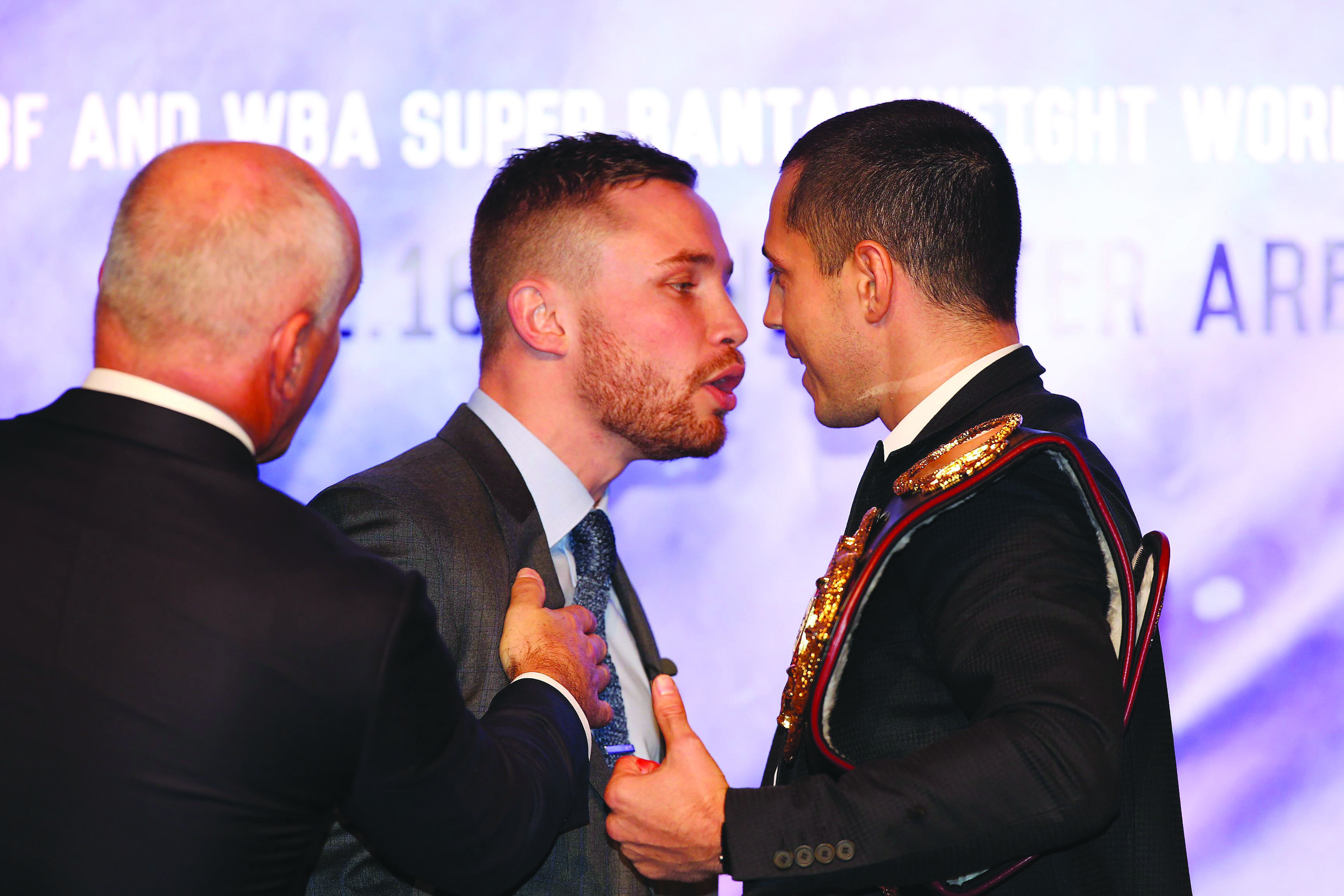 Pantomime season was in full swing at the Europa Hotel yesterday as Carl Frampton and Scott Quigg concluded their three-day press tour ahead of their unification fight in Manchester on February 27.

The Grand Ballroom in the hotel was packed to capacity long before Eddie Hearn entered with Scott Quigg and trainer Joe Gallagher in tow.

Chants of “who are ya” rang out but the Bury fighter seemed to take it all in his stride as he pointed to his WBA belt.

It didn’t take long to establish who the real villain was, though, as Hearn could barely get a word in without someone heckling the Matchroom boss.

Indeed, Sky’s Adam Smith, who was MC for the event, struggled to keep order at times.

Frampton, who entered to a hero’s welcome, taunted his rival by holding up a sign which read “real champion” – and he vowed to end Quigg’s unbeaten record.

“We’ll taker over Manchester on February 27,” said Frampton. “I am a better fighter. It doesn’t matter how I win.

“If it is on points, it will be shut-out. If it is a stoppage, it will spectacular.”

Quigg, who didn’t appear to be fazed by Frampton’s the noisy Frampton support, countered: “They can’t get into the ring. It is just going to be me and him.

“I am better in every department and I will knock him out.”

But the most stinging verbal punch was thrown by the former world champion Barry McGuigan.

In a heated exchanged with Hearn, the Cyclone Promotions chief rejected the notion that he was ‘let into’ the deal by Hearn and Sky and told Hearn: “Carl doesn’t work for you – you work for Carl” adding: “Don’t be so smug mate – you’re an a*****e.”

Clearly there is no love lost between the pair but the Clones native then revealed his reasoning for agreeing a deal with Hearn.

“There comes a time in a guy’s career when these fights have to be made,” said McGuigan. “If we had done it two years ago, it wouldn’t have been big enough. If we waited another two years, it would be too late for one of the fighters.

“It is the right time. We have built it up.

“We have negotiated and we have done a good job – the guys are going to be earning a lot of money and it is a great fight.

“We are confident we are going to win – Carl is going to knock this kid out.”

Hearn was then pressed to state his case for his man on the back of his claim in 2013 that he felt Frampton would be too strong for Quigg.

“Carl Frampton is one of the biggest stars in world boxing,” he said.

“This is a huge fight. Tickets go on sale at 9am on Friday morning and I don’t think there will be too many by 10am. This is the kind of fight that we are in the business for. It is a privilege to be a part of it. People will be watching from all around the world.”

He continued: “I have learned a lot of Scott Quigg in the last two years. I think July 18 showed us a lot about the two fighters.

“Scott Quigg’s demolition of Kiko Martinez was very impressive while Carl Frampton’s victory wasn’t. I think everyone agrees with that. Take nothing away from Carl, it isn’t a given but I believe that Scott Quigg is going to win comfortably, I really do.”

Tickets for the bout, which is expected to be broadcast exclusively live on Sky Sports Box Office, will go on sale on Friday at 9am from Ticketmaster, the Manchester Arena, Cyclone Promotions and Matchroom Boxing.

Tickets with the IBF and WBA World super-bantamweight title clash between Frampton and Quigg go on sale on Friday (November 20) at 9am, priced from £40 plus booking fee.

Frampton fans are urged to visit ‪http://manchester-arena.com where the biggest allocation will be for the ‘Jackal Army’.

It is anticipated that all the tickets will be snapped up in hours, if not minutes – especially if this final leg of the press tour is anything to go by.

Frampton successfully defended his title against Alejandro Gonzalez Jnr with a unanimous points decision in El Paso, Texas, but the Mexican put Frampton down twice in a nightmare opening round for the Belfast fighter back in July.

Frampton recovered well to outbox his opponent for the remainder of the contest with Gonzalez losing a point in the 11th after a low blow.

On that same night, Quigg impressively stopped Kiko Martinez inside two rounds in the Manchester Arena.

Prior to Quigg taking on Frampton’s former foe, Eddie Hearn had made an offer of £1.5 million for the Belfast fighter to take on Quigg.

The offer was dismissed as a stunt by Barry McGuigan but Quigg’s impressive dismissal of ‘La Sensación’ further fueled the public’s desire to see a fight between the pair being made.

Indeed, February’s bout is one of the most eagerly-anticipated fights of 2016.

Quigg, who is unbeaten in 31 professional fights, with 21 knock-outs, will be the underdog for the fight, despite having home-town advantage.

Frampton is best-priced 8/13 while Quigg is the 7/4 outsider of the pair.

It is expected that several local fighters will be included on the bill and Hearn has previously stated his desire to have an ‘Ireland versus England’ theme throughout the undercard.