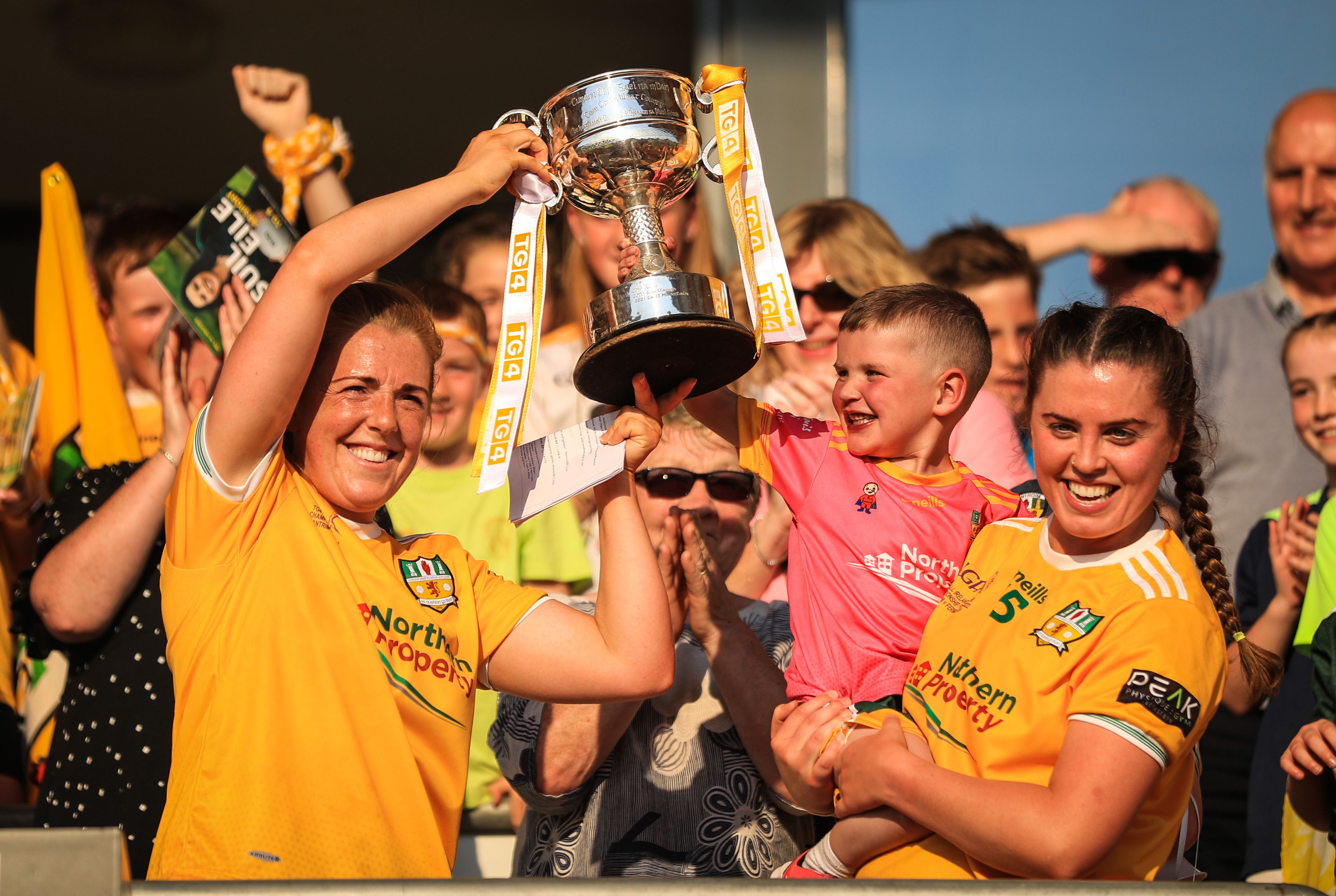 ANTRIM ended a 10-year wait for the LGFA All-Ireland Junior title as they powered to victory over Fermanagh in Saturday's replay at Armagh's Athletic Grounds.

Two weeks after the draw in Croke Park when the Saffrons were extremely wasteful, this time they were much more efficient in front of the posts and were helped in their cause by early goals from Lara Dahunsi and a Cathy Carey penalty.

Grainne McLaughlin played a starring role for the victors, turning up the heat on a blistering hot day and top-scoring with eight points - five from play.

It was left to Eimear Smyth to carry the fight for Fermanagh and she kicked seven of her own, but unlike McLaughlin, had little support with Antrim just better in all departments on the day.

"The team performance there was all-round - nobody had to lift it and drive as they all stepped up to the plate," said a delighted Antrim manager, Emma Kelly who was a player when Antrim last won the title in 2012.

"The first goal was a deflection or a slip but made our girls think the luck might be on our side and we could kick on.

"I threatened to take Grainne McLaughlin off at half time and said I was giving her two minutes (to improve ) and it was the kick up the arse she needed as she started to play.

"If one person went quiet the other stepped up so it was a good team performance - pity we couldn't get more subs."

🗣 "It was about keeping our heads and going for it"

After an early exchange of pointed frees for Smyth and Grainne McLaughlin, Antrim bagged their first goal and Dahunsi - so influential in the drawn game - forced a turnover out on the right and while she shot for a point, it dipped over Róisín Gleeson wickedly and ended up in the net.

Smyth replied with a point, but Antrim's second goal arrived a minute later when Maria O'Neill was sent through and while Gleeson saved the shot and injured herself in the process, after a stop for treatment, referee Lorraine O'Sullivan indicated there was an infringement in the build-up and awarded a penalty.

Up-stepped Cathy Carey who produced a composed finish, high down the middle. Again, Smyth replied with a point but Orlaith Prenter cancelled this out from a free.

Smyth was on fire for the Ernesiders and hit a great score, attacking at pace and shooting on thw spin, while she finally got some help in the attack with Erin Tierney lashing over off her left.

Yet Antrim had a fine spell, with points from Caitlín Taggart, McLaughlin and Bronagh Devlin to put the gap out to six.

The wides began to creep in towards the end of the first half and Smyth's fifth of the game kept Fermangh in the hunt at the break with Antrim's lead 2-5 to 0-6.

Smyth had an opportunity to narrow the gap further at the beginning of the second half, but her free came back down off the post as Antrim's first foray resulted in McLaughlin steering a shot over.

The saffrons kicked on with Taggart, Carey and McLaughlin pointing before Smyth finally added to the Fermangh tally from a free on 43 minutes.
Caitín Taggart replied immediately to leave Antrim 2-10 to 0-7 up by the well-needed water break.

Bláithín Bogue, so influential for Fermangh in the drawn game, was held scoreless until the 47th minute when guiding a shot over with the outside off her boot, but this failed to ignite the Ernesiders as Antrim drove to the line with McLaughlin the star of this show, weaving onto her left for two from play and another off a free.

The coup de grace came on 53 minutes as Carey fielded a long ball and buried to the net, pushing the lead out to an unassailable 15 and while Fermanagh did stick to the task with points from the Bogues - Cadhla and Bláithín - and Smyth in reply to McLaughlin's eight of the day, Antrim were home and hosed with the West County Hotel Cup firmly in hand.

"Division Four will be our target now," added Kelly.

"Girls are looking breaks but trials start in November and that's it . We have good minors stepping out now and they will be looking to push on to senior so next year's squad could be completely different.

"That's a good thing as it pushes the rest and makes the whole team better."