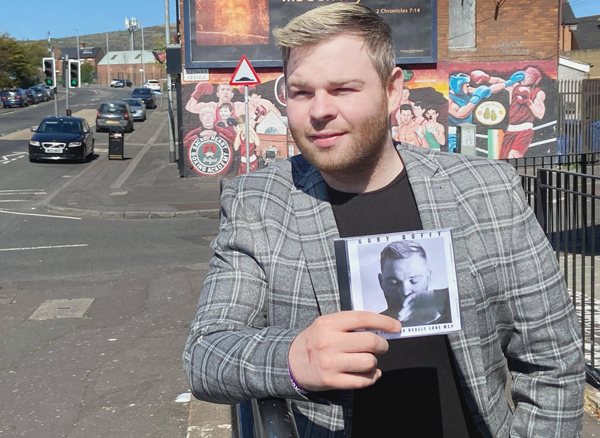 A NORTH Belfast singer is setting his sights on a solo music career after recently launching his first single.
Gary Duffy (28) from the Oldpark is perhaps better known for his work as drag queen, ‘Sasha Fierce’ in the LGBT scene in Belfast.
However, Gary has turned his attention to writing and producing his own music; something he has always had a keen interest in.
“When I was very young, I used to go to drama groups. I have always been into drama and theatre. I then got into drag and I work for the Kremlin,” he explained.
“Drag is really a bit of craic. You are a female impersonator up on stage performing. Singing is a big part of it. I won local LBGT entertainer of year in 2018.
“My confidence with my singing really improved. Over the last two years, I have been doing pubs and clubs and private gigs.
“In the last six months, I decided to do my own music and I started writing.
“The first song is out now and I am already working on my second song now. It is all very exciting.”
His first single, entitled ‘Did You Really Love Me?’ takes the form of a smooth heartfelt pop ballad.
“I broke up recently with my partner of three years which was very tough. My first song is obviously related to that but I will be doing some upbeat stuff as well.
“Currently heartbreak is inspiring me to make music along with moving on with life.
“I feel like it’s those life experiences that help me to make great and truthful songs.
“The next song I am working on is very summery and just makes me want to go to Ibiza and party.
“The reaction to the song has been great. People have called me an inspiration and they can relate to it.”
As well as releasing his first single and having started work on his next song, Gary has also been busy in isolation during the Covid-19 crisis by keeping neighbours in his Oldpark street entertained.
“I did a live show out in the garden the other Saturday night. The whole street was out and they loved it.
“It brought a bit of happiness and craic to the street in these tough times. All the neighbours keep asking me when I am going to do another one, so watch this space!”
As for the future, there is only one thing on Gary’s mind – music.
“I work for a bank full-time but I want to do music for a living. The future for me is music. I want to write more music.”
Gary hopes to have an official launch for his first single after the Covid-19 restrictions lift in Union Street Bar. Keep an eye out on his social media for a date announcement.
‘Did You Really Love Me?’ by Gary Duffy is available to download now on Spotify, Apple Music, iTunes, Amazon Music and YouTube.