Geraldine’s drama pulls in the viewers 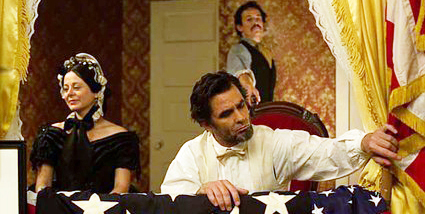 West Belfast actress Geraldine Hughes is celebrating this week after her latest role – playing the wife of assassinated US President Abraham Lincoln – went down a storm with viewers.

Killing Lincoln, which was screened at the weekend, is officially the most watched programme in the history of the popular National Geographic Channel.

Former St Louise’s girl Geraldine is no stranger to  fame, having already starred in the boxing blockbuster Rocky Balboa, playing alongside Sly Stallone in 2006, as well as featuring in Gran Torino with Clint Eastwood in 2008.

Narrated by Hollywood A-lister Tom Hanks and starring The Killing’s Billy Campbell as Lincoln, Killing Lincoln has been a high-profile project since its inception. The two-hour TV  drama, screened in the US at the weekend, is based on a book co-authored by the Irish-American cable TV talk show giant Bill O’Reilly, and focuses on one of the most infamous presidential assassinations in history – the shooting to death of Abraham Lincoln in 1865. The premiere averaged 3.4 million people, a record for subscription-only channel NatGeo. The drama also stars Jesse Johnson in the role of killer John Wilkes Booth.

Killing Lincoln was produced by Hollywood director/producer superstar brothers Tony and Ridley Scott’s Scott Free Productions. It was one of the projects that Tony was working on when he tragically took his own life in Los Angeles last August.

NatGeo CEO David Lyle attributes the success of the drama to viewers being “hungry for entertaining, culturally relevant programming”.

Delighted with the popular success of the show, Divis girl Geraldine said: “Our film goes inside the assassination.  I was shaking after I saw it. It’s very, very, very emotional and an incredible accomplishment on everyone’s part.

“We shot it in 15 days.  It’s really extraordinary.  And as an Irish person playing Mary Todd Lincoln, I was like, ‘I can’t believe it!’ I’m just so grateful that that always will exist.”