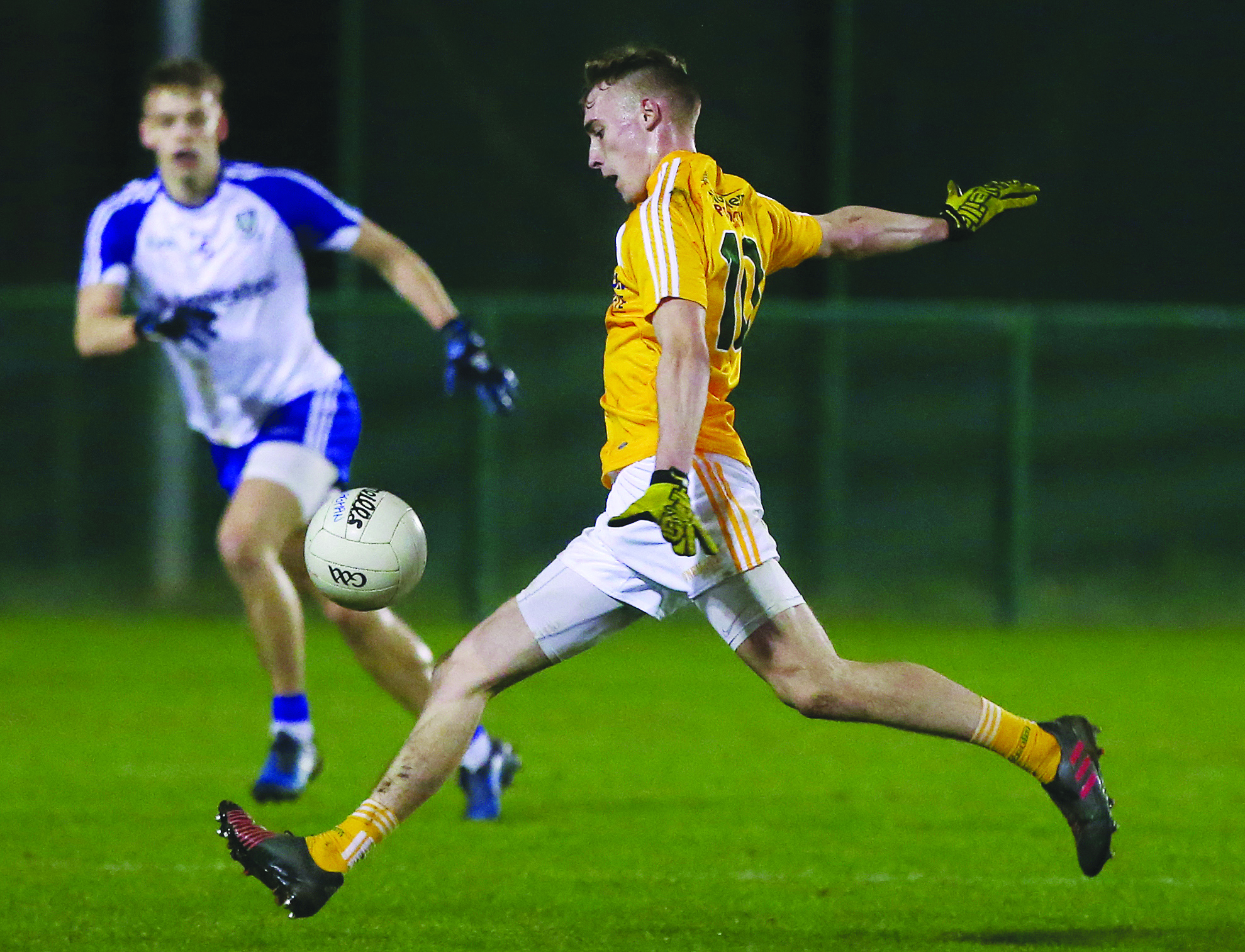 ANTRIM bowed out of the Ulster U21 Football Championship at the Queen’s Arena last night, but not without a fight as defending champions, Monaghan were pushed all the way in this preliminary round clash.

The teams were level on nine occasions and the visitors led by just two with five minutes to play, but the Saffrons seemed to tire in the closing stages with Monaghan kicking the insurance scores to seal a quarter-final berth.

There was no doubting the stand-out on the night, with Antrim’s Seamus McGarry in inspired form, the Aldergrove man kicking eight excellent points, six of them from play but it was not enough as Monaghan goals in either half proved decisive.

The game was played at a great pace throughout and both sides were intent on attacking from the off although both kicked early wides.

The first point of the night arrived on five minutes with Odhran Eastwood kicking a free for Antrim, but Monaghan hit back with scores from David Garland and Michael Bannigan.

McGarry then introduced himself on 10 minutes, selling a brilliant dummy on the right before curing over with his left and four minutes later, nudged Antrim ahead when taking a pass from the advancing Patrick McCormick and curling over, this time from out on the left.

Antrim’s lead was not to last however as a minute later, a stray pass broke down into the path of Dermot Gleeson who rifled the ball low into the net to make it 1-2 to 0-3. The Saffrons responded brilliantly however with McGarry curling over his third of the evening and while this point was cancelled out by a Garland point from an angle on the right, Antrim were in the ascendency and they drew level with points from defenders, Peter Healy and Patrick McCormick before that man McGarry curled over his fourth, this time from a tight angle to move the hosts ahead.

They were dealt a blow on 30 minutes however, when centre back, James Mealiff was issued a black card for a foot trip on Peter Healy with Eastwood kicking the resultant free to tie the game at 1-6 to 0-9 at the half, but Antrim really should have grabbed a goal before the short whistle when a quick interchange of passes saw Eastwood square for McGarry who rose to palm the ball home, but somehow Monaghan goalkeeper Shane Garland made a stunning stop to divert the ball out for a 45.

The second half picked up where the first left off with Eastwood kicking two frees in response to scores from Bannigan and substitute, Mickey Tierney.

Antrim edged back ahead on 40 minutes when another lightning break from corner back, Pat Brannigan saw him lay-off to Ruairi McCann who dissected the posts from out on the right, but again Monaghan left the game level with Bannigan kicking a long-range score.

Ruairi Scott then nudged Antrim back in front again on 44 minutes, but from their next attack, Monaghan broke forward at pace with the ball finding its way to Bannigan who in turn fed Garland and the corner forward swivelled and buried the ball low into the corner of the net to make it 2-9 to 0-13 with a quarter of the game remaining.

To their credit, Antrim tried to stick to the task with McGarry once again on target, this time with a quite magnificent effort off his left from close to the left sideline, but they were beginning to feel the pace as Monaghan started to make more headway in attack.

Barry Kerr kicked two in a row for the defending champions to arrest a number of wides kicked by the Farneymen and while McGarry hit his seventh of the night to keep Antrim in the hunt, they shipped two points in quick succession with Garland pointing and then from the resultant kick-out, the ball went straight to Stephen Finnegan who gleefully split the posts to make it a four-point game.

A McGarry free did reduce the deficit down to a goal with the game moving into injury-time, but the issue was put beyond doubt when David McAllister curled over deep into stoppage time to secure a four-point win for Monaghan that did seem a tad harsh on Antrim after a hugely enjoyable Championship clash.