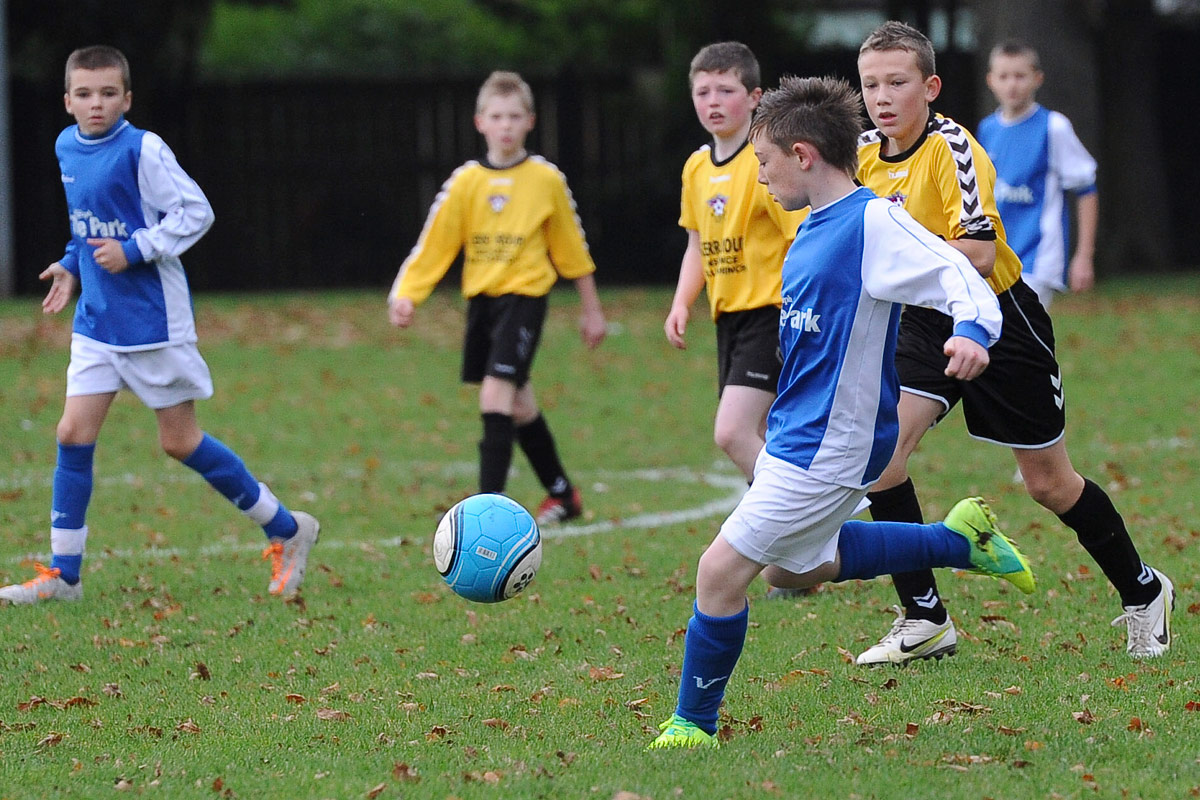 Both the Mac junior teams came up against Ardoyne opposition in the Mini Soccer League at Grosvenor on Saturday, emerging victorious in one match but coming up short in the other.

Game one saw Ardoyne take control from the start and they raced into the lead after five minutes.

The Falls club knew they were up against a good side and they rolled their socks up with Karl Reilly, Ciaran McKernan, Gerard Kennedy and David O’Hara central to their efforts.

On ten minutes Brendan Quinn freed Anthony Quinn on the left and he reached the ball before pulling it back for Brian Marley to smash it into the net.

This energised the Mac boys but they were quickly brought down to earth when their opponents grabbed a couple of goals to wrap up the contest.

Following this the Mac A lined up against John Paul and put in a performance full of energy and skill.

Ryan McKeown has developed a great knack of scoring headed goals recently and he kept this up by twice getting on the end of great deliveries from corners by James Boyle.

These, not surprisingly put the West Belfast side in control of the match and they proceeded through Cein Dynes, Cein Lidster and Ryan McKeown to turn the screw.

John Paul, however, had not read the script and early in the second half they reduced the lead when the ball flew past Padraig McKernan after deflecting off a defender.

Good teams react well to adversity and the Mac responded to this setback immediately when Gary Kearney passed to Sonny Crilly and he fired home to once again extend his team’s lead.

Well done the Mac and well done both Ardoyne clubs for their sporting and positive contributions.

Also at the Grosvenor on Saturday the Mac U16 team entertained Ards Youth in the South Belfast League and after a close enough first period the Loney lads ran out worthy winners in the end.

Ryan Hanna had twice got on the score-sheet in the opening 20 minutes but the North Down side replied with two goals of their own to leave the contest level at the break.

The Mac came out for the second half determined to stamp their authority on the match with David McAllister and Jonathan Sterrit dominating proceedings.

‘Pickle’ hit a great shot which struck the bar before David McAllister was first to react to a loose ball in the box, hammering it home past a line of defenders.

From here on in it was one-way traffic and after Ards conceded an unfortunate own goal the Mac emphasised their superiority with further strikes from Padraig Hyland and that man Sterrit.

Over at the Danny Blanchflower Stadium, Immaculata also put in an impressive display to overwhelm Crumlin United in the South Belfast League.

The Falls lads never looked back once Darren O’Neill hit a superb goal from the half way line and several minutes later they went further ahead with a double courtesy of Pearse McNeill.

Things continued in much the same vein after the interval and a great 20-yard strike from Richard Quinn, added to a Caoimhin Masterson effort, clearly emphasised Immaculata’s dominance.

Credit to Crumlin for their refusal to throw in the towel and with several minutes left they deservedly gained a consolation goal.

Over at Cherryvale the Mac U13 team lined up against Ballynahinch and although they played well during the opening half they were still trailing by a single goal as the match resumed after the break.

Things didn’t take long to change, however, as the Loney club, with Pierce Arterton especially dictating the whole shape of the game, got back on level terms through a brilliant Caoimhin Black overhead kick.

Not long after the same player justified his man of the match performance with another fine goal, which in the end ultimately decided the contest.

The County Down side pushed on in search of an equaliser but they found the Mac defence, personified by the determination of Daniel McManus, just too difficult to break down.

Immaculata themselves were not finished yet and five minutes after coming on Michael Owen was on hand to score the decisive third goal which guaranteed maximum points for the boys from the Falls.