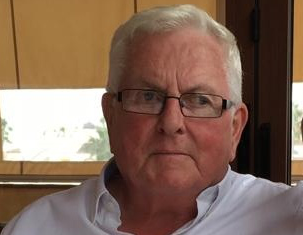 Tom McCartney (71), who passed away at home in Dunmurry on Friday 17 April after a nine-month battle with cancer, was well-known as the driving force, with brother Joe, of the McCartney plumbing business in West Belfast.

At one time the business, founded by Tom’s father Thomas P McCartney, had 60 West Belfast plumbers on its books. Tom’s expertise in pricing and managing jobs across the city earned the firm a stellar reputation.

Tom was the oldest of 12 McCartney children born to Tommy and Mary McCartney and was brought up in the Clonard area and then in Fruithill, Andersonstown.

In the McCartney family tradition, he played for St Gall’s GAC and later served as a committee man at the Milltown club.

On his retirement, he moved to Spain with wife Valerie but returned to Belfast often. As his illness worsened last year, he moved back to Belfast permanently.

Tom’s sister Therese says he was devoted to his six children. “He loved a sing-song and his golf and remained deeply committed to the community. He was proud of the fact that he would often bump into plumbers who would say, ‘your firm gave us a start when no-one would’.”

In line with the coronavirus lockdown regulations, there was no wake or funeral service for the deceased. “It makes it very hard for the family,” said Therese. “It is the most awful of times.”

Monica Culbert, Chairwoman of St Gall’s GAC, paid tribute to Tom McCartney’s contribution to the club. “The McCartney family were stalwarts of St Gall’s,” she said. “As a player in the sixties and seventies and later as treasurer of the club, Tom was an outstanding ambassador for St Gall’s and our sympathies at this time are with his family and friends.”

Tom McCartney is survived by his wife Valerie and their daughter Caitlin and by his children from his first marriage to the late Geraldine Brown: Christeena, Sarah Jane, Shauna, Geraldine and Vincent.

His surviving siblings are Bríd, Máire, Clare, Joseph, Edmund, Stephen, Katherine, Patricia, John and Therese. He is predeceased by his sister Frances.

Tom McCartney’s remains were brought from Healy’s Funeral Home in Anderonstown to Roselawn on Tuesday morning, 21 April, for cremation.