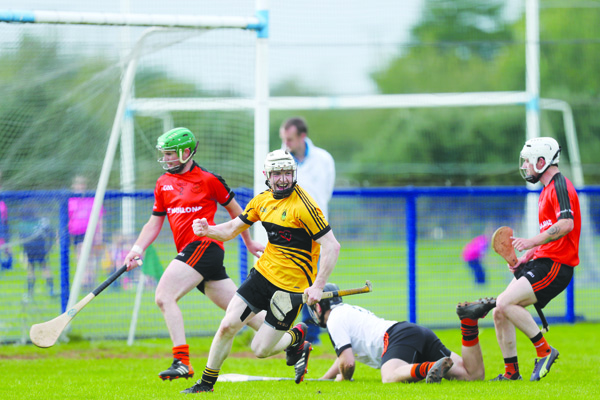 St Enda’s forward Eoin Conlon wheels away after scoring a goal during last year’s Antrim Intermediate Hurling final defeat to Cloughmills. The Glengormley side begin their 2017 Championship campaign against Armoy in Randalstown on Sunday

LAST year’s beaten finalists, St Enda’s, begin their quest to go one better when they take on Glen Rovers, Armoy in the Intermediate Hurling Championship preliminary round tie at Randalstown.

The Glengormley side enjoyed a memorable run in the 2016 Championship when they upset the odds to reach the county final. They had far too much scoring power for St Paul’s in their opening round, winning 0-22 to 1-10.

However, they were underdogs when they were pitted against a Glenariffe side who were one of the leading fancies at the beginning of the season. After a grueling extra-time battle in Cushendall, St Enda’s emerged with a 1-29 to 4-18 win. Despite the heroics of Paul Mullan’s side, few gave them a chance against Cloughmills in the Championship decider. Yet again, St Enda’s delivered a huge performance when they needed it most, but they just fell short in their efforts to win the Intermediate title as the North Antrim men claimed a 2-17 to 1-16 win in Armoy.

That Cloughmills went on to defeat Carrickmore, Keady and Eoghan Rua of Coleraine to win the Ulster Intermediate title underlined the class of the 2016 Antrim champions. Mullan feels last year’s experience will stand to his side as they begin their 2017 Championship campaign this weekend.

“It has given us the hunger to go at it again, that’s for sure,” said Mullan. “In terms of form last year, the way Cloughmills were playing and the way we were playing, the best two teams were in the final.

“We can take great heart from that and we can take great heart from the fact that we were able to raise our game to that level. “We were disappointed that we stumbled at the last hurdle. “If you had five or 10 minutes to play it over again, we would make a few different decisions and maybe gotten something out of it. That’s the way to goes. “It has certainly given us a hunger to back that performance up and to show a similar level of performance.

“Preparations have gone as well as they could do. We have no major injury worries. “We know what we have to do and we know what the challenge ahead of us is. “We have played against Armoy, both last year and a few years ago. Both teams know each other well. “We had a right run in the Championship last year so we know what it takes to survive in it. Whether we bring that on Sunday or not, time will tell.”

Mullan has pinpointed one area where he feels his side must improve if they are to make an impact in this year’s Intermediate Championship. The St Enda’s boss said his side lacked a ruthless streak in front of the posts when it really mattered – a view underlined by the fact that they hit 13 wides in the county final against Cloughmills. “Certainly, we can improve. We need to maximise our opportunities,” said Mullan.

“We were very wasteful at times last year. “We were too eager to take silly options and we need to be more considered in getting a return on the possession we have. In all the games, we were very hard-working and we won a lot of possession, but we turned over a lot of ball. The final product just wasn’t up to standard at times and that went against us. “We have been mindful of that this year in terms of taking the right option.”

While St Enda’s beat St Paul’s and Glenariffe before holding their own against Cloughmills, Mullan believes the Glengormley men have a harder draw this time around. As well as having to play in the preliminary round, St Enda’s face a team from Division Two with the winners playing last year’s Antrim and Ulster Junior champions, Lámh Dhearg next weekend.

Should the North Belfast side come through those two clashes, they would face either Sarsfield’s or St Gall’s in the semi-final. St Enda’s are well-placed to claim a berth in Division Three when the league is restructured, once again, next season. Armoy find themselves second from bottom in Division Two, but they claimed a good win over St Gall’s earlier this month.

“It is a tougher draw this time,” conceded the St Enda’s boss. “We were fairly confident that we would be getting a second game last year. “We played St Paul’s twice in the league and we knew in our hearts we could beat them and get another round. “It is a different story with Armoy.

“They are a seasoned team and they will be disappointed with their performance in the Championship last year. “They were carrying good form into the Championship – they beat us handy enough in the league beforehand. “We got a kinder draw and we grew into it. “Armoy are a big, physical team. They have struggled a bit in Division Two this year, but I think they haven’t had all their players available. They have all their boys back now and they’re a tough unit to break down.”

While Armoy will be regarded as favourites for Sunday’s Intermediate Championship opener, St Enda’s will not fear their North Antrim opponents. The majority of last year’s squad remain and they will be keen to give another good account of themselves. They showed great character to defeat a highly-rated Glenariffe side in last year’s Intermediate Championship semi-final after extra-time.

The winning and losing of the game could be down to the anticipated battle between Antrim colleagues Joe Maskey and John Dillon. The versatile Maskey is often named in the full-forward line, but tends to drift deeper. If Dillon is forced to track his runs, it could create space for Eoin Conlon and Cormac Jennings to thrive. If the Glengormley men rediscover their Championship form from last year, they could be in for another long summer campaign.