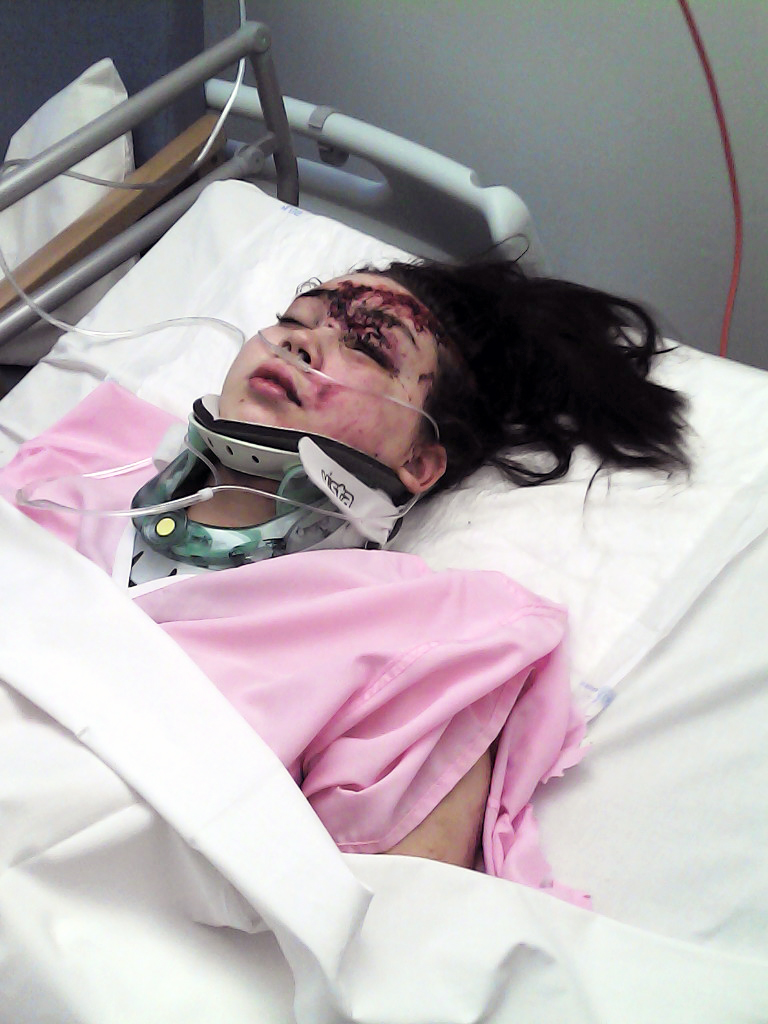 A SIXTEEN-year-old West Belfast girl left fighting for her life after she was seriously injured when the car she was travelling in crashed on the Upper Springfield Road faces three more surgeries.

Shannon Adams, a Year 12 student at St Genevieve’s High School, was a rear seat passenger in the vehicle which crashed last Wednesday evening, causing her head to go through the side window of the vehicle. She was then dragged along by the vehicle with her head still on the ground.

One week on and Shannon has extensive damage to the left side of her head, her left arm, her eye and her thumb.

Speaking to the Andersonstown News this week, her distraught mother Joanne said: “I can’t believe this has happened to Shannon, you should see her face, she has seventy stitches from her eye to the back of her head and more at the top of her head.

“Her eye socket is broken which means she can’t move her eye, she also broken a bone in her back. It took them five and a half hours of Friday to clean her wounds, it’s horrific.”
Shannon’s mother continued: “Shannon was in her granny’s house in Moyard on Wednesday evening. Her granny is almost ninety and requires 24-hour care as she is suffering from Parkinson’s disease and has recently suffered a stroke.

“I depend on Shannon to help me a lot, I have illnesses myself and my two other children have disabilities. She was doing some cleaning for her granny and making her dinner. When she was done she decided to go out with some friends – the worst decision of her life.

“Shannon was a passenger in the back of the car, she got out to go to the toilet and when she got back in she didn’t put her seatbelt back on. There were five of them in the car and Shannon came out the worst. One of the girls that was with her in the car pulled her out.”
Joanne continued: “I’m not one of these parents who claims their child is an angel, Shannon is a typical teenager. We are devastated at what she is going through and it’s not over for her yet.”

Shannon will be in hospital for at least another week and faces a further three surgeries. The tendon of the thumb on her left hand is shredded and she will require skin grafts to her arms and hand. Her mother says she could potentially lose the power in her left thumb.

She said: “This is a very important year for Shannon in school, she has her GCSEs and the hand that is damaged is her left hand, which is the hand she writes with.”

Shannon’s mother says she will be forever grateful to the two drivers who pulled over and stayed with her daughter on the scene until the ambulance came.

“Two cars pulled over, a woman and a man. The woman put Shannon in the back of her car and they both spoke to her until the ambulance arrived. They did everything they could to keep her conscious.

“A police officer told me he has no idea how she survived that. I cannot thank those people enough for staying with her, I believe my child would have died but for their help.”
Shannon’s mother is keen to point out the dangers of young people getting into cars and is stressing the importance of seatbelts.

“If raising awareness of what happened to my daughter can help save a life then maybe some good can come out of this awful situation,” she said.

A 21 year-old man has been charged with dangerous driving causing grievous bodily injury, driving whilst unfit, failing to stop, remain and report at the scene of an accident, possession of both class A and class C drugs and resisting arrest.

He was released on bail following an appearance at Belfast Magistrates Court on Friday, April 1.