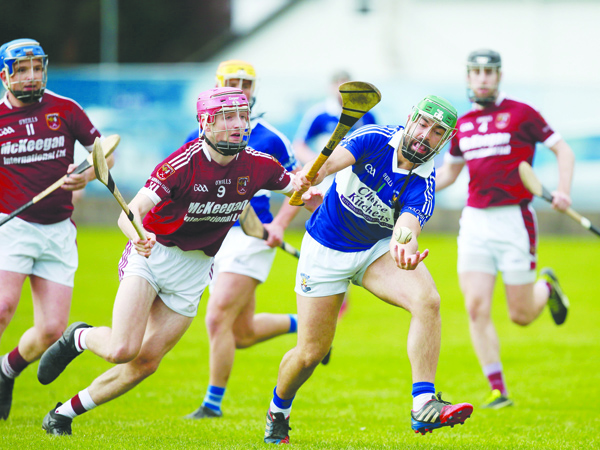 ST JOHN’S and Cushendall lock horns again this Sunday at Ballycastle two weeks on from their thrilling drawn semi-final in Dunloy.

Cushendall battled back from being five points down in the closing stages to take the lead following a late free from Neil McManus.

Yet, Ciaran Johnston had the final say on proceedings to nail a free under intense pressure and in the face of a strong cross-field wind.

As the underdogs, some may feel that St John’s had their chance the first day as favourites have a habit of winning replays.

However, St John’s manager Tony McNulty sees it differently and has urged his side to make to most of Sunday’s second chance to reach the county final.

“We just took our foot of the pedal in the last few minutes. I said before the game that we had to play for 64 or 65 minutes and we only played for 58 minutes,” said McNulty.

“We were four or five points ahead late on and we just switched off.

“We switched off long enough for them to get their goal and it was nervous at the end. While we scored to draw the game, we felt we had done enough to win the game.

“We’ll not be going into this match thinking we’ve missed the boat.

“When Neil McManus hit that free I though “here we go again” – thankfully Ciaran Johnston stepped up and scored his free. We were disappointed having led not to hold on.

“We can’t afford to switch off again – Cushendall are too good. When you have players like Neil McManus, Arron Graffin and Alex Delargy, we can’t afford to. I can’t see there being much in the game again this Sunday.”

McNulty also gave his views on the worrying scenes which marred the end of the match when two Cushendall supporters jumped over the wire at Dunloy to confront the St John’s players in the dying minutes of the game.

With such incidents in the spotlight in recent weeks, the intruders could have sparked a much more serious flashpoint, but order was soon restored.

While McNulty condemned the actions of those involved, he feared the game might have been brought to a premature end with his side one point in arrears at the time.

“There was a bit of carryon at the sideline which had nothing to do with us,” reflected McNulty

“The ball was in among four or five Cushendall men and one of their players pulled on it.
“He hit his own player and one of our players. It resulted in a bit of pushing – nothing serious.

“Two of their supporters jumped over the wire.

“I don’t know why, but they started throwing punches until the players got them off the pitch.

“I was glad the referee continued the game and gave us the chance to equalise and thankfully the people were identified.”

It is believed that the Cushendall player who was struck by his own teammate was Antrim ace Eoghan Campbell, who is likely to miss Sunday’s replay as a result of the hand injury sustained late in the drawn encounter.

St John’s will also be without one of their leading players for the remainder of the campaign after attacker Donal Carson departed for Australia last week, but Simon McCrory is expected to be fit to play a greater role in the replay having played the second half in the drawn game.

“Donal (Carson) is away to Australia so that’s a big blow for us,” added McNulty.

“I don’t know what happened, but there was something about the dates and he couldn’t get them changed.

“It is unfortunate because he has been playing well for us.

“In nearly every game, he has scored a goal for us. If Campbell is out for them, it evens things up a bit.

“Simon McCrory should be good to go. He is a super player for us and he has been outstanding in every game he has played this year. He wasn’t right for the last game. All being well, the two-week break will do him good.”

McNulty will also have the task of lifting the dual players in the club following their semi-final football defeat at the hands of Creggan last Sunday.

Senior finalists in 2017, the Johnnies were edged out 2-9 to 1-10 by Kevin Madden’s men at Glenavy, but McNulty, whose son Ryan is a key member of both squads, doesn’t think the dual players will suffer any hangover from that defeat.

“We are disappointed, but we have to hang in,” stated the Johnnies boss.

“We didn’t play as well as we can do on Sunday, so we can have no complaints.

“Things conspired against us on the day. Simon McDonagh’s wife went into labour on Sunday morning so he was unavailable. Peter McCallin wasn’t back from holiday in time.

“We had six or seven dual players in action on Sunday who will feature again this weekend.

“They’ll lift themselves up alright.

“It would have been great to going into the match trying to reach two senior finals, but we have to focus on Sunday’s game now.”

With Division One winners and 2017 champions Dunloy out following their surprise loss to Loughgiel, the remaining sides will all fancy their chances of lifting the Volunteer Cup later this month.

The Shamrocks will get a chance to view their final opponents over the course of 60 minutes in Ballycastle on Sunday, but it would come as no great surprise if an additional 20 minutes was required to separate St John’s and Cushendall.