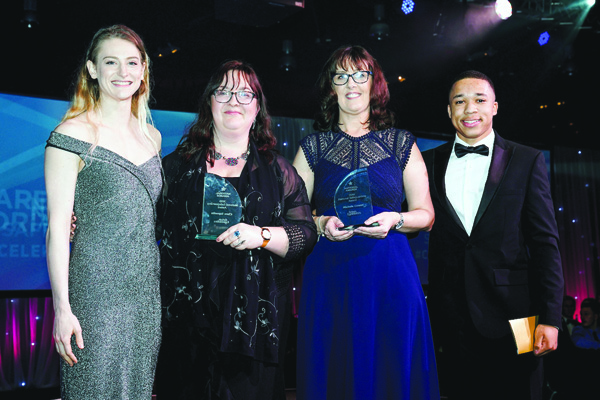 IT was a great night for North Belfast at the recent British Gymnastics National Awards as two local females picked up awards.

The awards were held at The International Centre in Telford, and acknowledged the outstanding achievements made by gymnasts, volunteers, coaches, clubs and community members across the country. Winners and recipients from grassroots to elite level were presented with their awards at the ceremony, which was hosted by BBC Breakfast sports presenter, Holly Hamilton.

Lucy, who is 17 years-old has been volunteering at the Ballysillan club for the past six years, helping to coach young gymnasts every Saturday and is often the first in the gym and the last out.

The National Young Volunteer Award recognises a young person between the ages of 11 and 18 who has volunteered their time and enthusiasm to help others enjoy gymnastics.

In November 2019, Lucy was also recognised for her contribution at Northern Ireland’s Sport Maker Awards, where she also won the Young Volunteer of the Year title.

Lucy was unable to attend the evening, but after finding out she had won, she said: “When I found out that I had won this award I was speechless and extremely emotional, I felt so thankful as this is an outstanding award to receive and I couldn’t stop smiling.

“What I enjoy about volunteering with gymnastics is seeing a child’s face light up when they do something I have taught them, and they smile as they surprise themselves that they are capable of it. I remember how I felt as a gymnast so I put all my emotion into coaching and ensure that the children are always enjoying themselves as well as improving.”

Contribution
Michele Cowan from Abbey was recognised for making a huge contribution to the welfare of the club’s staff and members.

The National Safeguarding award recognises a British Gymnastics member who has delivered a committed and enthusiastic service to the welfare and safeguarding of children within the gymnastics environment. This year, there were two winners of the award, with Michele recognised alongside Clare Saporita from Nottingham.

She has been instrumental in the implementation of all the club’s policies and has become a well-respected and approachable figure in the gym.

She continues to excel in her role by regularly attending educational courses and earlier this year she played a key part in organising and overseeing the club’s attendance at the British Gymnastics TeamGym Championships and Gymnaestrada – the biggest gymnastics festival in the world.

“I do the job and don’t expect any recognition, but to be honoured like this is a very special moment. I do it because I love the kids and I love gymnastics, and I want what’s best for them,” she said.

“Gymnastics isn’t just about competing. There’s a lot more to it. It’s about all those other kids who compete in displays and learn skills to make friends. I just love what I do.”