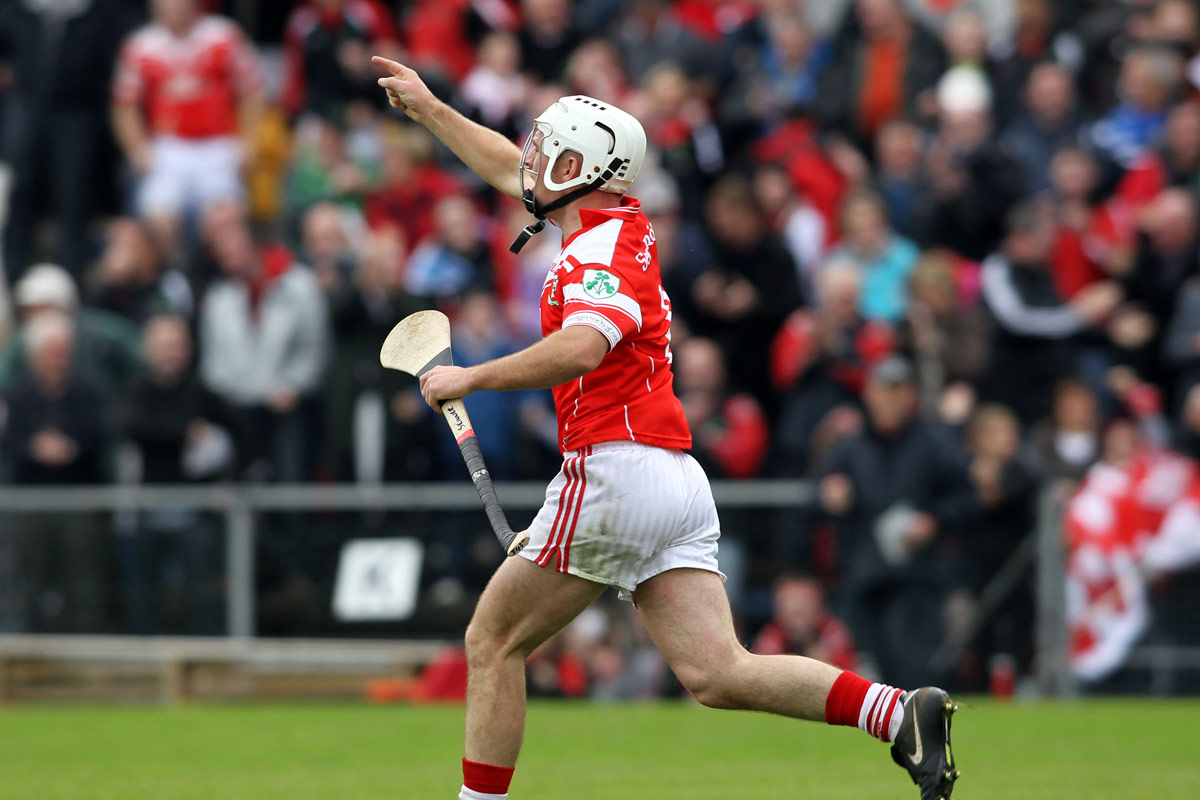 LOUGHGIEL Shamrocks collected their second Antrim hurling title in a row when a devastating final ten minute scoring burst ensured they pipped Cushendall to claim the Volunteer Cup at Casement Park on Sunday.

This was a repeat of last year’s final when a late charge helped the Shamrocks over the line and it was a similar story on what could be the last Antrim final played at the ‘old’ Casement Park before redevelopment.

Played in greasy conditions, the game took a little while to catch fire but Cushendall enjoyed most of the play, although they were unable to convert three early scoring chances.

A Liam Watson free put Loughgiel into an early lead but Ruairí Óg’s levelled minutes later through quite a bizarre score. A long free from Donal McNaughton appeared to hit the head of Declan McKillop and the sliothar spun up and over the bar.

This seemed to give the challengers a lease of life as two points - one a free and one ’65 - from Shane McNaughton eased the ‘Dall into the lead.

Loughgiel replied with two points from midfielder Barney McAuley, as the nip and tuck theme of the first half was set.

A McNaughton ’65 helped Cushendall back into the lead but Declan Laverty levelled once more after he was set up by a clever inside pass from Watson.

Cushendall nudged ahead once again when Conor Carson fired over but Watson stroked over a placed ball to cancel this out.

Cushendall were very much the dominant forced in the opening period but their superiority did not show on the scoreboard as they hit eight first half wides.

Two Shane McNaughton points late in the half - one a monster score from half way - brought the Ruairí Óg crowd to life but the champions were more economical with possession and two scores from Benny McCarry and Watson sent the sides in locked at 0-7 at the break after a thoroughly enjoyable opening 30 minutes.

The game picked up where it left off after the restart as the sides traded early scores.

Watson and Shane McNaughton were on target as there was little to choose between the teams in the early stages.

Cushendall were gradually getting on top with McNaughton and Paddy McGill pointing to give them the advantage.

Shea Casey was on target with his first touch after being introduced as a substitute to keep Loughgiel in touch but Paddy McNaughton took a fine score at the other in to reply.

It seemed Cushendall were on course to reclaim the trophy after losing the previous two finals when two McNaughton frees moved them four ahead with ten minutes to play.

Their tails were certainly up but then came a storming finish by Shamrocks that proved their championship credentials.

A Watson free from inside his own half made it a one score game as Loughgiel went in search of the goal that would reignite their assault on back-to-back titles.

Casey had the first opportunity when he rounded Odhran Scullion but his shot was tame and easily saved.

However, minutes later Benny McCarry was put through by a deft Watson flick and was bundled to the ground by a combination of Cushendall defenders for a penalty.

Watson stepped up and while his shot was half saved, there was sufficient power for the ball to squirm over the line to level the game.

This proved to be the turning point, as suddenly Loughgiel could do no wrong. From the resulting puck out Barney McAuley gathered and fired over to give his side the lead.

Joey Scullion and James Campbell then tried their luck and both found the range, as suddenly from being three in arrears Loughgiel were as many to the good.

Cushendall were then forced to look for a levelling goal and when Karl McKeegan was fouled, Shane McNaughton had an opportunity from a 21-metre free but his shot was saved out for a ‘65. This proved to be the last real chance as Loughgiel flooded their defence and held firm as the final whistle sounded amid jubilant scenes to confirm they were Antrim senior hurling champions for the second year in succession.