McKinley happy to get well-deserved break 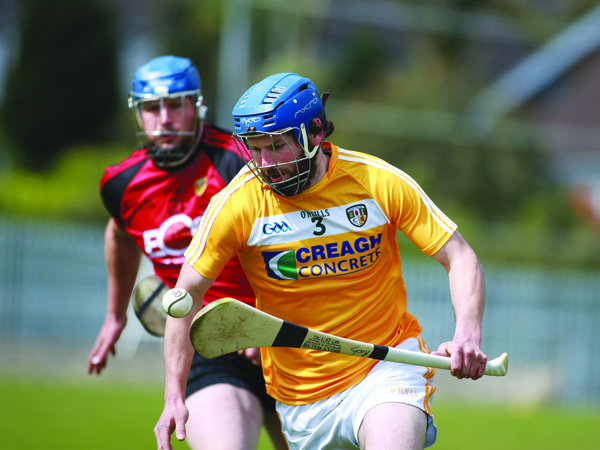 Antrim joint-manager, Dominic McKinley has been delighted with the performances of John ‘Rocky’ Dillon this season

ANTRIM joint-manager, Dominic McKinley said he and the players were delighted to give themselves a break from action until May 20 thanks to Saturday’s win over Down in Cushendall.

The 12-point win ensured the Saffrons took the direct route into the Christy Ring Cup semi-final with Down now forced into the last chance saloon as they travel to London this weekend.

Having played six big games in as many weeks between League, Ulster Championship and Christy Ring Cup, the mental and physical stamina of the Antrim players was well tested, but now they can get some time to get some players healthy again and look ahead to their last four clash in two weeks.

“Look at the players and the preparation for matches between the league, the Ulster final and then those two matches there - there’s no doubt they’re drained. They will play tomorrow again (Sunday) and even look at last week (against Carlow). They left at five o’clock on Friday evening and get home at 11 on Saturday night. That’s that weekend gone and then they’re out this weekend again. It’s a telling factor, no doubt about that.

“Overall we are content to be in the semi-final of the Christy Ring. We’ll maybe now get two weeks of hurling during training on Tuesday night and again on Thursday.”

McKinley admits it wasn’t Antrim’s best performance of the year against Down, but it was simply a game that had to be won and in that regard, it was mission accomplished.

“It was poor to say the least. They (Down) did their homework in the first half,” he acknowledged.

“We’d be disappointed with the chances we didn’t take. We created three goal chances and didn’t take any which is a disappointing factor, but there were two good saves there too and we did create them.

“I thought our hurling was good at times, but it was scrappy at times in the second half. Once we lost a man, we lost our shape a wee bit there too.”

One major plus on the day was the performance of John Dillon who has grown into his role at full-back this season. The Armoy man was used in the forwards at times last year, but McKinley feels he has been a revelation at the back.

“‘Rocky’ has developed and pound-for-pound has been our best player,” he opined.

“He’s playing with a lot of heart and using his head at the right times, so there are good thing that have come out.

“He is a great fella and we are only getting to know him a bit now. Did I know he could do the like of that? No If I’m honest.

“We were talking on Tuesday night if ‘Magic’ Johnson would go into full-forward, we wouldn’t be too worried about it because under the high ball, Rocky seems to win those 50-50 balls.”

Antrim will have Neil McManus back for the semi-final after the Cushendall man missed Saturday’s game due to his wedding, while McKinley is hopeful that Paul Shiels and Deaghlan Murphy can return from injury although Matthew Donnelly’s year is over after getting injured whilst skiing.

“It’s been tough for us all so hopefully we can get recharged again. We know that wasn’t good enough and our players can do a lot better than that, but we have total confidence and belief in our players,” said the Loughgiel man.

“They have belief in what we are doing and as I said, people have been saying a lot about them but look at last weekend. It was a full weekend they gave up and the same this weekend. Neil McManus’ wedding is today and they players have spent the day here. We got the result and will move on.”

With Antrim and Wicklow already in the last four, they will look at who will join them after this weekend as Down travel to London and Carlow take on Kildare.

McKinley admits he is expecting to face Carlow again at some point if Antrim are to win the competition and predicts a potential fourth meeting between the teams will be just as tight as their three meetings already this year.

“You don’t want to be looking ahead and disrespecting the other teams. The semi-final draw when it’s made, we’ll see but there is every chance we could meet Carlow again,” he accepts.

“That’s one of those games, nip-and-tuck. We have total respect for them but know that on our day we can beat them too.”