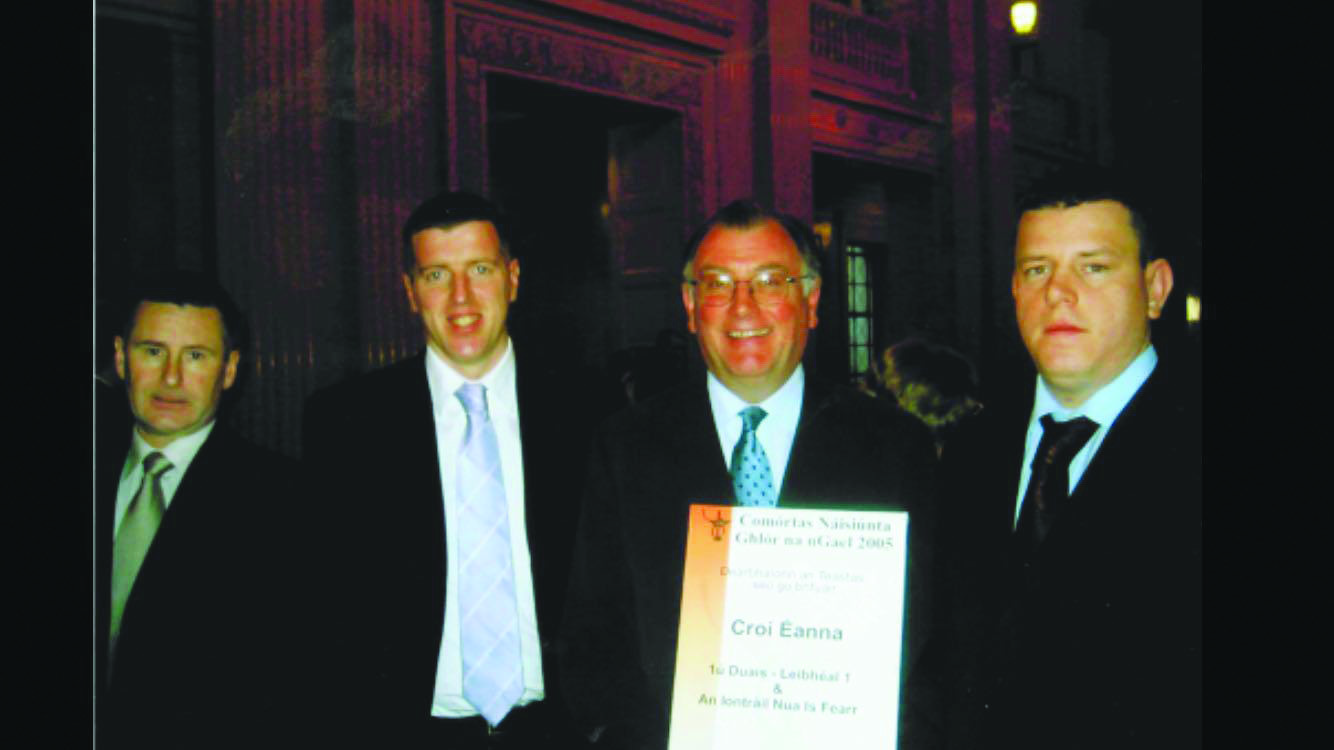 JOE McDonagh success has not been the sole preserve of Antrim’s senior hurlers recently as it has been announced the Naomh Éanna CLG, Glengormley received the Gold Medal Award from Fondúireacht Sheosaimh Mhic Dhonncha - a funding scheme to support clubs with the promotion and development of the Irish language which was established by the GAA and Glór na nGael in Joe’s memory.

Given their shared history and the fact that Joe McDonagh, who died suddenly in 2016, was President of both, they came together to honour the Galway man’s memory to recognise the promotion of the Irish language within the GAA.

Fondúireacht Sheosaimh Mhic Dhonncha, The Joe McDonagh Foundation, is a support service provided by Glór na nGael and the Gaelic Athletic Association to GAA clubs wishing to further the Irish Language in their community.

Most clubs have been promoting the Irish language in some form or another, but The Foundation is there to help develop that promotion in a more measured and planned fashion.

“What was particularly resonant for us was that Joe McDonagh was President of the GAA in 1997 when Gerry Devlin (Naomh Éanna club member and senior football manager at the time) was shot dead at the gates of our club,” said Naomh Éanna Vice-Chairman, Niall Murphy.

“He came up to the funeral and wake, and was a very comforting, authoritative friend of our club and the Devlin family in our darkest hour.

“He always remained in contact with the club and family, so that is something we’ll always cherish.

“When we opened our current pitch in 1998, Joe McDonagh came up and performed the opening ceremony on the first weekend of May that year.”

McDonagh’s link with Naomh Éanna didn’t end there, as when his tenure as Uachtarán Cumann Luthchleas Gael ended in 2000, he moved onto fill the same role for Glór na nGael and awarded Naomh Éanna their first ever national award for the club at a 2005 reception in Stormont.

“He recognised our achievement of setting up a Naíscoil within the St Enda’s club community and was delighted that we had taken an interest in the promotion of Irish language,” added Murphy.

“That meant a lot to us, so when we saw the GAA had launched a scheme to recognise the promotion of the Irish language, we just felt it was a natural fit.”

The club can now boast an unrivalled commitment to our native language with Croí Éanna, Naíscoil and Gaelscoil Éanna all providing enhanced opportunities and quality Irish medium education for the greater Glengormley area, all within the site of the GAA club.

Croí Éanna helped build a £2million community hall, which now accommodates a range of community orientated activities including juvenile sport and the senior classes of Gaelscoil Éanna which now has over 230 children registered, having began with just seven when it opened in 2007.

“Every single pupil at the Gaelscoil wears our club colours, bearing our club crest. Their most formative and fond memories will be on our site.  There has been an overwhelming crossover of children at the Gaelscoil who are members of the club,” said the Naomh Éanna Vice-Chair.

“Gaelscoil Éanna has one of the smaller enrolments of the five or six primary schools  in Glengormley but it provides the most juvenile members for the club and that’s something we’re exceptionally proud of. Automatically there is a whole new generation that will grow through our club, all through the medium of Irish.”

Just three gold medals were awarded in 2020, with Naomh Éanna the only non-Gaeltacht club too achieve this status in Ireland. The other two both game from Connemara in Galway: An Spidéal and Leitir Móir.

Ironically, Naomh Éanna defeated An Spidéal in last year’s All-Ireland Club Intermediate Championship semi-final, a game that was broadcast live on TG4 with the Antrim champions providing interviews in Irish on the day from all age ranges in the club.

“None of this would have been possible without the stewardship of our club cultural officer, Rosie Kinnear, who maintains Irish classes for adults and all cultural activities within the club community,” Murphy continued.

“Rosie did the interview with Glór na nGael that resulted in our gold medal award and through her hard work and dedication, she has continued to increase the high standard of Irish throughout all club activities.”