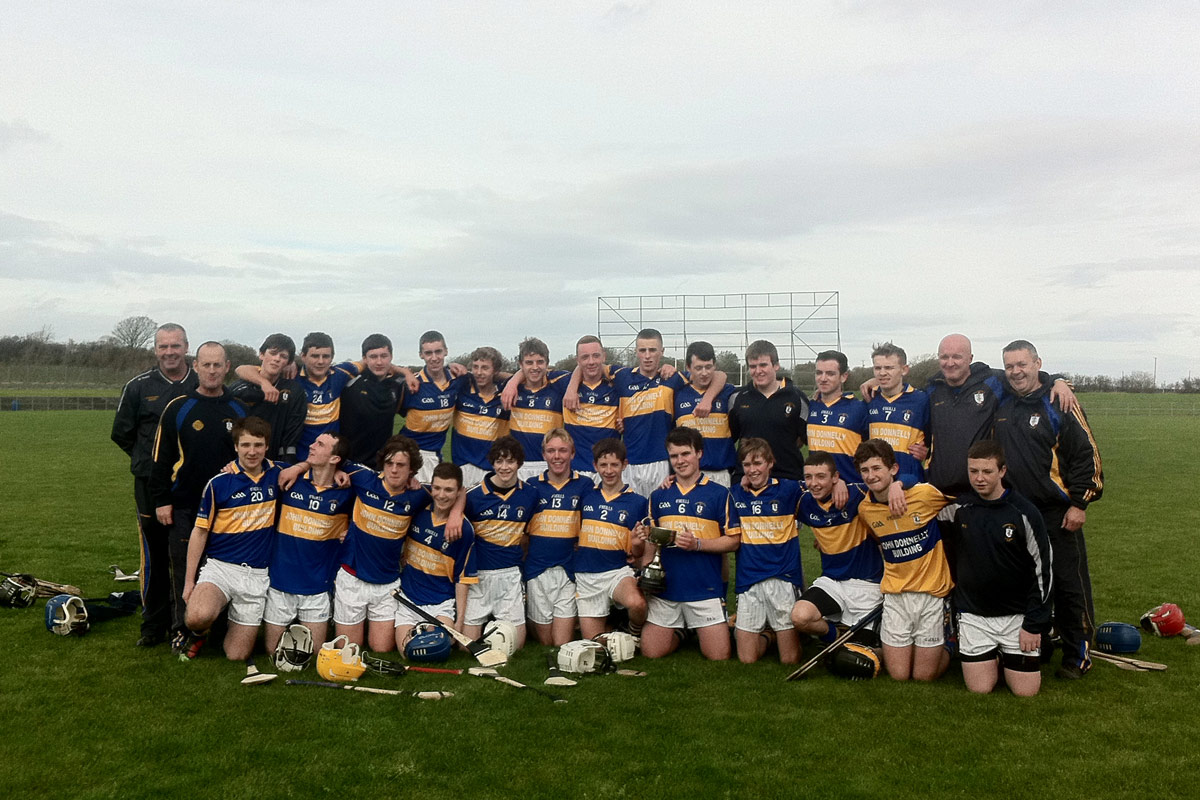 Rossa’s U16 hurlers made a bit of history at the weekend by becoming the first team outside of the Glens to win the North Antrim U16 Hurling League.

Rossa played Cushendall for the fourth time this year and managed to win a very tough match by seven points.

Domhnall Moran the Rossa captain gave an inspired performance from centre half back and he scored two of the three Rossa goals.

Rossa went into the break nine points up thanks to some great defending by the entire back six and a great individual goal by Aidan Orchin.

Cushendall came out in the second half with all guns blazing and with the aid of a strong wind Christy McNaughton reduced the lead to seven with two quick points. Feargal Leyden, who was having a great game on Ryan McCambridge, broke free and after three hand passes Seaghan Shannon sent the ball over the bar for the score of the game.

From then on Rossa looked like worthy winners and the teams traded points up until the last moment of the game when Cushendall scored a screamer of a goal, giving James Connolly in the Rossa nets no chance.

This was a great game of hurling for this time of year and it was played in a great spirit by two fully committed teams.

Rossa’s U16 footballers will play Glen Maghera in the quarter-final of the Paul McGirr Ulster Tournament.

Rossa, after a successful start to their campaign against Fermanagh champions St Pat’s Donagh, take on Derry champions Glen on Sunday 30 October  in what promises to be a very close and excellent game.

Both teams have played each other several times over the years from U12 level right through to now.

All support is welcome and there will be a supporters bus organised, details and time of match will be texted when known and posted on the club website at www.odonovanrossagac.net

The Rossa U9 hurlers were also celebrating recently as they won the Kilmacud Crokes Hurling Blitz.

All support welcome. Tickets available at Rossa House from Juvenile Committee Members or from any senior playing member of the club.  The draw is planned to take place at the end of the month 28 October in Rossa House.

There will be a football blitz for the U8 and U10 teams this weekend (Sunday 23 October), all players to meet at Rossa Park for 10am.

Each team mentor will continue to notify all players’ parents, by text or phone, of all fixtures and training times.

Below is a list of juvenile achievements from Rossa teams. It has been a year to remember on all fronts.

U12 North Antrim A Hurling League

U15 All County Antrim Óg Sport

U16 South Antrim Hurling A League

U16 North Antrim A Hurling League

U16 South Antrim Hurling B League

U16 South Antrim Hurling A Championship

U16 South Antrim Hurling B Championship

U16 All County Antrim A Hurling Championship

U16 South Antrim Football A League

U16 South Antrim Football A Championship

U16 All County Football A Championship

Minor B All County Hurling Championship

Minor B All County Hurling Championship