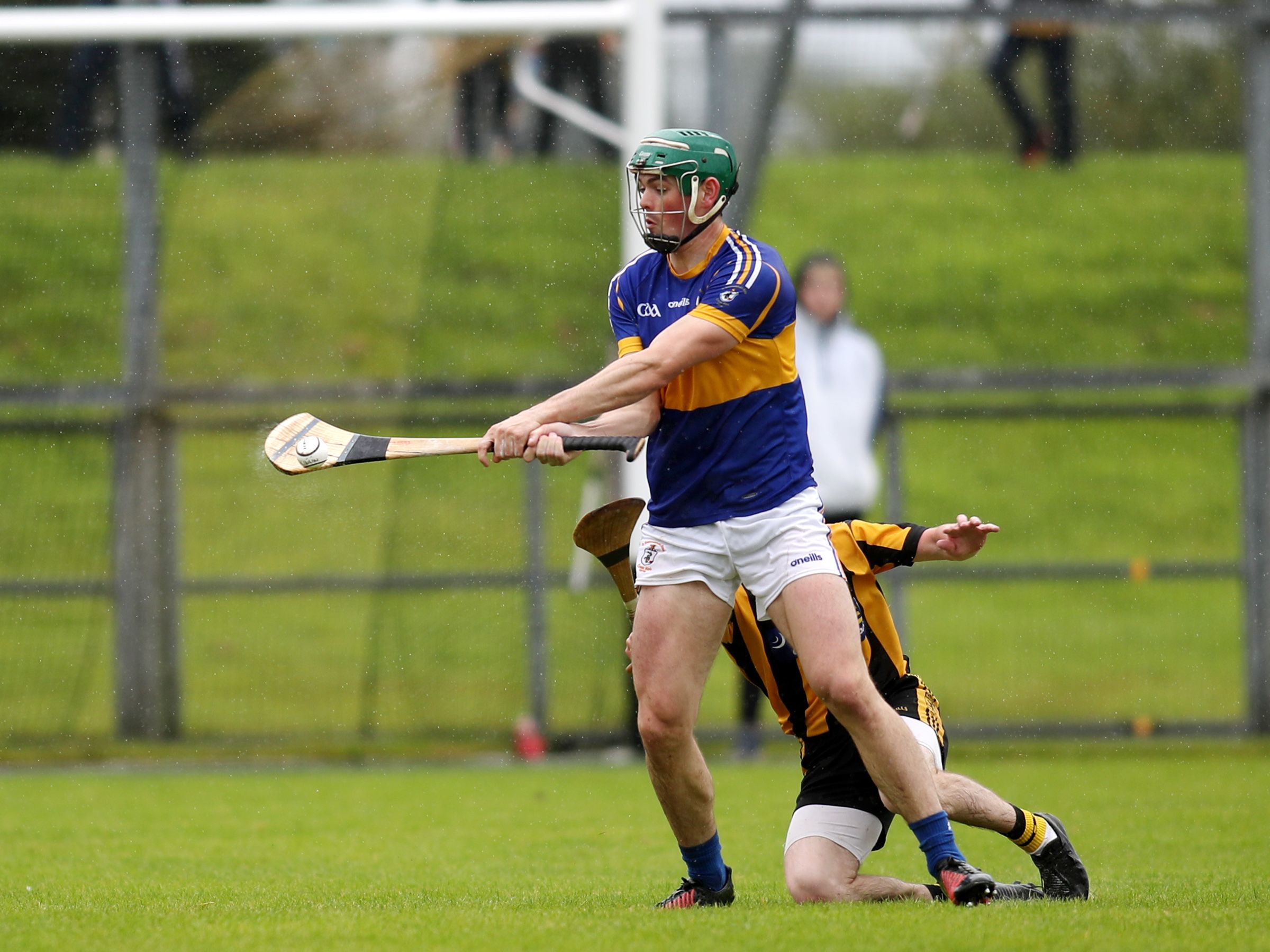 IN what was the tightest of the two groups in the Antrim Senior Hurling Championship, Rossa cut loose to seal a quarter-final against Cushendall on Saturday as two goals in each half saw them overcome Ballycastle as a wet Pairc Mac Uílín on Sunday afternoon.

For the third week in-a-row, Rossa brought a savage intensity and huge work ethic to the game, but this time their efforts paid off having been denied victories in their previous games when caught late.

A Deaglan Murphy goal in the opening minute sent them on their way and when Gerard Walsh netted a penalty four minutes before the break, they were in a commanding position.

Ballycastle were never far away in this game for long stretches, but Thomas Morgan did what he does best and broke through for a pair of goals in the second period to seal an eight-point win and secure third place in the table.

Given what has preceded this weekend, it was rather cruel for Ballycastle to exit the Championship, but somebody was going to be left disappointed in what turned into a 'Group of Death' and they just couldn't make enough headway in attack to take charge in this one.

Instead, it was Rossa who had the extra craft in attack, playing some crisp, short passes to carve open the Ballycastle defence to land the decisive scores. However, it would be wrong to overlook the incredible effort at the back with Niall Crossan, Conal Shannon, Aidan and Ciaran Orchin tenacious, Stephen Shannon outstanding with Deaglan Murphy sweeping, while Gerard Walsh delivered another mammoth display, keeping tabs on Ciaran Clarke throughout.

Michael Armstrong put in another incredible shift to dive his team on and Aodhán O'Brien grew into the game as it progressed, but the introduction of Morgan for the injured Conall Shannon provided that extra spark in attack that saw them home.

For the hosts, Diarmuid McShane did little wrong and chipped in with three points, whilst Matthew Donnelly and Conor Boyd were solid in defence, but they just couldn't gain the upper hand in the forward line against a Rossa team who wouldn't be denied.

"You knew it was there and were hoping for the breakthrough," said Rossa manager Colly Murphy.

"Today, we got that fluke with a shot coming off the post and Deaglan was there to put it in the back of the net. It happened the other night against St John's (football) when Richie Gowdy got it. You need that bit of luck, but again, I thought our work-rate, effort, skill and everything was fantastic."

If the breaks didn't fall Rossa's way in recent weeks, their fortunes changed immediately in this game as a Michael Armstrong shot for a point in the opening minute came back off the post and dropped to Murphy who buried to the net.

McShane and Clarke (free) got Ballycastle on the board, but Rossa were well on to and after Tiernan Murphy pointed, they had a huge chance for a second goal when Armstrong raced in on goal, but the wet sliotar spited off his boot and wide.

Stephen Shannon did raise white and James Connolly knocked over a pair of placed balls to put them 1-4 to 0-2 ahead at the water break, but Ballycastle responded well upon the resumption with Diamond McShane, James McShane and Clarke splitting the posts to move them to within two.

However, the momentum would swing back to Rossa on 26 minutes when Aodhán O'Brien was bundled over when about to pull the trigger and a penalty was awarded.

Gerard Walsh stepped ups and whilst McQuillans' goalkeeper Brendan Connor got down to get his stick to the shot, there was enough power on the shot to see it carry into the net.

The hosts replied with scores from Clarke and Ciarán Butler but Rossa finished the half stronger as Stephen Beatty and Christopher McGuinness found their range to put them 2-6 to 0-7 ahead at the break.

The rain continued to pour down but Ballycastle opened the second period brightly with Diarmud McShane pointing, but Rossa were back on the attack and Connor had to make a great save to deny Tiernan Murphy a goal, although Thomas Morgan did raise white soon after.

Clarke knocked over frees either side of three in-a-row from Rossa through Connolly (two) and Seaghan Shannon to leave two goals in it, but that became three on 43 minutes when Morgan showed a clean pair of heels to the home defence and crashed home.

This was cancelled out as Clarke (two) and Seamus McAuley pointed just before the water break, but Ballycastle's hopes were extinguished with Rossa scoring their fourth goal that was the result of a superb move that saw O'Brien play a clever low ball down to Tiernan Murphy on the left. He passed inside to Stephen Beatty who offloaded to Morgan to scamper clear and find the net on 54 minutes.

Ballycastle did hit back immediately when Caolan Connor got in for a goal, but points from Dara Rocks, Connolly and O'Brien moved Rossa out of sight.

The hosts kept battling with Clarke seeing a 20-metre free saved over from a point and while James McAuley had the final say with a point after one from Dominic McEnhill on a Rossa breakaway, but the game had by now been decided with the Belfast outfit through to the quarter-finals, condemning Ballycastle to elimination from this year's Championship.

"Fair play to Ballycastle; they were so competitive and they were soo hard and fair, which is a testament to every one of the Ballycastle players," added the Rossa manager.

"You look at Clarkey (Ciaran Clarke), Matty (Donnelly), Boydy (Conor Boyd) and all those players who are class acts and hurled for 65 minutes, but we deserved it.

"When we were on top we got our scores and they proved decisive in the end but again, I could nearly repeat word-for-word from last week (against Dunloy), I was delighted."