Saffrons seeking to down the Dubs 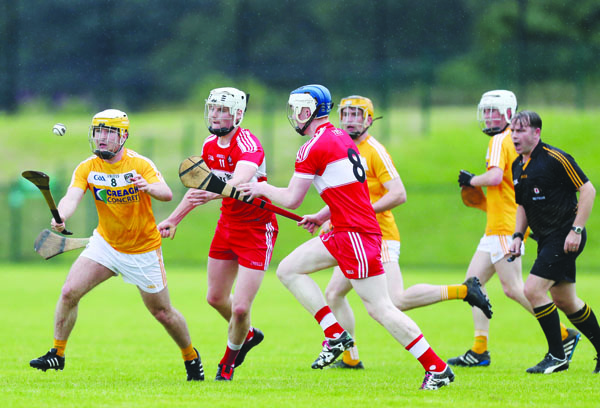 Antrim’s Michael McGreevy gets away from Derry duo Eoghan O’Kane and Martin Quinn during the Ulster final at Owenbeg. The provincial champions return to action on Saturday when they take on Dublin in the All-Ireland quarter-final in Newry

WITH the Danny McNaughton Cup safely secured for a fifth successive season, Antrim’s minor hurlers now turn their attention to the challenge of Dublin in Saturday’s All-Ireland MHC quarter-final.

There was a particularly savage loss inflicted on the young Saffrons in 2013 when the great Waterford side romped to a 4-20 to 1-9 win in Ashbourne. Down were the last team to deny Antrim at provincial level, but they didn’t fare any better in 2012 – losing 3-19 to 0-5 to Clare.

History suggests the class of 2017 will need to be an exceptional vintage to cause an upset this weekend and Antrim manager Colly Murphy says he is realistic about his side’s chances of success.

“We are under no illusions, playing in the All-Ireland series is a massive step up in class,” said Murphy. “We’ll go down as best prepared as we can and we will give it a lash. If it’s good enough, magic. If not, we’ll not be found wanting.

“We can only work with what we have got. They are an honest bunch, they have been knocking their pan in since February. “We had a good go in the Celtic Challenge. We can ask no more of them.”

Antrim won the Ulster title with a fairly comprehensive 3-13 to 2-8 win over Derry in Owenbeg. First half goals from Ed McQuillan and Tiarnan Murphy helped the Saffrons into a 2-4 to 0-4 lead at half-time before the hosts fought back in the second half. A penalty from dual star, Richie Mullan and a goal from defender, Ruairi Rafferty helped the Oak Leafers stage a brief comeback, but McQuillan’s second major late on ensured an eight-point win for the Saffrons.

Murphy was pleased with his side’s effort in tough playing conditions, although he felt his side were hard done by when Scott Walsh was adjudged to have fouled Tiarnan McHugh for Derry’s penalty.

“The penalty was never a penalty when you look back on it,” claimed Murphy. “We studied it. It was a great tackle from Phelim Lennon and then Tiarnan McHugh (Derry full-forward) was on the ground. As he was getting up, he pulled Scott Walsh (Antrim full-back) down on top of him. “It was unbelievable. It was never a penalty.”

He added: “When we looked back on the video, the shooting was brutal. We have done a bit of work on that in training.”

Antrim’s preparation for Saturday’s game received a boost when former Tipperary All-Ireland winning manager Liam Sheedy took a training session last weekend. It was part of Antrim’s reward for winning the U17 Celtic Challenge last month and Murphy is hoping it could give the Saffrons an added edge this weekend.

“Liam Sheedy came up last weekend to train the lads,” said Murphy. “We asked if he could come up before the All-Ireland quarter-final and he agreed to come on Saturday. “We were all looking forward to it.

“It was good to get his insight, he has been around the block and he knows what it takes. “He had a look at our boys and hopefully we can take what he said on board.”

Murphy also added that he had no concerns over the venue for Saturday’s game. Antrim played their Division 2A final over Carlow in Newry earlier this year and the pitch came in for criticism from both camps. However, Murphy is hoping that the summer weather will bring about an ideal playing surface in Pairc Esler.

“I know it is a football pitch, but it has proper catch nets. “We have played in Cavan and Crossmaglen before and I think it is a fair venue for both teams.”

Murphy has a full squad to pick from with Ballycastle’s Oisin McAuley available after missing the Ulster final due to holiday commitments. Ed McQuillan is also expected to recover after picking up a knock during Cushendall’s Darragh Cup win over Ballycastle last week.

History suggests Antrim’s involvement in the All-Ireland Minor Championship will end on Saturday after a humbling double-digit defeat. However, Dublin are the one team that, traditionally, has struggled to put Antrim away. If the Saffrons can improve their shooting from the Ulster final and take their goal chances when they come, they have every reason to believe that they could cause a massive upset.