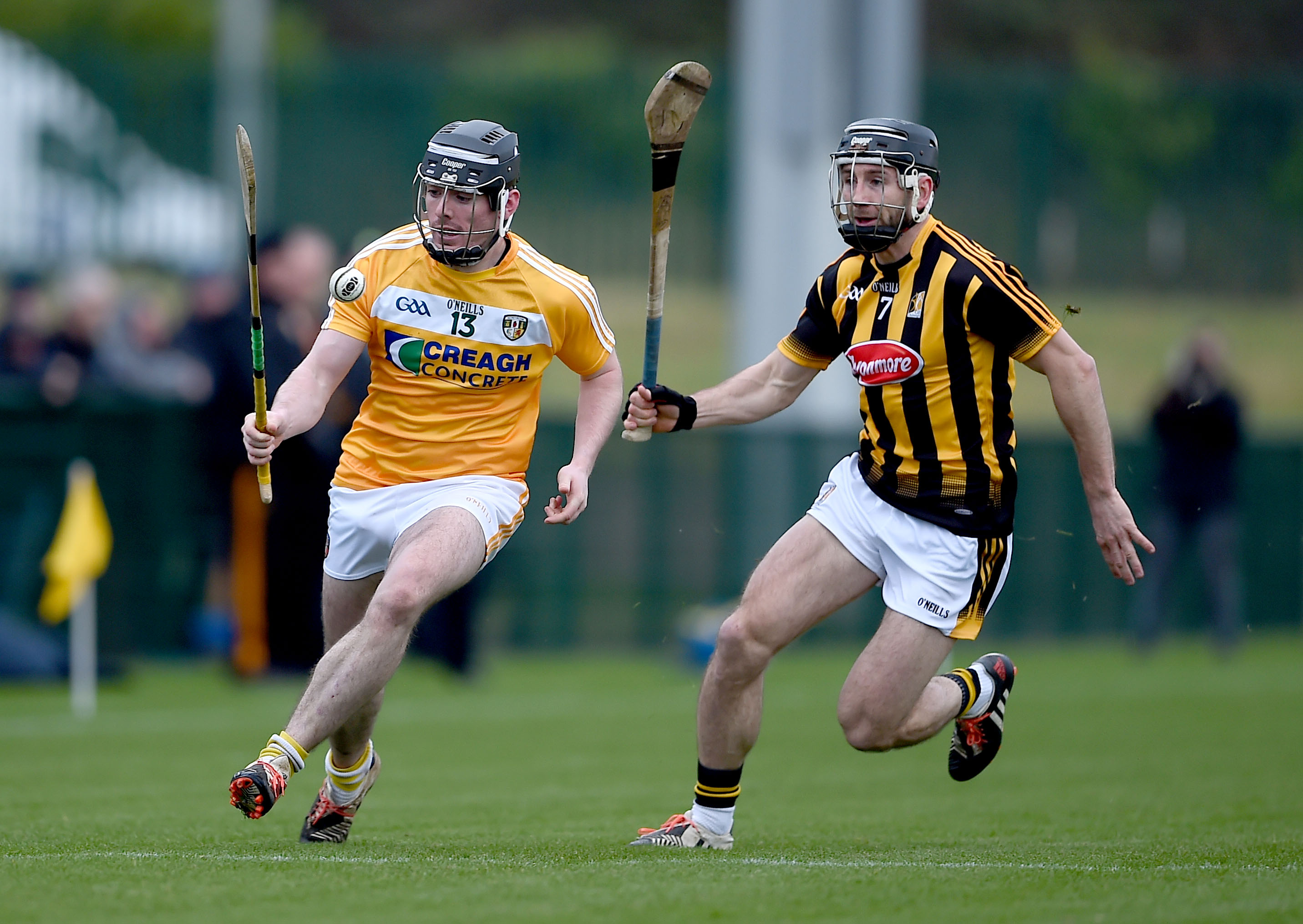 ANTRIM manager Terence McNaughton insists he was not too despondent after Sunday’s drubbing at the hands of Kilkenny.

The Walsh Cup loss may have been a harrowing experience for a number of the younger Saffrons, but the heavy defeat was littered with positives. Once again, goalkeeper Chrissy O’Connell was on top form.

Despite conceding six goals, the Loughgiel clubman made at least another six point-blank saves throughout the high-scoring contest. Neil McManus and Conor McCann, who were absent last season, won plenty of breaks in the first half while Niall McKenna continues to impress in the forward line.

After conceding two early goals, Antrim battled back to trail 2-12 to 0-10 at the break but the gap between the two counties was exposed by a ruthless Kilkenny side who extended their lead to 26 points at the full-time whistle. McNaughton noted how the Cats ruthlessly punished Antrim for any errors, especially in the second half, and hopes that the Saffrons can learn from the experience of playing against one of the leading sides in the country.

“When you are playing a team at that level, all mistakes are punished. There are no second chances,” said McNaughton. “If you don’t get it out, you’re are in trouble. They were cutting out cross-field balls and, if we tried to play it out of defence, they had so many players running back.

“That’s the level they operate at. “The more games we get at that level, the better. Long term, our goal is to be competing with the top teams but we are a long way off.”

He added: “A lot of players would have been playing against Kilkenny for the first time and there was maybe a fear factor there – giving them too much respect.

“I wasn’t coming away from the game too negative. I thought we played well in the first half and you have to take the positives from the game.”

As if to demonstrate their quality, Kilkenny made a couple of changes prior to throw-in with TJ Reid coming into the full-forward line to join Richie Hogan and Walter Walsh in a lethal Kilkenny attack.

In contrast, Antrim gave game-time to St Paul’s defender Stephen Rooney while fellow rookies James McNaughton, Tiernan Coyle and Sean McBride all made second half appearances against the Cats.

McNaughton said the decision to include so many household names showed ‘respect’ to the Saffrons but lamented the gulf in class between the sides. “It is a steep learning curve for us,” said McNaughton.

“There is a huge gap between where they are and where we are – there is no point in saying anything different. “Their movement and workrate was something we couldn’t deal with, but they had 11 of their All-Ireland team playing so they weren’t experimenting.

“You are asking a young fella playing in Division Two or Division Three in Antrim to go out and mark Richie Hogan or TJ Reid. “It is like sending a boxer in for his first fight against Mayweather.”

Following Sunday’s heavy defeat, Antrim have little more than pride to play for this weekend as they bring their Walsh Cup campaign to a close with a home tie against the students of DCU at Jordanstown (2pm).

McNaughton reiterated that Antrim won’t dwell on their loss to Brian Cody’s side as he says the counties are operating at different levels. “We have always set out to bring in people who want to be there and want to hurl for Antrim,” added the Cushendall native.

“We are on that road now. We don’t want to put a sticking plaster over the thing.

“I played on Antrim teams that got worse hidings than that but what do you do? You have to get back up and go again. As long as you play the best can... that isn’t always reflected on the scoreboard. “We scored 19 points against Kilkenny – that’s not to be sniffed at.”