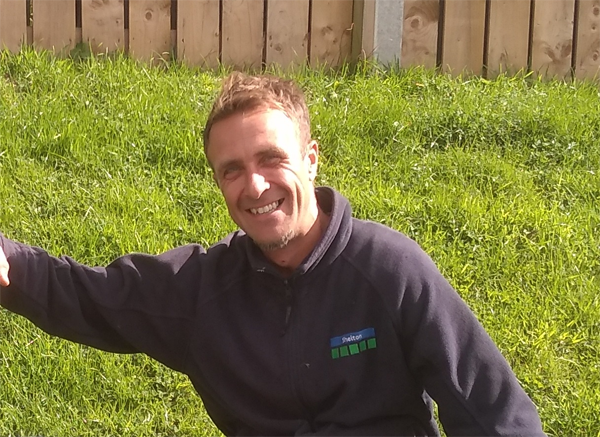 THE sister of a Newtownabbey man who has been missing for a week has pleaded for his safe return.
Robert Holmes was last seen in the Lakeview Avenue area of Newtownabbey shortly after 12.50pm last Wednesday, October 17.
The 42 year-old, who had just started a new job, is a well-known singer-songwriter on the local music scene. The band Snow Patrol are among the high-profile names lending their support to the appeal to find missing Robert.
Joanne Clarke told Daily Belfast she just wants Robert to return home.
“He has been missing for a week now. I found out last Wednesday evening at around 7pm that he was missing,” she said.
“I was devastated. I just thought maybe he was away for a long walk or something like that. It was hard to take in.
“It is totally out of character for him. Robert would often go on long walks for a couple of hours so the fact he hasn’t returned home is very worrying.
“He was working that day and had just started new job and he absolutely loved it. He had met new friends and joined a walking group.
“We all miss him terribly. He has got three beautiful children, aged 16, 12 and 9.
“We just want him to come home. He is not in any trouble.
“There have been no sightings or anything, which is very concerning.
“I would appeal to everyone who has private CCTV from that day to check their footage. It doesn’t have to be the Newtownabbey area – he could literally be anywhere.”.
Superintendent Darrin Jones said: “Robert is described as being 6ft tall, of a slim build with blue eyes, dirty fair hair and facial stubble. He was believed to have been wearing a dark, waterproof coat, a grey/black hooded top and a green beanie style hat.
“It is one week since Robert was reported missing, and his family and friends are extremely worried about him. They’re desperate to know where their loved one is, and if he is safe and well.
“Robert, if you read or hear this appeal, please get in touch with your family or with us.
“I would also appeal to anyone who has seen Robert, or knows of his current whereabouts, to please make contact with police by calling 101, quoting reference number 557 17/10/18.”