Six toddlers expelled from nursery after a clerical blunder 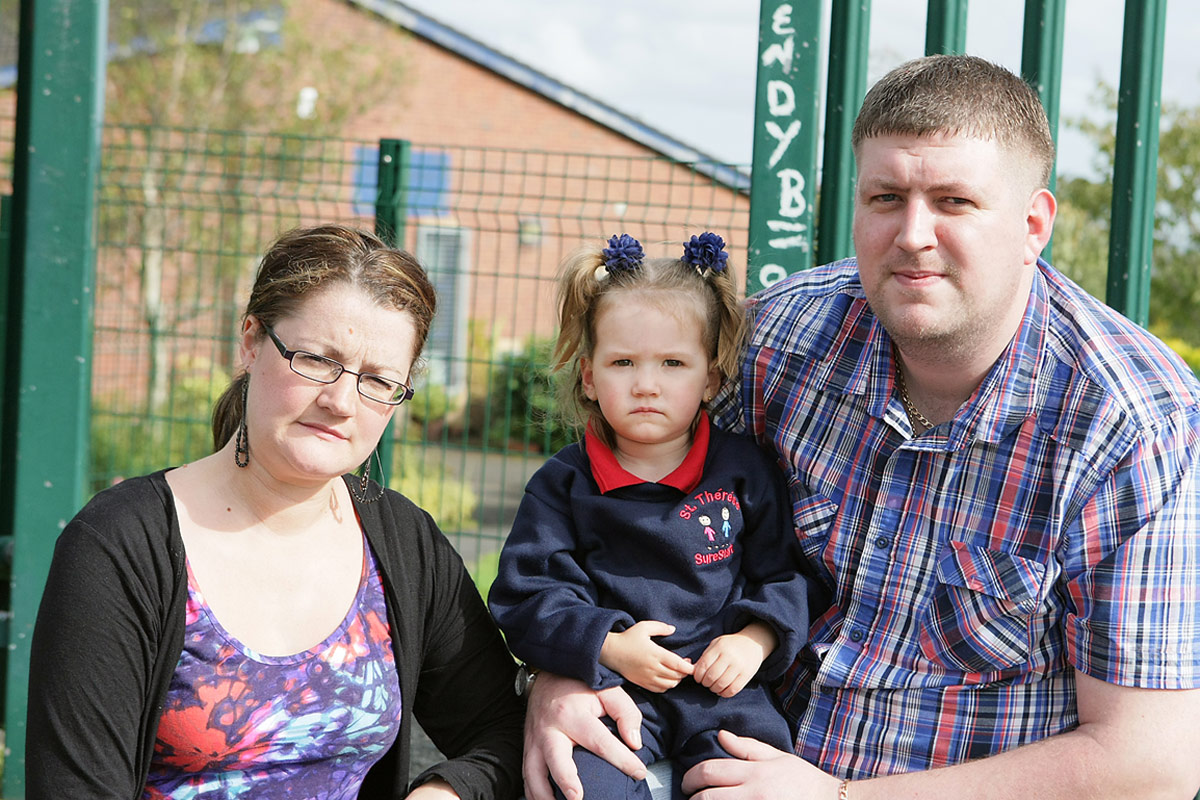 THE mother of a Poleglass toddler says she and her daughter have been left devastated after the child was one of six excluded by a local playgroup due to an administrative error.

Michelle Breslin from Ardcaoin Green was speaking to the Andersonstown News after she was told late last week that her two-year-old daughter Sian was too young to be attending the Sure Start playgroup based in nearby St Therese’s Nursery School as the admission criteria had been applied incorrectly.

Five other toddlers attending the group have also had to leave due to the administrative error, all of whom had been attending the playgroup for four weeks. It is believed the decision to exclude the children was taken by the management board of Colin Sure Start which oversees the running and administration of the nursery.

“On Thursday, [September 29] I went to leave Sian off and myself and one of the mothers were brought into the office,” explained Michelle. “We were sat down and told that the committee had been down that morning and said that the six children would be unable to stay due to them being too young. Apparently the wrong criteria had been applied to these six children so they could not stay any more. We’re not allowed to bring them back and that was the end of it. It’s a real shame as it’s a fantastic playgroup and the teachers were so upset when they told us the news. It came as a shock to them too.”

Michelle explained the new criteria that should have been applied require children to be “aged two years and two months on the first of July” for admission to the Sure Start playgroup.

“But we were told you have to be two years and two months by the time you started the group in September,” she said. “This week would have been Sian’s fourth week there. If someone has messed up and cannot calculate a child’s age from their birth certificate, which I gave Sure Start when applying last year, to me that’s extremely silly. I don’t understand how a grown adult cannot count up from a birth certificate.”

Little Sian has been badly affected by the exclusion and “feels like she’s done something wrong”, according to her distraught mum.

“She doesn’t understand why she can’t go to the group and see her new wee friends any more,” said Michelle. “It’s psychologically damaging to her. She might only be two, but she understands what’s going on and it’s made worse by the fact that we live two doors away from the nursery school. She always grabs on to the gate when we walk past shouting, ‘My friends! My friends!’”

Michelle said she wants Sian re-admitted to the playgroup.

“You cannot make the children affected suffer for an adult’s mistake,” she said. “It’s not the playgroup’s fault either, but it’s somebody’s fault. Why wont the Sure Start management board come out and tell us how and why they came to this decision?

“They just don’t talk to me when I ask for a reason why Sian cannot go there any more. I just want her back in the group as the school is fantastic, the staff are fantastic and we were delighted to have our daughter there. Why should she miss out because of an adult’s mistake?”

When contacted by the Andersonstown News this week the board of Colin Sure Start said there was “no-one available to comment at the moment”.