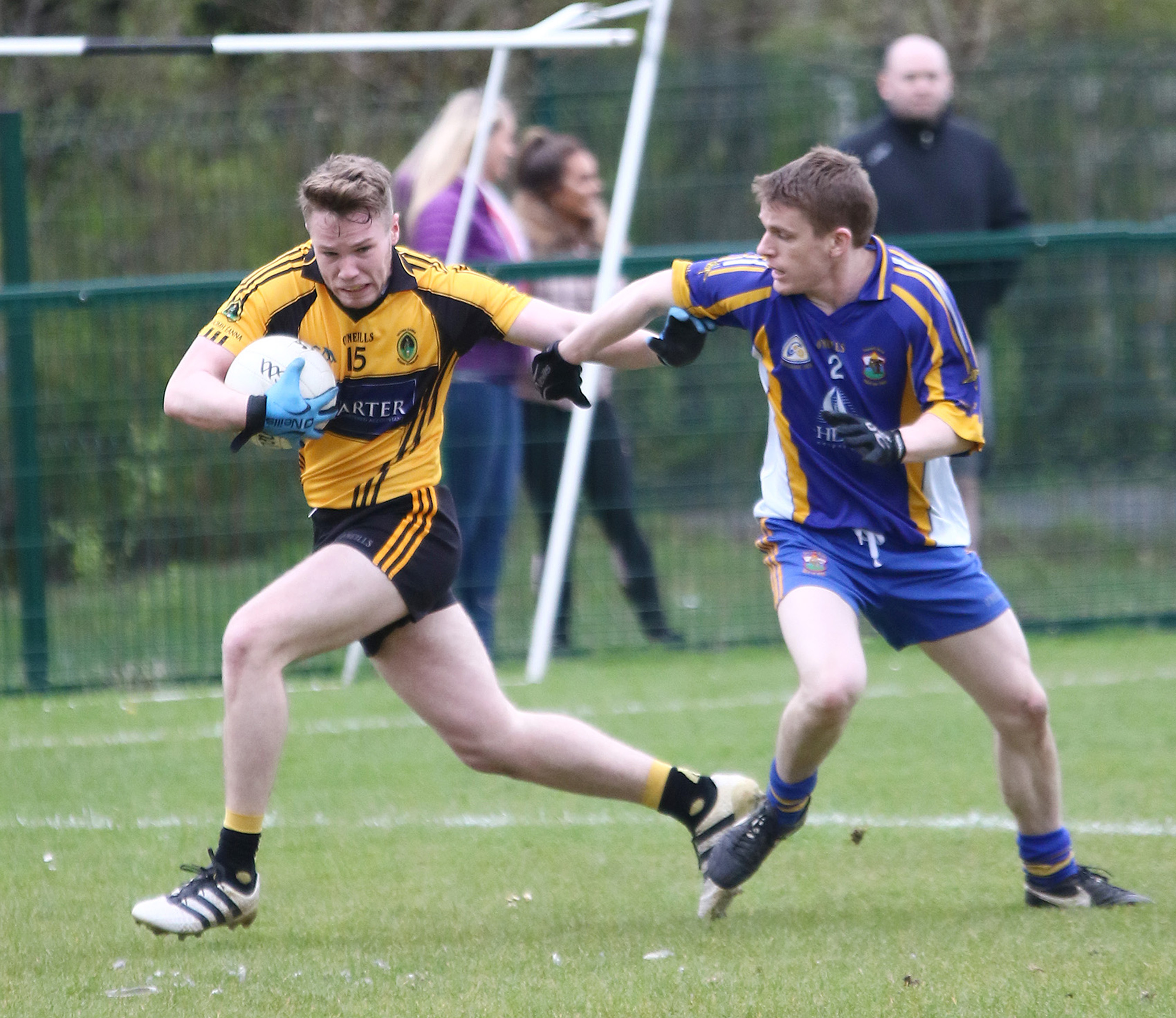 St Enda’s attacker Ruairi Scott, pictured in action against St Brigid’s earlier this year, will be one of the key players for the Glengormley men when they take on Michael Davitt’s on Saturday

LIKE the cigar-chomping Clay Morrow in the hit Netflix series Sons of Anarchy, St Enda’s boss Declan Steele is urging his ‘prospects’ to earn their cut when they step out against Davitt’s in the Intermediate Football Championship on Saturday.

For a number of seasons, St Enda’s have been earmarked as a side to watch. Blessed with some of the finest young footballers in the county, St Enda’s were tipped by many to go close to the Intermediate title last year, but they were beaten by Dunloy at the quarter-final stage.

A year older and a year wiser, St Enda’s are, once again, one of the leading fancies for silverware and Steele has challenged his side to fulfill their undoubted potential.

“That is something we have been trying to drill into them this season,” said Steele. “The players like Conan (Lyttle), Ruairi (Scott), Peter (Healy) and Odhran (Eastwood) are all around 20 or 21 years of age. Now is the time for them to step up.

“They can no longer be called promising young footballers. “They have had a few years to adapt to senior football. There is no time like the present and I think they have already shown they are well able to play senior football. “That’s what we are trying to preach to them and hopefully on Saturday, they will show the kind of footballers they are.”

“Among those teams, you have ourselves, Moneyglass are an excellent team, Rasharkin can’t be ruled out, Dunloy, who beat us in the Championship last year, St Brigid’s as well. “You could make a case for at least six teams. It remains to be seen who will go on and win.”

St Enda’s have a number of injury concerns ahead of Saturday’s Championship clash with captain Conor Maxwell already ruled out with a knee injury. Antrim star Peter Healy is easing his way back to fitness following a groin injury sustained prior to the Qualifier defeat to Sligo earlier in the summer. “We have had a good year,” said Steele. “We had a blip there in mid-season when we lost three consecutive matches.

“That was down to a combination of five or six injuries to key players and have a few guys away on holiday. “Slowly but surely, we are starting to get our squad out, but at he same time, we have now lost another two key players. “Damien Gault and Kristen Healy suffered bad head injuries last weekend against Moneyglass. “It remains to be seen if they are going to be fit to play on Saturday.

“We are looking forward to the challenge against Davitt’s. We are not in any way underestimating the challenge they will present to us. “Conor Maxwell, our captain is out with a knee injury. Peter (Healy) is starting to work his way back to fitness. “He was missing for about seven weeks. He played half an hour against Moneyglass.

“It is a case of not throwing him in at the deep end and building his fitness up slowly over the next week or two because he is a very important player for us. “We are hopeful that he will get some game time against Davitt’s, but it is unlikely he will start. “Peter is a player who we have rated highly and now the rest of the county has seen what he is capable of. He has a great turn of speed, he is strong and he is good on the ball.”

St Enda’s remain in contention for the second promotion berth in Division Two with just two games remaining. The Glengormley side have a game in hand (against St Brigid’s) before facing Division Two champions Glenavy in the final game of the season. Steele knows his side cannot afford to get carried away with the prospect of promotion which such an important Championship game looming this weekend.

“We know the last few games have been win or bust. We play Glenavy and St Brigid’s, but we still wouldn’t underestimate them,” added the St Enda’s boss. “It is all to play for. Every game from now to the end of the year is a Championship game for us.”

“Our target was to secure Division One football and we make no bones about that. “Division Two is a very competitive division and a lot of teams are of an even standard.”

While St Enda’s will be hoping to seal a place in Division One in the coming weeks, their Championship opponents Davitt’s staved off the threat of relegation last weekend with a win over Dunloy. Manager Michael Brady feel his side are a match for anyone when they are at full strength, but he will be without Crusaders goalkeeper Sean O’Neill on Saturday. Although his Irish League commitments would have ruled him out, the Davitt’s midfielder is currently sidelined through injury.

“We didn’t get off to a great start and it got progressively worse,” said Brady. “We just couldn’t get our full team out. “We finished with two wins on the trot to stay up. On Saturday, we should have a full squad bar Sean O’Neill. “You sometimes wonder why these games are played on a Saturday, but that’s just the way the cookie crumbles. “Sean is injured at the minute anyway, but he has been helping us out on the line over the last few weeks and he is a great speaker. “If we turn up on the day, we’ll put in a good performance. It is about mental toughness. “We are a good enough to put it up to any team – they are still a young team. “If they play to their potential, we’ll be in with a shout.”

Davitt’s will be hoping to banish the memories of last year’s Championship capitulation when they suffered a 3-21 to 0-1 first round defeat at the hand of Aldergrove. “It was a disaster – it was embarrassing,” recalled Brady. “That’s what I have been emphasising over the last few weeks – we can’t go down that road again. It was tough to watch. We gave up after 10 or 15 minutes.

“You have to get through the tough times and not fold. We folded last year. “They have to learn from it and hopefully they have. “This year, we have come back into games after a bad start. “We got a real drubbing from St Enda’s earlier in the season so we know what we are up against.”

“The side we will have out on Saturday will be completely different from the team we had out in the league so that is a positive for us. “If we can get off to a good start and be there or thereabouts after 20 minutes, we’ll be there at the end.”