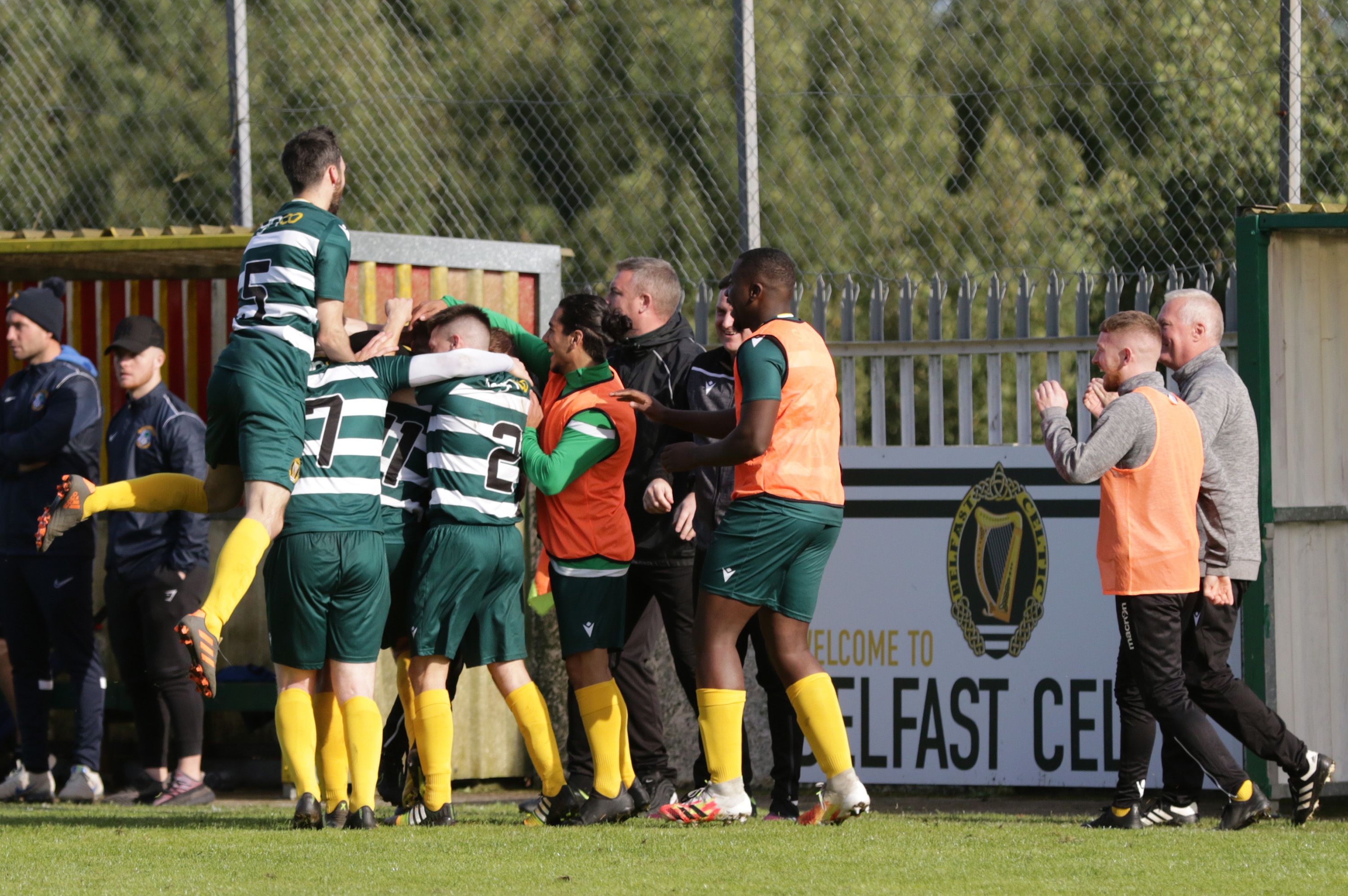 The hosts did have to battle back from going a goal down midway through the opening half, but flipped this cup tie on its head with two goals in three minutes towards the break.

Celtic extended their lead early in the second half only to concede straight after, but the hosts again landed a quick fire brace to seal their passage into the last eight.

On a perfect autumn day, this game opened as brightly as the afternoon sun with both sides getting the ball down and passing it about, looking to carve out scoring opportunities and it was the Division club who was first to threaten with Kevin McGovern's shot going out for a corner before he had a snapshot what just didn't have enough purchase to fully test Paul McLaughlin in the Celtic goal.

The hosts did begin to get more joy on the front foot with man-of-the-match McParland forcing a good save from Daire McAuley and then he played a one-two with Kevin Lynch before his shot whistled just inches outside the post.

McParland was leading the charge for the hosts and he again called McAuley into action, but Immaculata looked dangerous when attacking too and McGovern got a shot away at the back post from a cross, but couldn't direct it on target.

The Mac wouldn't have long to wait for the opener as after Emmett Templeton headed wide from a Stephen Tully free-kick for the hosts, the Divis outfit went straight upfield with a good ball into McGovern seeing the striker get a bit of space and he coolly slotted under the legs of McLaughlin to give his side a 1-0 lead on 23 minutes.

Belfast Celtic shrugged off this setback and were straight back on the attack with a lovely turn from Kevin Lynch putting Templeton through, but he was closed out and poked wide.

The equaliser arrived on 39 minutes as a long ball upfield saw Darren Stuart knock it into the path of McParland who finished well with McAuley rooted to his spot.

It would get even better three minutes later as the roles were reversed as this time it was McParland the provider as the ball broke to Stuart who rifled home and turned this game o9n its head at the break with Celtic 2-1 up.

There was no let-up after the break as four minute sin it became 3-1. Celtic managed to turn Immaculata over with the ball sprayed out to the right with McParland providing an excellent low finish, drilling into the bar corner.

However, Immaculata were right back in the game just three minutes later as a great ball from Garry McVicker out on the left wing found Caoimhin Slane free at the back post to head low past McLaughlin.

Immaculata enjoyed plenty of play without reading anything of note and their spell was ended on 68 minutes as McParland completed his hat-trick and did so in some style, picking up the ball outside the box and thumping an unstoppable shot into the top corner.

It was effectively game over just two minutes later as McParland's low cross broke to Kevin Lynch who lashed high into the net.

The remaining 20 minutes began to Peter out a little, but Immaculata were not for giving in and their efforts were rewarded two minutes into added time as a ball chipped through to McGovern saw him produce another good finish for his second of the afternoon, but this was mere consolation as Belfast Celtic advanced.