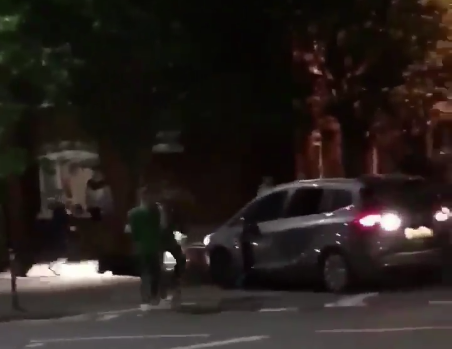 A woman has been arrested after a 17-year-old boy was injured in a suspected hit-and-run crash in north Belfast at the weekend.
The incident occurred near Oldpark Square around 1.20am on Sunday.
The 30-year old woman is being questioned in relation to a number of offences including arson and driving offences, including aggravated taking and driving away, driving while disqualified and driving without insurance.
The teenager was taken to hospital for treatment having suffered injuries to his ankle, leg and hip. However, his injuries are not thought to be life-threatening.
Sergeant Greg Dawson said police had received reports of a grey Vauxhall Zafira being driven dangerously in Oldpark Road and Ardoyne Avenue areas before being involved in the collision with the boy.
“We would appeal to anyone who saw this car being driven erratically, witnessed the hit-and-run incident or has mobile phone or dashcam footage of either,” he said.
The car was later found burned out on the Cliftonville Road at around 4.15am.
"We are treating this incident as arson, “added Sergeant Dawson.