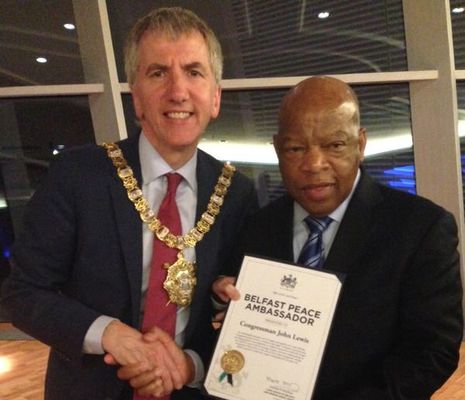 He is one of the epic heroes of the black civil rights movement and his passing has ushered in a full week of mourning before his funeral service today.

But not many people realise that Congressman John Lewis was also a hero of the people of Belfast - being honoured with a mural and by the conferring of a civic ambassadorship in recognition of his life-long struggle for justice.

Alongside escaped slave and legendary abolitionist Frederick Douglass, who lectured in Belfast in 1845 in the first 'Black Lives Matter' protest in this city, and now George Floyd,  Congressman Lewis also enjoys the unique honour of having a mural in his honour on the West Belfast International Wall.

When he made a lightning visit to Belfast with a peace-building delegation in April 2014 — which included Hawaiian Senator Mazie Horino, then the only immigrant in the US Senate — the Atlanta Congressman was rightly feted for his leading role in the early days of the black civil rights movement.

John Lewis was one of the 'Big Six' leaders of groups who organized the 1963 March on Washington, and he fulfilled many key roles in the civil rights movement and its actions to end legalised racial segregation in the United States. In 1965, Lewis led the first of three Selma to Montgomery marches across the Edmund Pettus Bridge. In an incident which became known as Bloody Sunday, armed Alabama state troopers and sheriff police then attacked the nonviolent marchers. There were emotional scenes this week when his horse-drawn hearse carried his remains over that same Alabama bridge.

He was born the son of sharecroppers on February 21, 1940, outside of Troy, Alabama.  He grew up on his family's farm and attended segregated public schools in Pike County, Alabama.  As a young boy, he was inspired by the activism surrounding the Montgomery Bus Boycott and the words of the Rev. Martin Luther King Jr., which he heard on radio broadcasts.  In those pivotal moments, he made a decision to become a part of the Civil Rights Movement. Ever since then, he has remained at the vanguard of progressive social movements and the human rights struggle in the United States.

As a student at Fisk University, John Lewis organized sit-in demonstrations at segregated lunch counters in Nashville, Tennessee.  In 1961, he volunteered to participate in the Freedom Rides, which challenged segregation at interstate bus terminals across the South. Lewis risked his life on those Rides many times by simply sitting in seats reserved for white patrons.  He was also beaten severely by angry mobs and arrested by police repeatedly for challenging the injustice of Jim Crow segregation in the South.

Until his death, he remained true to the gospel of non-violence action to achieve justice. "The movement created," he says, "what I like to call a non-violent revolution. It was love at its best. It's one of the highest forms of love. That you beat me, you arrest me, you take me to jail, you almost kill me, but in spite of that, I'm going to still love you."

A unapologetically upbeat politician, he was also known for his sense of humour and his dance moves — as seen in the video below.