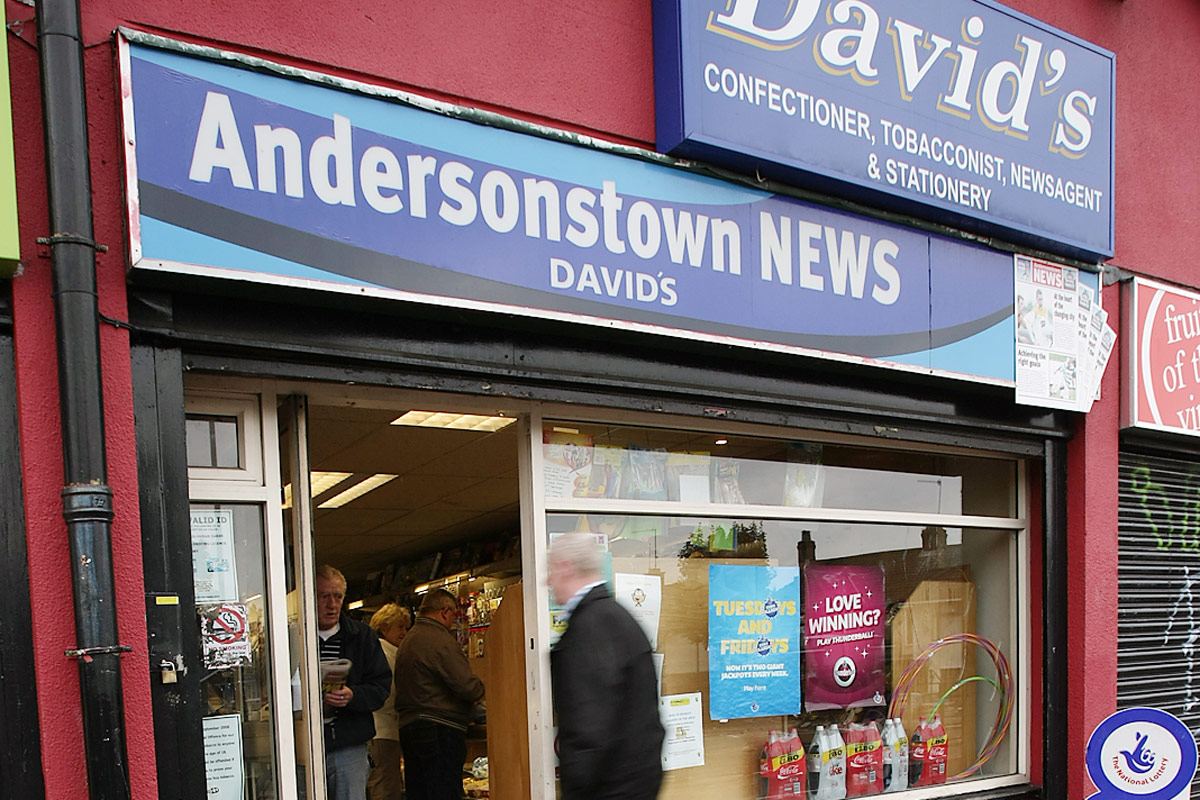 THE staff of two local convenience stores have spoken of their terror after being held up by an armed gang on a vicious crime spree across South and West Belfast.

David’s Newsagents in Ladybrook Park and Greenway’s on the Stewartstown Road were targeted in the spate of robberies, which began on the Lisburn Road at the Finaghy News convenience store on Friday morning.

The owner of a bakery who came to the aid of the Lisburn Road convenience store staff  was slashed by a knife and run over by a car as he tried to tackle the armed robbers.  The thugs then made their way into West Belfast where they targeted David’s Newsagents first.  Speaking to the Andersonstown News shortly after the robbery took place, a shop assistant at David’s Newsagents described how a customer in the shop at the time was also injured in a knife attack during the robbery.

“Three men entered the premises with one brandishing a knife,” said the shop assistant, who did not want to be named. “A customer was in the shop and they told me to open the till for the money.  I opened the till and the customer had his  wallet in his hand at the time.  They tried to get his wallet and tried to stab him with a knife.  Then there was a scuffle in the shop which ended up out in the street, and another fella went for him [the customer] with a knife and a pole, and I don’t know what happened after that.  I then ran and phoned the police.”

The shop assistant said the customer had to receive hospital treatment for his injuries.

After robbing David’s, the thieves made their way to Greenway’s Shop on the Stewartstown Road.

“My son and I had just opened the shop, my son was doing the papers and I was behind the counter serving people when they came in,” said the shop owner, who did not want to be named.

“One assailant came in with a knife and a hoody over his head and shouted ‘Open the till, open the till!’  I thought it was joke so I didn’t bother.  The next thing another taller guy came in and went for my son and the other one came around the counter to me with the knife and told me to open the till.  So I ran to hit the panic button but couldn’t get that far. I turned round to see that my son had been grabbed by the throat so I ran back down to the counter.  The two of them came back around this side of the counter and lifted cigarettes and took the till drawers.

“They then threatened us with a knife and a hammer.”

Police intercepted the gang as they made their getaway from Greenway’s shop and a high-speed pursuit ensued  through Lenadoon, Poleglass and along the back roads of West Belfast torwards Lisburn. A police spokesperson said  that no arrests were made in connection with the incidents and that enquiries are still ongoing.

Local Sinn Féin Councillor Matt Garrett appealed for anyone with information on the robberies to contact police.

“These were particularly violent robberies carried out by people who are a scourge on society,” said Councillor Garrett.

“Small businesses are under severe pressure as it is in the current economic climate without this happening to them.  These shops are a lifeline to some communities and are owned and staffed by people from the communities they’re based in, so robberies like these only serve to cause damage to communities and I condemn them.”

“There’s a lot of anger in the area over this. People know the local business traders as they are part of the local community and provide an excellent service,” he said.

“There’s much anger that they should be targeted like this.”

Gerry McConville, Director of the Falls Community Council, called the robberies an attack on the community.

“These small shops are a lifeline to people in the areas they are based in,” said Mr McConville.

“They provide a much-needed local service, especially for people like the elderly, and on behalf of the Falls Community Council I utterly condemn these robberies.”

It is believed a Subaru-type car was involved in the robberies and anyone who saw anything suspicious is asked to contact the PSNI on 0845 600 8000 or anonymously via Crimestoppers on 0800 555 111.