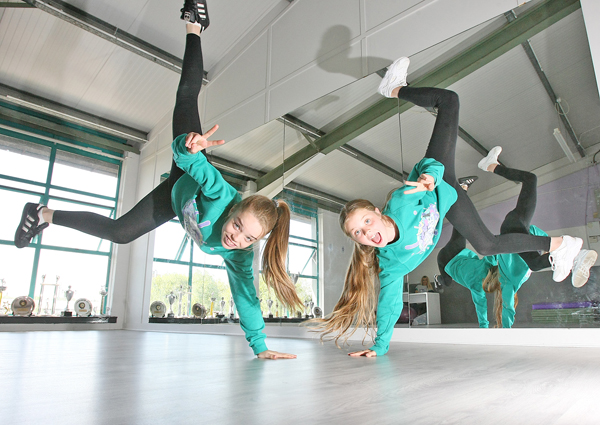 Meghan Sewell and Holly Sullivan of the hip-hop dance group, Prime Intensity Dance Crew were picked to perform at the Justin Beiber concert in Dublin.

TWO best friends from the Grosvenor Road joined Justin Bieber on stage on Wednesday night in Dublin – performing a dance routine alongside the Canadian superstar.

11-year-old Meghan Sewell and 12-year-old Holly Sullivan were picked from thousands of hopefuls who auditioned across the Island to perform at the sell-out RDS Arena show. Part of the hip-hop dance group Prime Intensity Dance Crew, the girls are the only two out of the six chosen who are from the north.

Prime Intensity Dancing coach Shannon Mateer confessed the hip-hop group were a little skeptical when first told of the auditions.

“I had seen a video online with instructions on how to audition, which was basically that the girls had to learn the routine and also say a bit about who they were and what city they wanted to dance in,” she explained.

“When I first asked the group to dance half of them tried to go home, they just didn’t believe it was actually possible their audition could land them a performance with their idol,” laughed Shannon.

“Although the girls auditioned separately as soloists, Meghan and Holly are dance partners and have won many All-Ireland titles and together – they take home first place in almost every competition they take part in. Just recently they qualified in solo, double and team for the Worlds in Glasgow. But the Bieber show is just another level for them and an unbelievable opportunity. When you see the girls dance together its just magic, they really are amazing.”

The global competition was launched online to find dancers for his song ‘Children’ in each city he tours.

Both Holly and Meghan first joined Prime Intensity during its opening night almost four years ago and it appears they have been preparing for this day ever since.

“When we first started me and Holly used to dance to Justin Bieber’s song ‘Baby’ and record ourselves dancing to it and now were actually going to be on stage dancing with him,” said a hugely excited Meghan.

Ahead of the show the young dancers admitted they were feeling nervous about their performance but that said the excitement and love of dance – and a large dose of adrenalin – would help them through the night.

“We’re both really nervous but I think we’ll be okay because once we’re on stage the excitement will really kick in,” said Holly, “but hopefully well get an autograph –and a picture with him!”

Prime Intensity is always looking new members. Classes are on Tuesday and Thursday at the Westlink Enterprise Centre and Wednesdays in Lenadoon. More information can be found on their Facebook page.