Young Saffrons hoping to go one better against defending champs 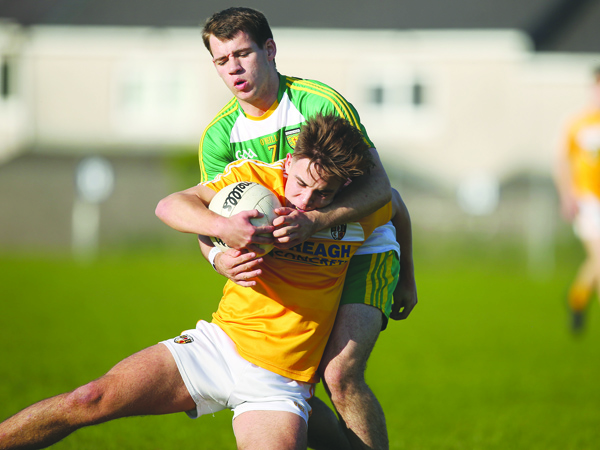 LESS than a year ago, Donegal were put to the pin of their collar by Antrim in Corrigan Park and, on Sunday, the defending Ulster minor champions host the Saffrons in Ballybofey as the begin the defence of their title (2pm).

After beating Fermanagh in the Ulster preliminary round, Antrim lost out to Donegal 2-11 to 2-7 having led by five points with 10 minutes remaining.

Like their senior counterparts, Antrim minors have already been written off before a ball has been kicked in this year’s Ulster Championship and that suits manager Hugh McGettigan just fine.

McGettigan knows his side are judged on results, not performances and Antrim were the only team in not to qualify for the Ulster Minor League play-offs.

“It is a different year with different teams. We played them in the league and we lost by a couple of points (2-13 to 3-8),” said McGettigan.

“That will give us a bit of confidence but we are playing Donegal in their own back yard. “They are the Ulster champions and they have already won a trophy this year after winning the Ulster Minor League Shield.

“They will be looking for another Ulster title and it will be a very difficult game.

“We had a reasonable Ulster League albeit we were the only team not to make the play-offs – you could say we were in ninth best team in the Ulster Minor League.

“That was disappointing but we have regrouped and we are working hard. We like to go in under the radar anyway. If we turn up on the day, we have a chance.”

It has been a busy few weeks for McGettigan with the Ulster U17 competition also being played in May.

Antrim scored a shock-four point win over Armagh before losing out in Saturday’s semi-final against Cavan at Clones, losing 5-11 to 2-11.

However, McGettigan has hit out at the GAA for showing a lack of respect for the U17s, who will miss out on minor football next year when the grade switches from U18 to U17.

“We have been busy trying to work with the U17s. We are operating one panel for the U17s and U18s,” said McGettigan.

“The U17 competition is the only one they will get – they lose out next year when the whole competition changes.

“We decided to work both squads together. Some counties had separate panels. We would have about five or six players in the U17 squad that we would be looking at for the minors.

“They mightn’t all start but they will be pushing for positions.

“Donegal took their best U17s for the minors and wouldn’t let them play U17s and they were put out in the first round (against Tyrone).

“Some counties took one view of it, we took another.

“The U17 competition will really help develop players but the U17s are being treated like rubbish by the GAA.

“They are being treated very poorly. The Armagh game was played at Pearse Og, not the Athletic Grounds and there was no build up to it.”

McGettigan also feels that moving the age of minors from U18 to U17 is simply removing one problem and creating another in terms of players sitting exams.

The changes were introduced to avoid interrupting Leaving Cert students during their exam time but McGettigan pointed out that, in the North, GCSE students will now have to cope with the burden.

“A lot of them are doing GCSEs. We are trying to treat our lads with respect – that’s why we trained them with the minors,” added the Antrim minor boss.

“We are trying to do the right thing by them and give them a good level of training.

“The minor competition was changed without consideration for lads sitting GCSE exams. It will cause problems down the line.

“Maybe they would have been better moving the minor to U19 but we will be debating this for the next 50 years.”

This year, the Antrim senior management gave the best up-and-coming talent in the county the chance to prove their worth during the Dr McKenna Cup and National League campaigns.

Former minor star Conor Small grabbed the opportunity with both hands and will be pushing for a start in the senior game while the likes of Ruairi Scott, Odhran Eastwood and Seamus McGarry, who were all minors in 2014 were all part of the extended senior panel.

Yet, McGettigan feels a large crop of underage stars need to emerge at the same time in order to boost the fortunes of the senior side rather than a drip feed of talent year on year.

“The difficulty is that step between minor, where Antrim have been fairly competitive in recent years, to U21 and then into senior,” said the Rossa clubman.

“It is just about managing those players the whole way through.

“I know senior management have gone with a young team this year and I hope we are going in the right direction.

“It would be great to see more players going to university and getting Sigerson football like Matthew Fitzpatrick (St Mary’s) and Peter Healy (UCD) this year.”

Antrim have a handful of last year’s minors back for the 2017 campaign including captain Eoin Nagle (St Enda’s), Joe Maybin (Cargin), Eoghan McCabe (St Gall’s) and Liam Quinn (Creggan) who all featured in the first round win over Fermanagh.

Quinn suffered a broken leg in the closing stages of the win over the Ernemen but recovered to play a key part in the MacRory Cup success for St Mary’s Magherafelt earlier this year.

However, Seanchan Duffin (Moneyglass) is an injury doubt for the game against the 2016 Ulster minor champions. While Antrim failed to make the Ulster Minor League play-offs, the heaviest defeat they suffered was their five-point loss to Tyrone, who went on to win the title.

The Saffrons also got to within one point of Derry and had five points to spare over Fermanagh. Those results, coupled with the success of 2016, indicate that Antrim are making genuine strides at U18 level.

Whether that it enough to overturn Donegal in Ballybofey this Sunday remains to be seen but it would be no great surprise if McGettigan’s side give the hosts another almighty scare.