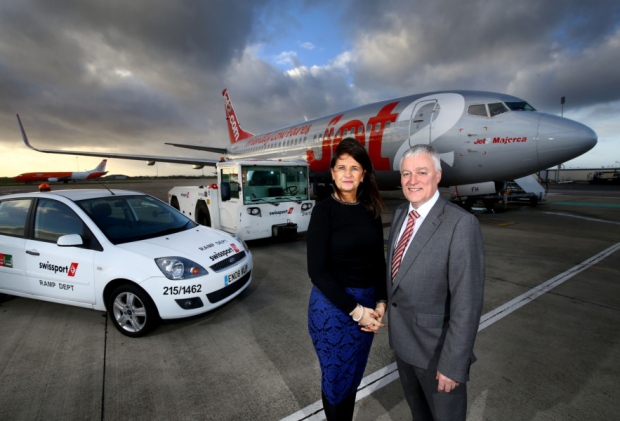 The expansion will increase the company’s workforce at the airport to 350 and turns it into the airport’s larges single employer. The new jobs will encompass a number aspects of the company’s services, including loading and unloading of passenger baggage and handling bulk freight.

10 of the new posts have already been filled with the recruitment under way to find the other 90 new workers. It’s estimated the wages paid out to the new workers will add some £1.6 to the local economy.

Jean Foster, Swissport Manager, said: "Swissport is clearly delighted with the growth in passenger numbers at International. There will be a significant increase in the number of aircraft movements and that means greater demand for the wide range of services we provide.

"We're an essential cog in the wheel at the airport, and this expansion will see us confirmed as the single biggest employer on the site. This year, we expect to see double-digit growth in passengers and that's powering our rapid expansion plans."

"This is the second big job announcement we have made in as many weeks and is a boost not only for South Antrim but for the Northern Ireland economy," he said, referring to 40 new jobs on the site announced recently by security firm ICTS.

"These jobs are demand-driven. The fact that they do not depend on a single penny of support from the government means we're seeing a win-win for the wider economy and the taxpayer.

"This airport has the potential to create thousands of new jobs and hundreds of new businesses if ministers gave the sector the relatively small levels of support it needs to attract new airlines and open new routes.

"We also need ministers to confront the issue of Air Passenger Duty. It's the ball and chain that's holding us back. Without it, we could make a major contribution to growing the private sector economy in Northern Ireland."