A law firm with a difference 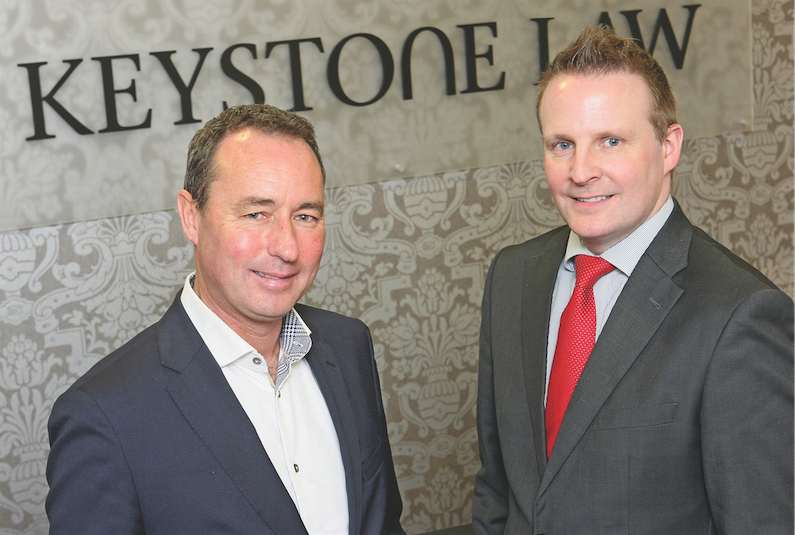 A dynamic and ever expanding law firm in the heart of Belfast city centre, Keystone Law’s use of bespoke and rapidly developing technology sets it apart from the competition.
Founding partner John McMahon explained that Keystone began life back in 2002 in London and was set up by current managing director of the London operation James Knight “who had a vision for law firms to operate in an entirely different way than they had done historically”.
“Instead of people taking huge offices in the city and having three, four hundred employees, he wanted to have a novel approach to practice law where people could have the chance to work from home, have their own smaller office or even work outside of the city. To make that work, to make it attractive to the client he knew that investment in technology would really make the difference.”
John continued: “Our Adelaide Street office is a half-way house so to speak. We have members of staff specialising in all areas of law and are always on the look out for new lawyers who want to adapt to how we do things at Keystone. Our model really gives staff a flexible way to work or the attraction is there for those maybe wanting to return home from England,” he said.
At the time of its Belfast inception Keystone started with John and his fellow founding partner Danny McKay as well as a secretary.
“But we’ve been growing ever since,” explained John.
“We appointed senior commercial property solicitor Jim Houston, formerly of Cleaver Fulton Rankin and Clifford Chance lawyer and Translink’s General Counsel, JP Irvine.”
John spoke of how he and JP will be representing Keystone Law at the upcoming Belfast Media Group/Irish Echo New York-New Belfast conference in June.
“The two day event will be a chance to meet potential clients, source inward investment from the States and ultimately discuss what Keystone has to offer and how we have the ability to attract the best people from the best firms.”
Keystone celebrated further success towards the end of last year when its London office became the third UK firm in history to float on the London Stock Exchange which saw a rise of over 20 per cent from £1.60 to £1.96 in its first hours of trading. Currently shares are priced at £2.35.
“The law is no different to any other industry,” said John. “You have to move with the times. It’s an exciting time for Keystone Law across the board. Not only will the London firm’s flotation increase brand recognition and lend further credibility to the business offering for clients and lawyers, it will also provide a strong platform through which to facilitate growth – not only for the wider Keystone group but, importantly, for Keystone Law Northern Ireland.
“We look forward to seeing what opportunities the listing will provide as our practice here in Northern Ireland continues to grow and flourish.”