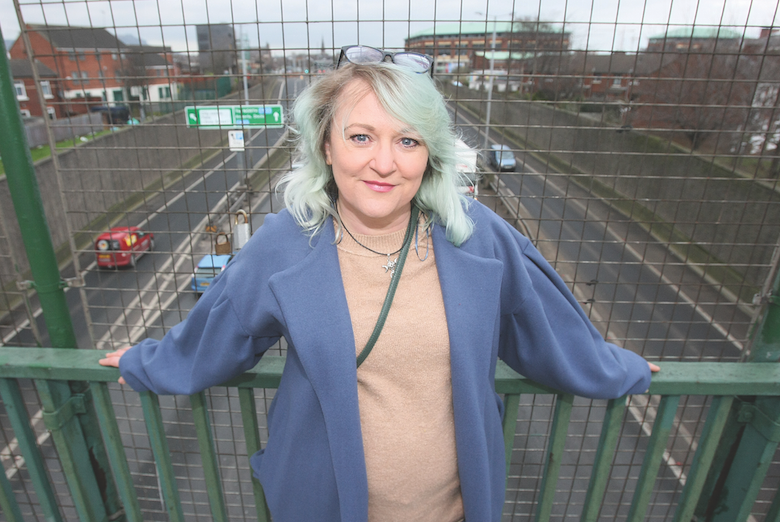 ON THE RISE: Brenda Gough whose short film has been nominated for an IFTA

West Belfast woman Brenda Gough is no stranger to hard work. The Iris Drive woman went back to college at the age of 40 and since then has pursued her dreams by working on and scouting for locations for some of the biggest and best-known films and TV shows of recent years.
Brenda has worked on shows such as Game of Thrones and Line of Duty and films such as Your Highness, Dracula Untold and The Bookshop.
Her hard work and determination has paid off, as one of the films she worked on has just been nominated for an Irish Film and Television Award (IFTA).
Inspired by a true events, Cry Rosa tells the story of a bullied, mixed race girl who is the only non-white pupil at a rough inner city Belfast secondary school in the 1980s.
Filmed in various locations throughout West Belfast, Cry Rosa stars Kelly Gough, Martin McCann and Grace Fleming. The film was produced by Emma-Rosa Dias for Afro-Mic Productions.
Speaking to the Andersonstown News Brenda said: “This short film is based on Emma-Rosa Dias’s life. Her father was black and her mother was from here. The film tells her story, what she experienced at school at the hands of other children. It tackles bullying, what she went through in the 80’s as a young child, it also tells the story of her bully and why they felt the need to do what they did.”
Speaking about the IFTA nomination Brenda said: “We are all delighted to have been nominated, the IFTAs are like the BAFTAs and this is the only film from the north to have received a nomination. We are all delighted for Emma, this is her story.”
Brenda worked as the location manager and used some well-known West Belfast locations in the film including St Mary’s CBGS on the Glen Road, Clonfadden Street and the Divis flyover.
“There were some locations already picked out but I knew they weren’t going to work, so I showed them a few other options,” she said. “I knew the school they were using wasn’t right, the director wasn’t happy with the exterior as it was too modern. We needed a school that had an 80’s look so I suggested St Mary’s school on the Glen Road. It turned out to be perfect.
“The school were exceptionally helpful, we used the exterior of the school plus some of the corridors.
“It was almost like a barter system. We ask people to let us film for minimum payment or for free and in return we offer our services. We go into school and speak to drama students or moving image students.”
Discussing what drives her Brenda said: “I’m a stereotype, I’m a single mother from West Belfast who went back to college at 40. I want to show people that it’s possible.
“Rebuilding your life at 40 is quite scary. Society tells you that if you reach a certain age as a woman then you’re too old, I feel that you’re only as old as your attitude.
“I told myself that I had two choices, I could either muddle through day by day making the bear minimum or I could work to provide for my children short term and long term. It was about taking control of my future for myself.
“When Emma rang me to do this short film it was the first time I’d ever taken on a project by myself, but it was another woman who gave me a chance in the industry. I saw the obstacles she had to overcome, she inspired me, so I said yes.”
She added: “I’m frightened every single day. There was a stage in my life where I was so broken as a person, that I was unable to function as a parent. If you’re not functioning properly for yourself then how are you supposed to parent other people? I couldn’t have gotten where I am today without the love and support of my mum, it’s all about women empowering each other.”