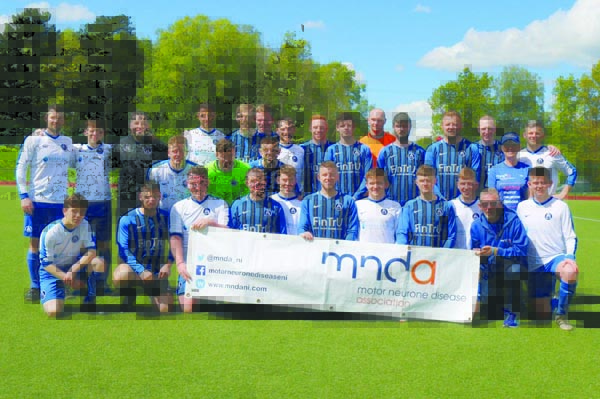 The Aquinas senior team with representatives of MNDA before lockdown

FOR three weeks now, the boys from the Aquinas’ senior team have been pushing themselves to the limit in order to raise a £1000 for the NHS on their Just Giving page.

All that work paid dividends with the current count showing they had more than doubled up on their target. On completion of the challenge donations were sitting at £2610.

The idea came from two of the players Colm Davis and Dee Fitzpatrick.

As part of their lockdown training programme, the players were already involved in regular 5km runs and an online boot camp three days per week.

With the current crisis on everyone’s mind the two players posed the question: “what could we do to help?”

The idea that emerged was to the divide the players into six teams each taking on the commitment to run regular 7km lengths in order to complete six marathons per team over a three-week period.

The challenge also had a competitive edge to it with players and team times being posted on a leader board regularly.

Several of the players recorded some insane times which pushed everyone on to improve with every run.

The entire Aquinas club have been active since we all went into lockdown.

The senior players aren’t the only ones leading the way with their fundraising efforts.

The U10 team took on their own fund raising run to raise money for the NI Children’s Hospice and raised a total of £2000.

Coaches Declan Owens, John McCormick and the club chairman, Hugh McKillop, are incredibly proud of the club’s achievement. Hugh pointed out the importance of keeping everyone at the club as active as possible over the course of this crisis.

“As we have no clear idea how long this situation will last our coaches attention switched to how we could look after the players well-being both physically and mentally,” he said.

“Several of our football family are frontline workers and our admiration for them along with the need to stay active brought us to the idea of running to raise money to help make a difference.

“Reaching out to help in our community has long been a key objective of Aquinas football club and we will continue to use our club structure to help where we can.”

In the past 18 months, Aquinas have made significant contributions to the lives of others if you include gift aid the club have donated £1700 to Rosemount House, £3418 to Motor Neurone Disease, over £3079 to the NHS and a £2000 contribution to the NI Children’s hospice appeal.

“Our strategy at Aquinas has been to use the club structure to fund raise and to date this has been hugely successful,” added Hugh.

“Our St Stephen’s Day family walk is now a part of what this club is about.

“To be part of the Aquinas family comes with a responsibility to make a difference and our players, coaches and parents have been amazing.”

The Aquinas boys have stepped things up to another level over this week with the juniors now at online fitness boot camps and runs being pushed to 10km for the seniors. By the time things return normal there will be some fit players with much to celebrate.