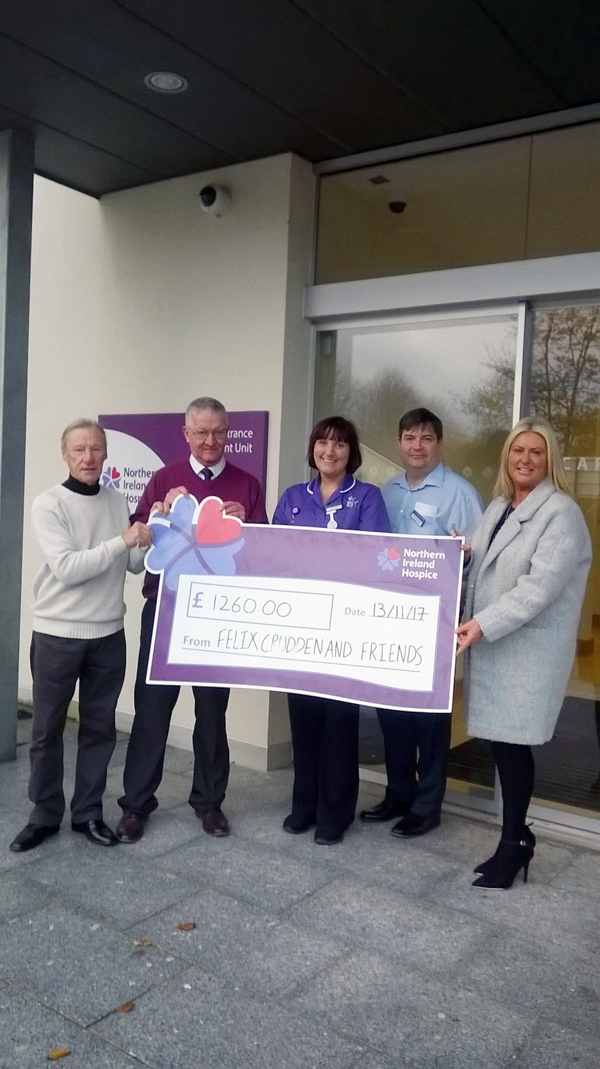 THIS year the NI Hospice launched an urgent appeal asking the public for help to raise £16,000 for urgently needed specialist medical equipment for their patients.

Felix lost his beloved wife Una following her brave battle against Ovarian Cancer in December 2014 and since then he fundraised tirelessly for the Hospice.

The Hospice always had a special place in Una’s heart. Before she passed away she raised over £50,000 for them. She recorded a CD that raised £40,000 and then she bravely shaved her hair off when she was going through chemo.

So proud of his wife’s efforts Felix has continued to raise money to help the Hospice whenever possible.

Along with the help of friends Felix held a special fundraising night at the Falls Bowling Club on October 27 to raise money for their appeal, and an outstanding £1,260 was raised. The packed venue was a musical extravaganza which featured performances from the Marty Fay Band, The Gents and Brian McKenna.

A delighted Felix said he would like to thank everyone who came out to support his fundraising efforts.

“People as always have been so generous. As soon as I put posters up to say I’m arranging a fundraiser for the Hospice there’s never any question, people always turn up and support it.

“The Marty Fay band have been great. He pulls out all the stops for us. I would like to thank everyone who supported the event and donated so generously towards the equipment appeal. Your support will make a real difference to the lives of the patients and their families that Hospice cares for”.

Thanking Felix for his ongoing support and explaining just what a difference support from the local community makes, Noreen Kennedy, Regional fundraising manager at NI Hospice, said: “Everyone at NI Hospice would like to extend a huge thank you to Felix and everyone else involved, for their hard work and for the great amount raised.

“It is fantastic to see the support that the local community in West Belfast provides for the Hospice as we rely on this for the work we do. I would like to take this opportunity to personally thank Felix for his dedication and on-going support to the Hospice and everyone who came along to this event to help raise vital funds towards our equipment appeal so we can continue providing the best care possible for local patients and their families”