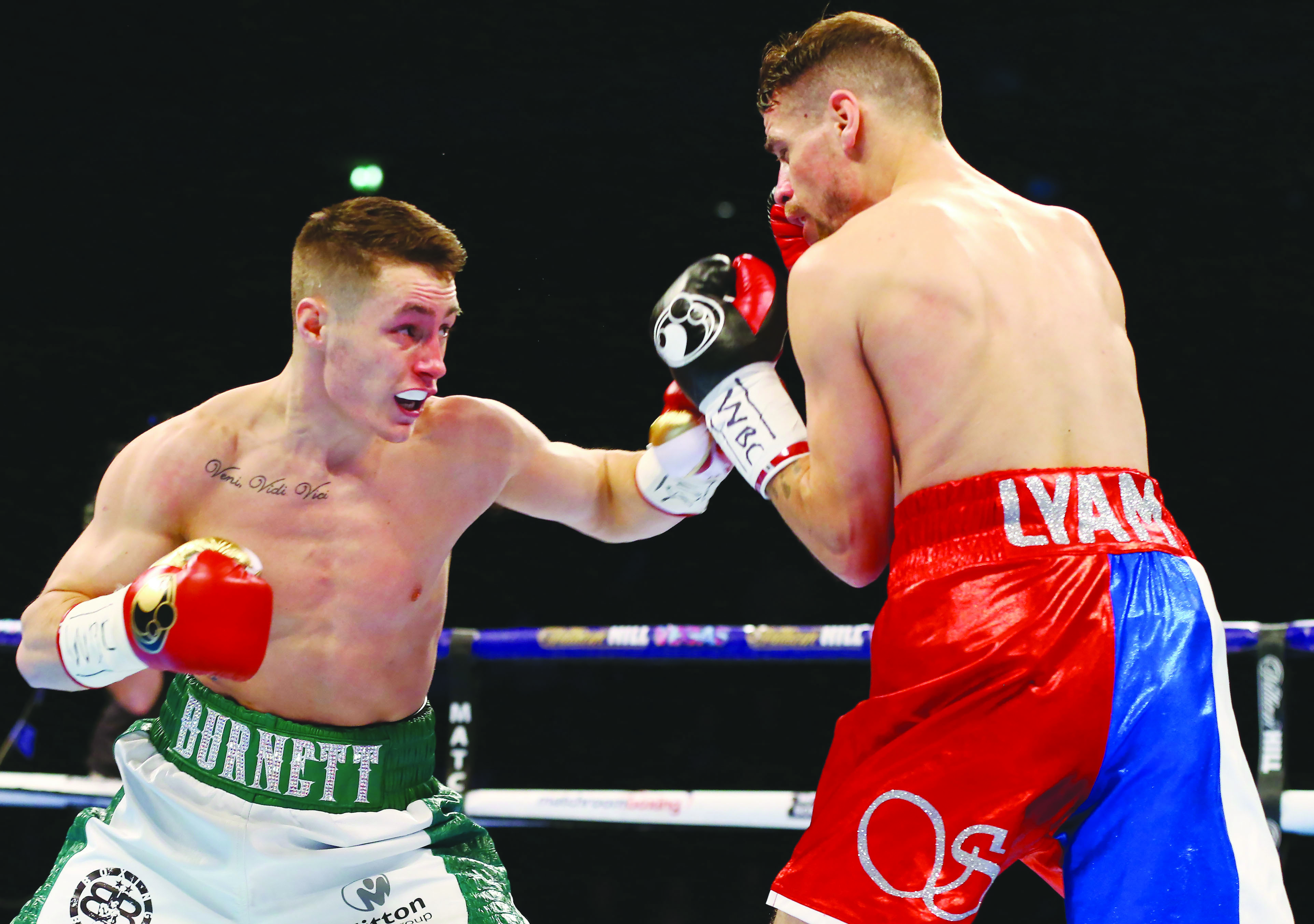 RYAN Burnett says he is ready to make the step up on Saturday night when he puts his British bantamweight title on the line against Liverpool’s Ryan Farrag at the Echo Arena.

The North Belfast man has cleared every hurdle comfortably in his perfect 14 fight career to date, but will go into the lion’s den when taking on the former European champion in his home city.

The 24 year-old Newington native claimed the Lonsdale Belt just under a year ago having already won the WBO European title and later added the WBC International strap as he continues to rise through the world rankings with a possible shot at world honours on the horizon next year, possibly even back in Belfast.

However, to get there he must negotiate what could be a tricky assignment against the 28 year-old Farrag who comes to the ring with a 16-2 record.

“This is definitely a step-up for me, but I’m at the stage of my career now that this is what I need,” said Burnett this week ahead of Saturday’s fight that will be broadcast live on Sky Sports.

“Coming into Ryan’s back yard is definitely something that I need, to get that experience as a fighter. I’m more than happy to do those things.”

Burnett’s last stoppage win will have come almost a year to the day when he steps into the ring on Saturday, but that really says more about the ambition of his opponents since then, rather than a lack of power. After his two round demolition of Robert Kanalas for that WBO European title, he was taken the distance by veteran, Jason Booth when claiming the British title having dropped the Nottingham man in the first round.

Anthony Settoul was also on the canvas during their meeting in Manchester back in February when that WBC International belt was added, but again the Frenchman went into his shell to see the final bell rather than try to turn the contest around and it was a similar story last time out against Mexico’s Cesar Ramirez who tasted the canvas before surviving to the finish.

Considering Farrag is the home fighter and will benefit from the support in the arena there to roar on Tony Bellew whose defence of the WBC cruiserweight title tops the bill on the night against BJ Flores, the Liverpudlian will surely go for the win rather than settle for a points defeat. Burnett is hopeful this is the case as he feels such an approach from Farrag will let him showcase his skills much more.

“If you’ve seen my previous fights, it’s hard to get going because once the fighters know they aren’t going to beat me, they sort of go into their shell and are happy to just survive,” he said.

“You see this as they just hide behind their guard and don’t throw as many shots. They aren’t coming forward as much.

“With Farrag, I think he has got a point to prove and he will have that bite. I think he’s going to come forward and throw shots. I don’t think he is going to rest all night.

Farrag scored a points win over Elvis Guillen last month in what was his first fight back after losing his European title to Karim Guerfi in three rounds back in June. His only other defeat came at the hands of current IBF world champion, Lee Haskins in a Prizefighter tournament back in 2011.

The 28 year-old won the continental strap against former Scott Quigg foe, Stephane Jamoye 12 months ago so has been mixing it in decent company and is adamant he is a step too far for Burnett at this stage of his career.

“I’m very happy to have the chance to fight for the British title in my home town,” said Farrag at a press conference on Monday.

“I think this might be a fight and a step-up too soon for Ryan. He hasn’t been tested at this level yet, so I will certainly be giving him that test on Saturday.

“With the home crowd behind you, it gives you that boost on the night with everyone shouting your name. You want to make sure you put on a good performance for everyone who comes to watch.

“It’s important I will no matter where I go, but more so at home as you want to keep everyone happy who coms to watch. “Training has gone perfect, so I’m confident I’m going to put on a good show on Saturday.”

Fighting in enemy territory is not something that fazes Burnett who accepts these are the steps that need to be taken at some point of his career and he believes the time is right to make a statement that will catapult him into the world title picture.

“These are the steps on the journey you have to take, so I’m more than happy to come to Liverpool and have a step up. It’s perfect timing for me and it’s something I’m really looking forward to.”