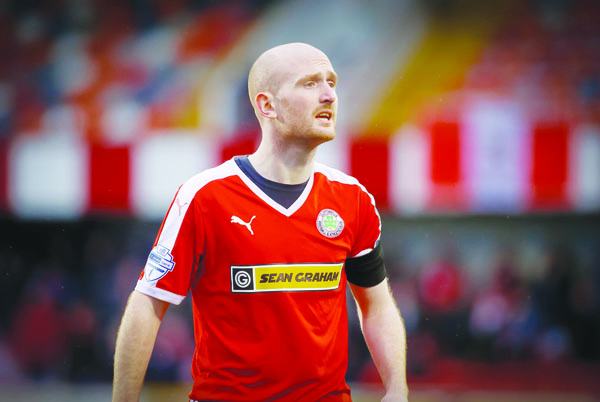 CLIFTONVILLE’S new captain, Ryan Catney admits he is happy to receive the captain’s armband from new manager Barry Gray after the duo met for the first time last Wednesday evening.

Gray has wasted no time in laying down the foundations for next season having met with some of his senior players before he was introduced to the media at Solitude.

The decision to pass the captain’s armband to fan favourite Catney has went down well with the Solitude faithful and the midfielder was happy to accept Gray’s offer.

“Before his press conference he wanted to meet a couple of senior players,” revealed Catney.

“He called me in and we had a good chat for about an hour and he said that he wanted me to be club captain and I was happy enough to accept it.”

Catney is still recovering from his horror leg break in January and is out of contract at the club. The combative centre-midfielder admits that captaincy was the last thing going through his mind as he lay on the Seaview pitch contemplating if he would be pulling on the Reds jersey again.

He has thanked Gray for the faith he has in him and is looking forward to signing a new contract and taking things from there.

“It was the last thing on my mind to be honest,” admitted Catney.

“I’m trying to get over the injury and I’m out of contract at the minute so it’s a great bit of faith from Barry to put a bit of responsibility on me as I’m still recovering from the broken leg.

“I have to thank Barry for it, now I just have to sign a new contract and we’ll go from there.”

After meeting with Catney and other senior players, Gray met the rest of his squad for the first time on Thursday evening.

Catney believes that the former Warrenpoint Town boss made a great first impression with his team-mates and feels he will instil discipline.

“I had a meeting with him on the Thursday and then we had the players meeting afterwards,” said Catney.

“It will be his way or no way and if you’re not on board with him on the direction he wants to go then he’ll let you go.”

It is yet unclear when Catney will be able to pull on the Reds jersey again, despite making huge progress and continuing to work hard under the watchful eye of Gymco personal trainer Gerard Rooney.

Catney is due to meet his consultant this week and hopes the next stage of his recovery will be removing the metal cage from his leg as he targets a return to action during 2017.

“I’m back at the consultant on Tuesday, so I will just take it from there,” Catney said.

“I can’t really give a time frame because I honestly don’t know myself.

“I’ll listen to the consultant and what he says, the first stage will be getting the cage off and then I’m obviously in the gym already so I’m giving myself a head start for when I do get back.

“There’s no real time scale but I’m hoping to get back this year anyway.”