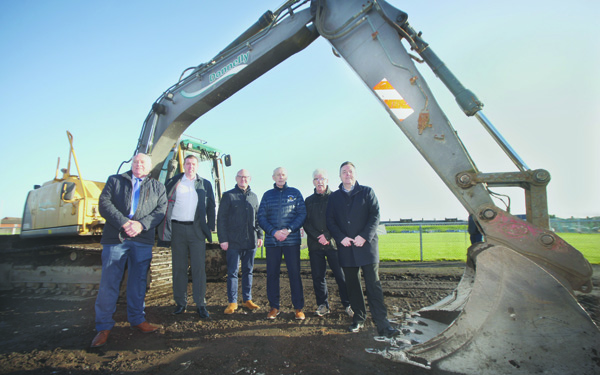 CORRIGAN Park could be ready to host Antrim Club Championship games later this summer as work gets underway on Phase One of the redevelopment work at the home of St John’s.

A 500-seater covered stand along with terracing for 2,000 spectators is expected to be completed in time by August.

Former Antrim chairman and St John’s clubman Collie Donnelly along with the current Antrim chairman Ciarán McCavana had lobbied Central Council and the Ulster Council for funding for the project.

The continued closure and delay in rebuilding Casement Park gave as sense of urgency to Corrigan Park’s development with Antrim officials dubbing the venture their version of Dublin’s Parnell Park.

With the help of funds from Croke Park, the Ulster Council, the Saffron Business Forum, Club Aontroma, the Antrim county board and St John’s GAC, Phrase One of the project is now underway.

Phrase Two would see additionally terracing added to the other side of the pitch and increase the capacity of the venue to 5,000 and club officials are hopeful that additional funding can be secured in the near future to ensure that Antrim’s second county ground is fit for purpose.

Speaking at Monday’s launch, Donnelly spoke of his sense of pride at seeing diggers on the site.

“It has been a long time in the making. This started seven or eight years ago when Corrigan Park was identified as the second county ground behind the new Casement Park,” stated Donnelly.

“We’ve been pushing for this ever since (former GAA Director General) Páraic Duffy’s time and Páraic was a great supporter of the project.

“Today is a great day and we can get this project started for the benefit of everyone in Antrim.

“We are not longer talking about the project, we can now get it over the line in the next six or seven months and we’ll have a facility in Belfast for Antrim Gaels to come and watch our games in comfortable conditions.

“I was in Loughgiel on Sunday for Antrim’s hurling league game against Mayo and for maybe 20 minutes patrons were standing in the rain. Hopefully in time, we’ll have a covered stand at a ground in North Antrim as well.”

This season, the Antrim footballers have been based at Glenavy while the hurlers are playing their home games at Loughgiel.

This weekend, Davitt’s will host a challenge game between the All-Ireland hurling champions Tipperary and Antrim at their new pitch, completed with a 250-seater stand while O’Donovan Rossa have plans to develop a similar sized stand at their Shaws Road home.

In paying tribute to the dedication of successive Antrim county boards, GAA officials, the Saffron Business Forum, Club Aontroma and the St John’s club, Antrim chairman McCavana stated his belief that Corrigan Park’s redevelopment will be the start of a major infrastructure boost in the county.

“It is important to thank all those people who have contributed to getting the project to where it is today. Without them, we wouldn’t be here today,” said McCavana.

“Collie Donnelly and the previous Antrim administration started this off and myself and the current board have picked it up.

“For me, the next phrase in Antrim is the tangible phrase – the things we can touch and see. You can only go to people and ask them to invest money for so long before they ask what they are investing in.

“We now have the structures in place in Antrim where we can start delivering for the people. We have secured the money to get this project done.”

He added: “We are hoping to have planning in place for Casement Park in April and we are looking at a 21-month build.

“Hopefully we can have those projects running in tandem and we can have Casement built in the next two years as the jewel in the crown, not just in Antrim but in Ulster and the entire country.