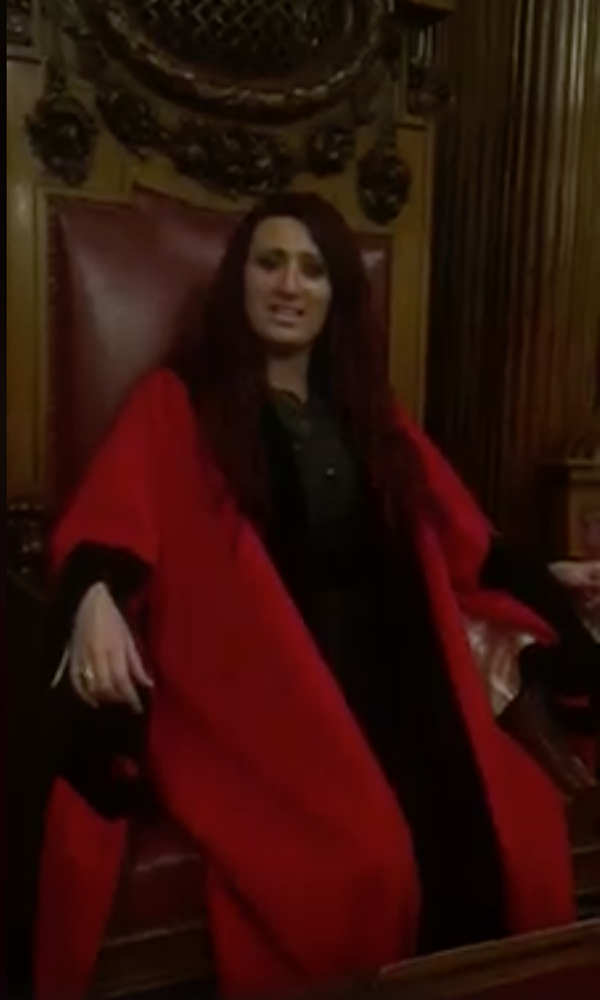 BELFAST City Council have launched an investigation after the deputy leader of far-right group Britain First was filmed sitting in the Lord Mayor’s chair.
A video of Jayda Fransen, dressed in red council robes was posted on the group’s Facebook page.
In the video, she claimed she was back at the scene of the original ‘crime’ and thanked people who had supported her during the ongoing case.
Ms Fransen faces a total of six charges including using threatening, abusive or insulting words during a ‘Northern Ireland against Terrorism’ rally in Belfast last August.
Earlier on Tuesday, Fransen appeared at a brief court hearing to learn her trial date, which has been set for April 6. She denies the charges.
Fransen then visited Belfast City Council with Independent Unionist Councillor Jolene Bunting when the filming of the video took place.
The video has been condemned by fellow councillors.
Alderman Brian Kingston said the video was a “gross abuse of Belfast City Council, the City Hall and the position of Lord Mayor”.
Sinn Fein leader on Belfast City Council, Jim McVeigh said it was a ‘disgrace’ that Fransen was allowed anywhere near such a ‘democratic space’.
SDLP Councillor Paul McCusker added: “The video of Britain First’s Jayda Fransen in Belfast City Hall Council Chamber is outrageous, especially given the fact that she is facing police action for alleged hate speech. It is irresponsible and disrespectful for anybody to facilitate the gross abuse of City Hall in this way.
“Belfast is a diverse and welcoming city, these extremists should be given no platform to spread their hate here.
“Councillor Bunting should be questioned and disciplined for this and I would ask for an investigation as this behaviour is totally unacceptable by these individuals.”
A spokesperson for Belfast City Council said: “Council has been made aware of the video post and is currently looking into the circumstances. The usual procedures for those wishing to film or use council premises were not followed. We received no request nor were we made aware of these plans.”