Croc set to bare his teeth 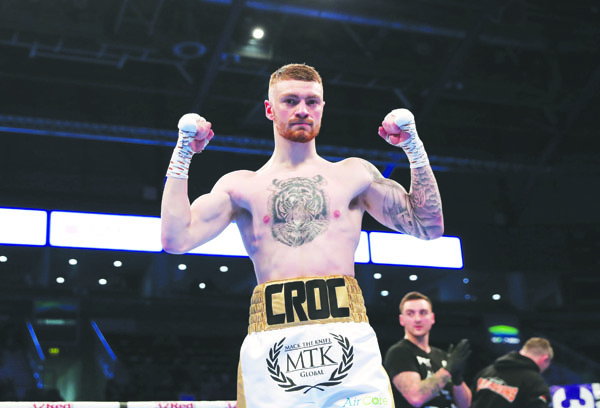 THE ascent towards titles begins now for Lewis Crocker as the South Belfast man gets set for a step-up against former British title challenger John Thain at the Ulster Hall on Saturday night.

The former Holy Trinity amateur has racked up 10 wins from 10 since making his professional debut in March 2017 with the first six of those resulting in brutal stoppages.

Since then, Crocker has been matched with durable opposition who have lasted the pace against the noted power-puncher, but given the Sandy Row man was also an outstanding amateur, he is as happy using his skills as his devastating power.

Initially, Crocker said he was happy to take his time on his professional journey having made the switch as a 19 year-old, but three years in and he is now starting to adjust his focus towards titles.

“This is a good step-up against someone with a good record,” he said of the Scot who arrives in Belfast with a 17-4 record ahead of this eight-round welterweight contest.

“He’s fought for a lot of good titles, so I’m not looking past him at all because I know what I’m up against.

“It’s great to start the year with a fight like this as who knows what could be next. By the end of the year I’d like to be sitting with some sort of a title, so this is the first step towards that.”

‘The Croc’ enjoyed regular action I the first couple of year, but after victory over William Warberton at Windsor Park, injury kept him out of the ring for nine months.

He returned last year with three fights and says he is happy to get started early in the year to maintain that momentum.

“It’s been different because usually I’m off in January and February, so I’m glad to get out here,” he explained.

“I’ve had a good start to the year and a good camp, so I’m looking forward to fighting next week.

“I had three fights close enough to each other last year. I didn’t get too many injuries and I wasn’t kept out over Christmas so everything has gone well.”

Dee Walsh is back in the corner having overseen Crocker’s first couple of fights alongside Ray Ginley, but with the retirement of trainer Gerard McManus, it’s Walsh who is again the man in charge of the boxing side with Dan Anderson taking care of the strength and conditioning.

Walsh was a hugely skillful operator back in his own fighting days and is an avid student of the sport.

His mantra was always to ‘hit and not get hit’ so Crocker is hoping to add that slick movement and defence to complement his natural attributes.

That will make him an even more rounded fighter and he hopes to showcase that against Thain with victory pushing him into view of a first title opportunity.

“Dee is a key element of this camp,” confirmed the 23 year-old.

“It’s great to have him because he brings a lot of boxing knowledge and he helps me to perform better.

“I’m confident and believe in myself for this fight. Adding that (slick defence) to my game is going to make me a better fighter. It’s great to have that for this fight because this is going to be a big step-up for me.”